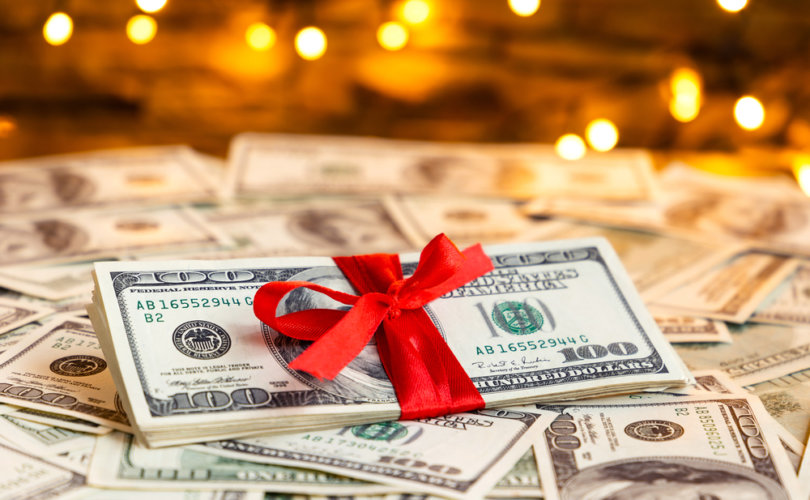 EDINBURGH, Scotland (LifeSiteNews) — Advent is traditionally a time of penance, almsgiving, fasting, and abstinence, which is why, in Catholic cultures, nobody ate meat on Christmas Eve. In Italy, France, and Poland, fish dishes still adorn the dinner tables of those who love tradition.

Quite apart from theological reasons of preparing spiritually for Christ’s coming with fasting and abstinence, the ancient custom makes psychological — and, dare I say, financial — sense, too. If you deny yourself treats most of December, you will enjoy them even more than usual on Christmas Day. And if you cut back on your personal expenditures for the first three weeks of Advent, you’ll have money saved for the fourth week, which is when over 60% of Americans do their Christmas shopping.

I was stunned this week to discover how much Americans, Canadians, and Britons spend on Christmas: the gifts, the new clothes, the parties, the lot. In 2019, the average American household spent $1,496 over Christmas. In Canada, it was estimated that a household’s Christmas bills would total $1,593.  In the United Kingdom, the government predicted that the average household would spend £1,116 (about $1481). And as I have no interest in re-establishing a Puritan anti-Christmas regime, I would applaud all this lavish Yuletide merry-making except for one thing.

That one thing is debt. One American study found that over 60% of people with credit card debt surveyed said they’d be willing to take on more debt to do their holiday shopping. A 2018 Canadian study showed that 60% of Canadians surveyed said they’d be willing to go into debt to buy Christmas presents. And in the U.K., well, the National Debt Advice organization has some scary stats:

National Debt Advice adds some comic relief to this tragedy by saying that if you overspend, at least you aren’t alone.

But debt isn’t very funny. The exorbitant interest on unpaid credit card bills doesn’t make me think about the Nativity: It makes me think of Our Lord scourging the Temple. You won’t find this in the catechism, but I’m certain our Lord is not pleased that usurers make so much money from His birthday.

At this point, some of my readers will object that the pressure to go into debt over Christmas is enormous because of their children’s expectations. I am not sure, though, that seeing their parents miserable or even frightened when the bills show up in January will be worth the material whatever-it-is the children thought they needed on Christmas Day.

I don’t have children, but I was a child, and the Christmas memories that stayed with me most vividly over the years are the ones that involve the family doing things together, particularly stringing popcorn and icing gingerbread decorations for the tree.

Our Christmas gift-giving ceremony involved everyone watching as everyone opened their gifts, one after the other, taking turns, paying attention, saying thank you, waiting a moment before opening the next one. Our best Christmas time activities involved going somewhere or other with one or both parents: tobogganing was a favourite.

The effect of presents on children can be strange. I have forgotten most of the presents I received for Christmas, but I do remember the weird, hollow feeling that began to come after the gift-giving was over, along with the long dull denouement between the excitement of the presents and the comfort of the feast.

The one time I remember not feeling this way as a teenager was after someone opened “Santa’s gift to the whole family”: a VCR. (We must have been the last family on the block to get one, and my mind was thoroughly blown.) But most years, despite the generosity of my parents, my grandparents, and my siblings, I heard a faint interior whisper, “But it wasn’t enough.”

Well, of course it wasn’t enough. Material things are never enough. Look at how fast the high of shopping wears off, never mind the Christmas presents. The great mistake, which I have learned to stop making, is to look for satisfaction in material things. Our greatest joys come from God and the people who love us. At the end of the (Christmas) day, it’s the gift-givers (and the Divine Giver), not the gifts, who matter most.