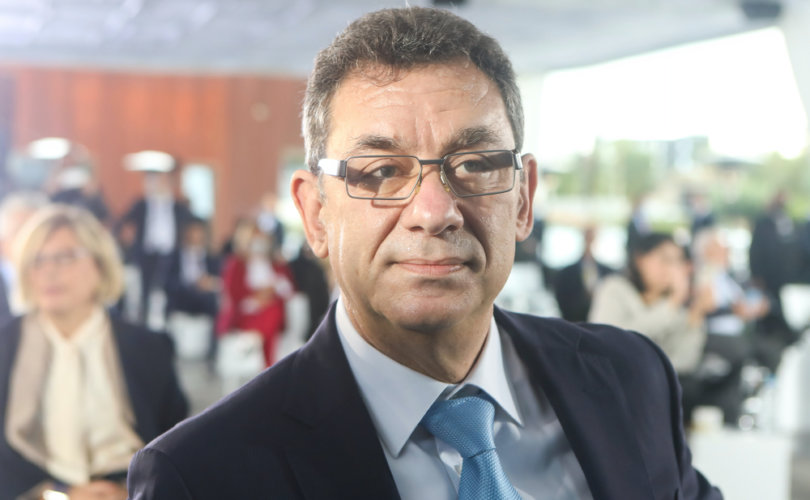 (LifeSiteNews) — Pfizer CEO Albert Bourla said he believes life will “return to normal” as his company develops a new version of its abortion-tainted and leaky COVID vaccine and sells its new treatment to countries.

He told French publication Le Figaro on Sunday that society could “resume a normal life” soon.

All it will require is that at least once a year you trudge off to the local pharmacy or hospital and get jabbed with the Pfizer vaccine.

Bourla said COVID will be “very difficult to eradicate” and could be around “for years,” according to Midi Libre. Lucky for you (if you own Pfizer stock), he’ll have a shot for you.

Conveniently, Pfizer is developing a jab that works against the Omicron variant.

And if I were a betting man, I’d guess Pfizer’s scientists are working on a 2023 Rho vaccine and a Sigma shot for 2024.

“It has spread all over the world, it can infect the same person several times, and it has mutated to the point of making us rediscover the Greek alphabet,” Bourla said.

“The question is not whether this virus will disappear or not … [it] is: are we going to be able to resume a normal life?”

Bourla said he believes you will … if you take his shots.

“We are well positioned to get there in the spring thanks to all the tools at our disposal: tests, very effective vaccines, and the first treatments that can be taken at home,” he said.

The “effective vaccines” must be taken at least once a year, according to Bourla’s past statements. Those “treatments” of course refer to Pfizer’s own preparations, not cheap and widely-tested options like ivermectin or hydroxychloroquine.

“The most likely scenario for me is that, because the virus is spread all over the world, that [we] will continue seeing new variants that are coming out,” Bourla predicted in September 2021.

One reason that the virus may continue to spread despite the availability of a vaccine for over a year now, is that the jabs are not effective at stopping transmission.

“Our vaccines are working exceptionally well. They continue to work well with Delta with regard to severe illness and death,” Centers for Disease Control and Prevention Director Walensky told CNN. “But what they can’t do anymore is prevent transmission.”

Trials on the COVID shots have never produced evidence that the vaccines stop infection or transmission. Success isn’t even measured by stopping transmission but by preventing severe symptoms of COVID-19 disease.

“Also, we will have vaccines that they will last at least a year, and I think the most likely scenario is annual vaccination, but we don’t know really, we need to wait and see the data,” Bourla told ABC News.

“Data” presumably refers to the profit margin and the willingness of governments to keep buying Pfizer shots.

— Article continues below Petition —
PETITION: BOYCOTT IKEA for Discriminatory Policies Towards Unvaccinated Workers!
Show Petition Text
36200 have signed the petition.
Let's get to 40000!
Thank you for signing this petition!
Add your signature:
Show Petition Text

Pfizer could bring in over $100 billion in revenue in 2022, analyst says

Pfizer has also developed a COVID treatment called Paxlovid, for which the United States federal government has agreed to pay billions of dollars, according to the Wall Street Journal.

The ongoing fear of COVID, which will include boosters in people as young as five years old, will likely financially benefit Bourla and his company, which could make over $100 billion in revenue in 2022, according to a financial analyst.

According to Markets Insider’s summary, analyst Geoffrey Porges predicted that “Pfizer’s top line will exceed $100 billion in 2022 compared to $82 billion this year, thanks to incremental revenue contributions from Comirnaty and Paxlovid.”

However, Paxlovid, Pfizer’s treatment for a disease which primarily kills elderly people and those with underlying conditions, has numerous restrictions.

It cannot be taken by people with kidney or liver problems. It also cannot be prescribed for people who are hospitalized with COVID and must be taken within three days of symptoms beginning.

The company primarily tested the drug on otherwise healthy people, with only 21% of individuals having a comorbidity.

Johns Hopkins University’s mortality analyses of COVID concluded that 98.5 percent of all individuals who contract COVID will survive. The number includes people of all age groups and medical conditions.