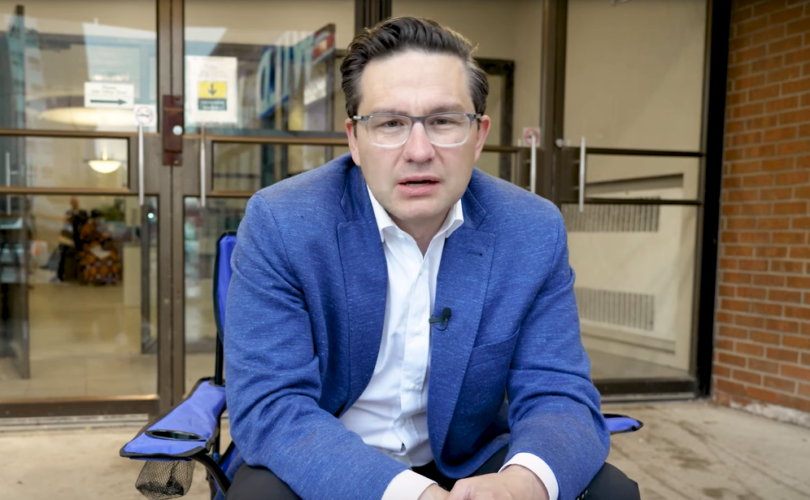 (LifeSiteNews) – It is official. Pierre Poilievre will lead the Conservative Party of Canada after winning the leadership race over the weekend.

And while he is not a social conservative when it comes to pro-life and pro-marriage issues, he has branded himself as pro-freedom and anti-Trudeau. In a perfect world, I would prefer a Christian King to lead this Commonwealth nation of ours – no, not King Charles the Lord of the Great Reset – but that is a pipe dream in Canada’s current political landscape.

However, given the combination of incompetence and malevolence that is Justin “Castro” Trudeau, I would be happy if a broom stick or a janitor’s mop became Prime Minister in Trudeau’s stead.

In any event, politics being the never-ending football game that it is, we don’t always get to pick who we play with, or even count on the referees calling the game fairly. Nonetheless, the game keeps going, and we either get destroyed or march down the field as best we can.

Whatever one may say about Poilievre’s shoddy track record on important faith and family issues – and he has left MUCH to be desired in that area – it is simply a fact that in the world of winnable electoral politics in Canada, the Conservatives are the only gig in town that allow people like you and me to be part of the conversation. I may not be in line with some of his thinking, but I am definitely not on Trudeau’s team and Poilievre, as they say, is it.

To use a cliché, I would say about Poilievre’s pro-freedom messaging that it has come better late than never. He was basically silent about the COVID regime until the Trucker Convoy, as were most conservatives, but since then he has championed the rights of Canadians to not live in an Orwellian monstrosity of a nation that used to be a nation of Canucks with constitutional rights.

Some will say that he only came out as a pro-freedom chap when it became “cool” to do so. And, while I understand that to a point, there are a couple of things to consider.

First, it was not clear while the convoy was going on that it was going to be a winnable issue for a politician, even a conservative one. Conservative media was generally friendly to the convoy as things continued, but in fairness to those who were skeptical, it was anybody’s guess what could have transpired.

Conservative media was generally pretty ghastly about freedom issues during the days of the COVID daze, and conservative political leaders were some of the most egregious offenders against pro-freedom citizens.

If Poilievre had waited till the dust had settled and came out in March or April in favour of freedom, I would be as skeptical of his motives as anyone. But from where I am standing, it seemed to me that like many Canadians, he had had enough of the nonsense and the convoy was like a breath of fresh air that puffed him up and gave him the courage to speak out.

I doubt it was a cool and collected political maneuver if we consider that the mainstream media was almost completely against the convoy. I think his gut told him to stand up straight and finally say what he believed.

This brings me to my next point. Poilievre suffered, like we all did, under the leadership of one of the most effete and feckless leaders in the history of the Conservative Party – Erin O’Toole.

Erin the Tool championed the vaccines as much as anyone, and thought it was fun for Canadians to have to take PCR tests to travel domestically on trains and planes. His government also ousted Christian pro-freedom politician Derek Sloan in a very shady way in early 2021.

It may well have been that Poilievre wanted to speak out long before the working-man’s chariot rolled into Ottawa, but it wasn’t only Sloan that was kicked out of a conservative Party.

In Ontario, Doug Ford got rid of Belinda Karahalios and Roman Baber after they spoke out against COVID tyranny. In addition, Jason Kenney in Alberta and Scott Moe in Saskatchewan were bipolar in their back and forth on freedom and tyranny. Simply put, coming out against the COVID regime was essentially political suicide due to the maniacs in charge. As much as I would like to beat my chest and say that Poilievre should have come out harder, if he was eying a chance to be in charge, it would have been hard to do that if he was treated like Sloan and the others.

I would also venture a speculation that there was a movement against O’Toole brewing in the Conservative caucus. It was almost immediate that a leadership review was underway, and a massive majority of the party kicked out their leader faster than he did Derek Sloan.

Politicians being what they are, it is not a surprise if they change their colours like a chameleon. Nonetheless, it is a push for freedom and sanity that got Poilievre elected as party leader, and brand is centred around “reclaiming” Canada and its values. Not exactly “make Canada great again” but not far off.

Reclaim what has always been yours.

Who knows. But his campaign has shown that with modern media equity due to social media and mobile devices, you can run a successful political campaign without having to go through the rigmarole of traditional radio and television.  His videos have garnered tens of millions of views, and he employed single camera shots and basic microphone technology.

All of this is to say that Pierre knows that the political game is changing in Canada, and Canadians conservatives have become very activated by the events of the last couple of years. He must know that he is one convoy away from being ousted as party leader.

I think he is a smart man, regardless of our differences of opinion on certain issues. If he is in fact smart, then he will follow through if he wants to keep his job.