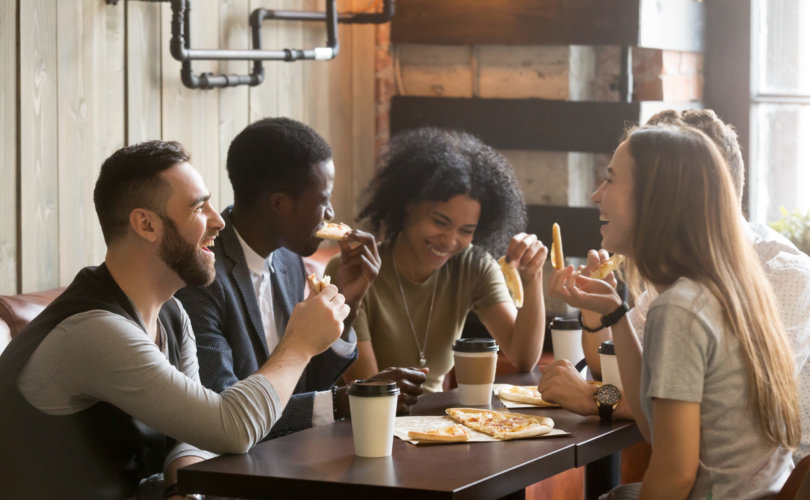 June 23, 2020 (LifeSiteNews) – My fellow Americans, we are being sold a bill of goods. Race is not what is dividing us. Rather, we are being divided by competing ideologies. Let us put our focus where it belongs.

Listening to the news, you would think that racism is deeply entrenched in every neighborhood in our country. That racial hatred is the norm. That judging people by the color of their skin is what the average American does.

But I do not believe that for a second – and I say that while fully acknowledging the very real racial issues we continue to face.

A caller to my radio show on Monday said he was born in Hong Kong. Then he lived in Ghana, in West Africa. Then in Ireland. And now in America.

He said that America was by far the least racist place he lived. (The call starts here.)

One week earlier, I had interviewed Professor Craig Keener, a dear friend and one of the world’s foremost New Testament scholars.

He is white but was ordained into the ministry in a black church in America, and he is married to an African woman and they have a son. Craig has also co-authored two books on race relations, together with a black co-author.

He is acutely aware of racial issues and does not downplay them for a minute.

But he said that his wife, a highly educated woman who speaks fluent French, suffered real discrimination while living in France. She would arrive for a job interview, for which she was well qualified. But when they met her, they would say, “We don’t hire blacks.”

She never experienced that here in America.

Not only so, but Craig told me that the worst racism she ever faced was within her home country in Africa, where the racism had nothing to do with skin color, since everyone was black. It had to do with where you came from or what strata of society you lived in.

That being said, I do not believe racism is the norm in America.

On June 11, I polled my Twitter followers, asking, “Would you be completely at home having a neighbor of a different race?”

Now remember, even though my Twitter followers (a little over 41,000, so not particularly large) are roughly equivalent to the national averages when it comes to demographics, they are quite conservative. The strong majority are probably Trump supporters as well.

How did they respond to the poll?

Just under 97 percent said “Absolutely.” (The exact number was 96.8 percent.) Yes, almost 97 percent said they would absolutely “be completely at home having a neighbor of a different race.”

Only 2 percent answered with “Depends on which race.” Only 1.2 percent said, “Absolutely not.”

And remember: this is an anonymous poll, so people can vote freely.

As for the results, they didn’t surprise me in the least, especially in Christian circles. (The vast majority of my social media followers identify as Christian.)

And just ask yourself about your own circle of friends or co-workers. How common is racism in your midst?

Getting back to the poll, I was inspired to do the “neighbor” poll by a 2013 article by Max Fisher in The Washington Post. It was titled “A fascinating map of the world’s most and least racially tolerant countries.”

Fisher reported the results of a major study by two Swedish economists who felt the number one way to determine racial attitudes was this: “The survey asked respondents in more than 80 different countries to identify kinds of people they would not want as neighbors.”

What were their findings?

“Anglo and Latin countries most tolerant. People in the survey were most likely to embrace a racially diverse neighbor in the United Kingdom and its Anglo former colonies (the United States, Canada, Australia and New Zealand) and in Latin America.”

Conversely, “India and Jordan by far the least tolerant. In only two of 81 surveyed countries, more than 40 percent of respondents said they would not want a neighbor of a different race. This included 43.5 percent of Indians and 51.4 percent of Jordanian.”

So, America is one of the least racist countries on the planet?

To repeat: This does not mean that we do not have problems to address. And, as I have stated before, to the chagrin of some of my conservative friends, I have no problem asking if there is still systemic racism in America. (If not systemic racism, then system inequity.)

My point in this article is to stress that our biggest issues in America are not race-based. They are ideologically based. And right now, those pushing a radical leftist agenda are the most divisive among us, by far.

Of course, if the radical right (which includes the “alt-right”) had a bigger platform today, they would be just as divisive. But they do not. They have been largely marginalized, and for that I am glad.

Instead, it is the radical left (which includes the BLM movement and its Marxist-fueled agenda) which has become dominant, championed by a complicit (or foolishly naïve) media. They are the ones dividing us.

On a personal level, I will continue to listen to people of color as they share perspectives with me (like a caller on Monday who told me he started picking cotton at the age of 5 and that I had no idea what his life experience was like; he is correct). And I will continue to ask God to show me my blind spots.

But I will not allow cultural radicals to paint a false picture of our nation.

We are far from perfect. But we are hardly a country that is deeply divided by race.

Let us join together then and stand as one for what is right.

I truly believe that is what the great majority of Americans want to do.