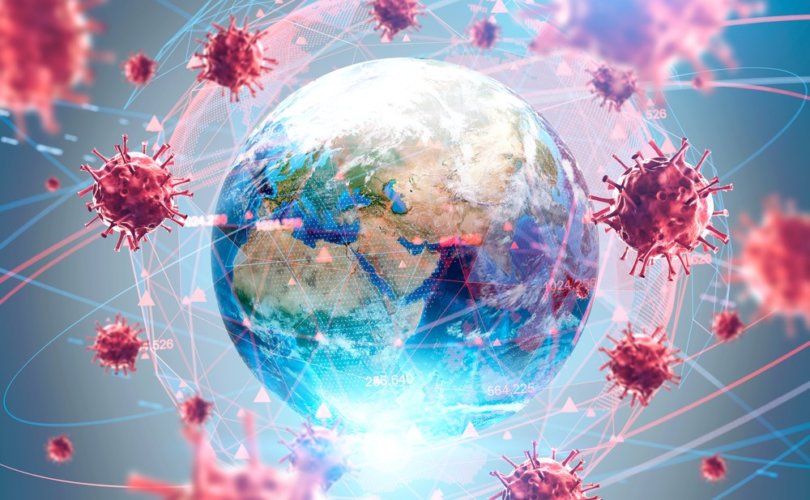 December 19, 2020 (LifeSiteNews) – No less a figure than Dr. Francis Boyle, an expert on biowarfare, believes that “the coronavirus that we’re dealing with here is an offensive biological warfare weapon.” Speaking of Wuhan’s Institute of Virology, which is at the epicenter of the epidemic, he added that there have “been previous reports of problems with that lab and things leaking out of it.”

For Dr. Boyle to be correct, the CCP would have to have both the “intention” and the “capability” to develop such a bioweapon. Does it?

It is no secret that the Chinese Communist regime,  despite being a signatory to the Biological Weapons Convention, regards the development of bioweapons as a key part of achieving military dominance. The vice-president of China’s Academy of Military Medical Sciences, He Fuchu (贺福初), said in 2015 that biomaterials were the new “strategic commanding heights” of warfare.

Reflect on that phrase – “specific ethnic genetic attacks” – for a minute.

What General Zhang is talking about, to be perfectly clear, is bioweapons that kill other races, but for which people who look like him have a natural or acquired immunity. Such a weapon would, if potent enough, decimate the populations of Europe, South Asia, and the Americas without firing a shot, leaving an open field for Chinese domination.

Those who might counter that one wild-eyed general does not necessarily speak for the Communist leadership should bear in mind that Zhang himself is part of that leadership. He was a full member of the 18th Central Committee (2012-17) and is the former president of the National Defense University.

Does COVID-19 cause more serious infections among non-Chinese races? It’s hard to say, since almost all the information coming out of China is fabricated for political purposes, but we can’t rule out the possibility. It is at least curious that, while it’s party time in Wuhan, many U.S. states and European countries are locking down again.

So as far as intentions are concerned, I think the evidence is indisputable that the PRC would develop offensive biological warfare weapons targeted at other races if they could. But can they? What do we know about China’s genetic engineering capabilities?

We know that China has mastered CRISPR technology, which enables the kind of gene splicing that is needed to create a biological superweapon. After all, it was a Chinese scientist, He Jiankui, who announced that he had reengineered the human genome to make it resistant to HIV, a feat for which he recently received a three year prison sentence.

If you are intent upon genetically engineering offensive biological warfare weapons you also need a very secure facility to ensure that they do not escape from containment. After all, you are taking dangerous pathogens like SARS, Ebola, and various strains of coronavirus and trying to make them even more deadly. China only has one such Level 4 microbiology lab, the Wuhan Institute of Virology, and it is located in – you guessed it – the city of Wuhan.

Finally, in addition to the technology and the facilities, you need raw biomaterial. This means laying your hands on the most deadly viruses to be found in nature, into which you can engineer characteristics that make it even more deadly. Some ways of doing this include enhancing human-to-human transmission of a virus originally harvested from another species, or increasing the latency period before someone is infected begins to show symptoms.

Here we have incontrovertible evidence that the Wuhan lab has acquired some of the most deadly coronaviruses on the planet. It’s worth noting that just last year, two Chinese nationals, husband and wife team Dr. Keding Cheng and Dr. Xiangguo Qiu, were removed from the National Microbiology Lab in Winnipeg by the Royal Canadian Mounted Police as part of an intellectual property theft investigation. The lab is Canada’s only Level 4 microbiology lab, which is to say, it’s the same type of lab the Chinese operate in Wuhan. Dr. Qiu is known for working on the Ebola virus, while her husband has published studies of SARS. The RCMP investigation noted that both made frequent trips back to the Wuhan lab.

The bottom line is that China has everything it needs to create a deadly bioweapon: the technology, the facility, and the raw biomaterial.

Much ink has been spilled by the Washington Post and other mainstream media outlets to try and convince us that the deadly coronavirus is a product of nature rather than nefariousness, and that anyone who says otherwise is an unhinged conspiracy theorist. Dr. Li-meng Yan has published a series of papers proving to the satisfaction of objective observers that the novel coronavirus was not only manmade but was intended to be used as a bioweapon.

She has been predictably attacked by the virology establishment, eager to protect its reputation. They argue that a true bioweapon would be far more lethal. But this proves nothing. The fact that a bioweapon under development does not work as well as intended is not proof that it is not a bioweapon, merely that it is not yet ready to deploy. And, bioweapon-in-the-making or not, there seems little doubt that the coronavirus was released from the Wuhan Institute of Virology.

Propinquity suggests causation. After all, if the first coronavirus infection were a simple result of accidental animal-to-human transmission as claimed, this could have occurred anywhere in China. How curious that the epicenter of the epidemic just happens to be in a city of 11 million people where China’s only Level 4 lab is located. Chance? I think not.

Another reason to think that what the world is dealing with a bioweapon is the reaction of the Communist authorities. Beijing has gone to truly extraordinary lengths to cover up the source of the pandemic, the Wuhan lab. They first pointed to the snakes and bats supposedly being sold at the Wuhan Seafood Market, and shut the market down. But it soon came out that snakes do not carry any coronaviruses and that bats – which do – were not sold at a seafood market.

There is one final piece of evidence that for me, as a China hand, supports the theory that the coronavirus is a Chinese bioweapon that was deliberately released upon the world. There is a rumor going around on the Chinese internet that the United States has deliberately unleashed an American bioweapon on the Chinese population. Tellingly, such absurd claims are not being censored by the authorities, while accurate reporting on the epidemic is. It is very much in character for the Communist Party leaders to blame their chief geopolitical rival for crimes that they themselves commit.

With their endless lies and evasions, Party leaders trying to hide their criminal complicity in the epidemic’s origins. For me as a China watcher, even taking into account the Party’s penchant for secrecy, the multiple levels of deception engaged in by Communist officials over the past year have been extraordinary.

We may never know for certain whether the bioweapon known as COVID-19 was deliberately released upon the world. But we do know that the major Western print, broadcast, and social media are all doing their best to dismiss the very possibility as a paranoid fantasy.

But – as the old joke goes – it’s not paranoia if they are really out to get you. And on this point the evidence is clear. We know, because PLA generals have told us so, that their researchers are racing to develop lethal bioweapons as fast as their theft of Western technology and stolen virus samples will allow. We also know, because these same generals have told us, that the goal is to develop bioweapons targeting specific races. There is simply no question that Communist leaders have used the pandemic that they have inflicted upon the world as part and parcel of their strategy for China to replace the USA as the dominant power on the planet.

Did they deliberately release it first on their own people? What better way to spread the Chinese Virus all around the globe than to use the Chinese people themselves as unwitting disease vectors?

I suspect that the only real surprise for the Chinese leadership in the novel coronavirus plague is that China itself has become ground zero for the pandemic that they had hoped to one day unleash on other countries.

At the same time that America and the rest of the world are dealing with the aftermath of the China Virus pandemic, we must be alert to the very real possibility of a future release of an even deadlier pathogen.

Does anyone think that the Communist authorities – once they had perfected a bioweapon to which they themselves had a natural or induced immunity – would hesitate to unleash a deadly pandemic on the West to achieve their “China Dream” of world domination? Those who doubt that the leaders of the Communist Party would use such an “assassin’s mace” need to tell us precisely what moral or ethical considerations would stay their hand. Because I can think of none.

Steven W. Mosher is the President of the Population Research Institute and the author of Bully of Asia: Why China’s Dream is the New Threat to World Order. A former National Science Foundation fellow, he studied human biology at Stanford University under famed geneticist Luigi Cavalli-Sforza. He holds advanced degrees in Biological Oceanography, East Asian Studies, and Cultural Anthropology. One of America's leading China watchers, he was selected in 1979 by the National Science Foundation to be the first American social scientist to do field research in China.