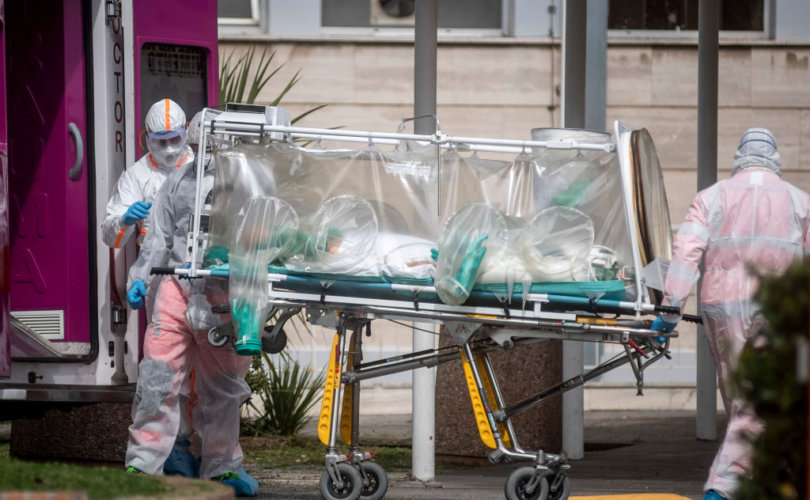 Medical staff collect a patient from an ambulance at the second Covid-19 hospital in the Columbus unit on March 17, 2020, in Rome, Italy. Antonio Masiello/Getty Images

March 18, 2020 (LifeSiteNews) – Different Catholic commentators from Italy have shown grave concern about the coronavirus and its rapid spreading and are supporting measures that are restricting the virus. In the midst of conflicting debates as to whether this illness is just a little bit worse than the normal flu, they see that it is dangerous and that we need to contain it. As we all struggle to understand this new disease and how to respond to it, LifeSite reached out to several well-informed Catholics who are already living under the conditions of lockout and closed churches.

LifeSite is presenting now the views of those Catholics who have been outspoken in this discussion, among them Professor Roberto de Mattei, as well as a Rome-based journalist, Professor Armin Schwibach, and Hilary White, a traditional Catholic journalist living in Italy.

Professor Roberto de Mattei, a church historian and the President of the Lepanto Foundation, has told LifeSite that he supports “restrictive health measures.”

“Faced with the Coronavirus epidemic,” he states, “I believe that the Italian line, which aims to protect people's health, is fairer than that of some countries.”

“I am therefore in favor of restrictive health measures,” the church historian goes on to say. He also reminds us that in Italy “it is forbidden to leave houses, unless you have to go to work, to a pharmacy or to a supermarket.”

But Professor de Mattei at the same time reminds us of the importance of our spiritual life. He regrets that the Masses are currently abolished in Italy, saying that “in my opinion, it would be possible to authorize them with due precautions. We are receiving extra Missam communion every day from a zealous priest.”

“Communion in the mouth cannot carry the virus if the priest disinfects his hands every time he distributes it,” Professor de Mattei explains.

He also stresses that “we must certainly do everything to preserve our lives but we must also ensure the spiritual goods that we need in order to persevere in the difficult days ahead.”

Practically, the spiritual means are: “the daily holy Rosary and Holy Communion as frequently as possible, even extra Missam. But above all we must love the justice of God, because without justice there can be no mercy and God is infinitely merciful because He is infinitely right.”

De Mattei also puts this current crisis in the context of the messages of  Our Lady of Fatima, saying that this is the moment “to remember the message of Fatima, because the divine punishments, which have already been affecting the Church for many years, are making themselves visible to the whole society.”

“It is time to multiply the calls for conversion and repentance and to nourish the supernatural spirit of those close to us,” the Catholic historian goes on to say. “We must certainly insist on asking for consecration to Russia. Pope Francis, or another Pope will make this consecration, but I fear it will be too late, as Our Lady predicted in Fatima.”

With reassuring words, Professor de Mattei concludes his comments to LifeSite, saying that everything that happens “is for the salvation of the elected and for the triumph of the Church,”  adding that “the closer the punishment is, the closer will be the triumph of the Immaculate Heart of Mary that Our Lady has promised us.”

Other Catholics in Italy, such as Professor Armin Schwibach – the Rome Correspondent for the Austrian Catholic website Kath.net and a professor of philosophy – responds to the claim of many that the Coronavirus is not much worse than the usual flu. He responds: “Europe is broken, Italy, Spain, Germany. Is that not enough? The current damage in Italy is currently 650 billion euros.” Everything that existed 20 years ago, he continues, “no longer exists.” The “entire social structures have broken apart,” and the “life of the Church is totally broken.”

Schwibach recounts that “it’s not even certain how the supply will be regulated.”

“I would advise everyone to take the matter seriously,” Schwibach tells LifeSite, and encourages everyone to “take a look at the films from the Italian intensive care units. The videos of the desperate doctors. The videos of the empty cities.” He adds that it is “not foreseeable how things will continue in the financial world.”

Professor Schwibach – who has repeatedly interviewed Cardinal Walter Brandmüller on matters of the Church – describes how “achievements of the last 50 years have been wiped away,” borders closed, and how “politicians first deny and then panic.” The European community, he adds, is gone.

‘The situation in Italy is extremely grave’

Hilary White, a former reporter of LifeSite and a resident of Perugia, Italy, has the following to tell us, while fully admitting that she is “nothing like an expert” but has simply read much on the topic:

“The situation in Italy is extremely grave. The virus is incredibly transmissible; virologists have said it has between 100 and 1000 times the ability to bond with human cells than even our very worst viral epidemics like Spanish flu. This information is available online, but is mostly only being distributed by concerned people on social media. The MSM is either ignoring or suppressing it. Corona19 does not have the kill rate overall that SARS or other viruses do, but the two factors – extreme transmissibility and the fact that the person carrying the virus will not experience any warning symptoms for up to three weeks – is making it spread faster than anything we've seen in Europe in modern times. It's going faster than any of the great plagues of the past except the Black Death. This means that even with the comparatively lower death rate, the number of deaths overall will likely be much greater than other recent viral epidemics. Sheer volume will outpace the others, and is already.”

White also provides us with some recommendations for further study. For her, “closing the churches is perfectly sensible,” due to the high transmissibility of the virus.

LifeSite asked White about some practical recommendations. We reproduce them here for our readers' benefit:

“Practical things. In our village –  as in most of the rest of Italy – the supermarkets and pharmacies are open. Each family is asked to designate one person to do the shopping and the rest must stay at home. When you leave the property, you must carry a 'self-declaration' – a form that you fill out stating your address and where you are going and the reason for the necessity. (This came into effect since the last time I went to the village so I don't know if it is being enforced.) At the village supermarket, they are open all day so as to avoid creating crowds and queues. They are allowing one person at a time into the shop.”

She continues with her practical measures:

“When I went out last time to bring home supplies, I wore gloves. When I left the shop I removed them (according to surgical nursing protocols, that is, without touching the outside part) and discarded them immediately. I used alcohol-based sanitizer and gloves to use the water fountain and washed the bottles and discarded the 2nd pair of gloves. When I got my things home, I left everything on the terrace and, again wearing gloves, took out every item (each apple, each orange, each potato etc) including the bottles and cans, and soaked them in a solution of 1 gallon (about 3L) of water + 2 tsps of bleach and dish liquid for 2 or 3 minutes. Then transferred the sterilized items to a water bath. Then chopped, bagged and froze in the freezer chest.

This is the normal procedure of many people who live in developing countries where water and food supplies can't be guaranteed to be sterile or safe. It's standard for medical volunteers in places where viral outbreaks occur – like Ebola in Africa.

Vinegar does nothing to stop the virus. Use bleach in a solution of water. Soap – ordinary hand soap – is also very effective. Wash your hands any time you have contact not only with a person but with any object a person might have touched outside the home.

Everyone around here is keeping a minimum distance of 1 meter. But researchers have discovered that in a closed environment the virus can be transmitted up to 5 meters away.”

These are voices from Italy. Their situation might be worse than any future situation in this country – due to the high mortality rate they are experiencing. But the transmissibility and even a lower mortality rate will still do much damage to many lives in our country.

Therefore, it may be better to prepare – both physically and spiritually – for some difficult times.

May Pope Francis do the Consecration of Russia to the Immaculate Heart of Mary now.