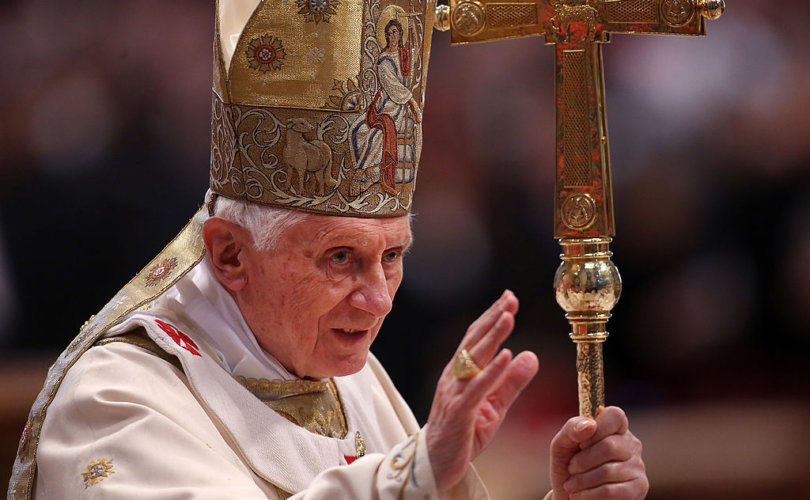 Pope Benedict XVI waves to the faithful as he arrives at the St. Peter's Basilica for a mass with newly appointed cardinals on November 25, 2012 in Vatican City, Vatican. Franco Origlia/Getty Images

(LifeSiteNews) — On the eve of Pope Benedict XVI’s burial, Piero Laporta, a retired Italian brigadier general, published a stunning piece on his own blog.

This Catholic author, who previously lobbied to have Benedict participate (and influence) the controversial Synod on the Family some eight years ago, is now revealing that in the first weeks after the election of Joseph Ratzinger to the papal throne in 2005, an official of the U.S. National Security Agency (NSA) “was bragging about the resignation to which H.H. Benedict XVI of revered memory would soon be forced.”

If this story is true, however, “soon” would have to mean almost eight years, as that is the time it actually took for Benedict to resign.

Laporta is a retired brigadier general who worked for the Joint Chiefs of Staff of the Italian Military, and since his retirement writes for multiple blogs and for different newspapers, collaborating with, among others, our colleague Marco Tosatti and his blog Stilum Curiae.

Laporta’s January 3 blog entry starts with the comment that he “shudders” at the publicly displayed “crocodile tears” by a representative of the community of San Egidio, in regards to Pope Benedict’s death.

In light of these tears, “memories pass before my eyes,” he added.

Laporta then revealed that there exists “a great Roman circle that is still active today,” that is more powerful than the so-called “Sankt Gallen group,” which has been historically opposed to Benedict.

Laporta further relayed that in 2005, “a leading delegate of the U.S. government, who had his hands in Italian finances (where he is still active) and in Italian politics,” and was “a figure in the highest ranks of the National Security Agency (NSA),” was “bragging about the resignation to which H.H. Benedict XVI of revered memory would soon be forced.”

This man, Laporta went on to say, spoke “with a nonchalance and with an arrogance” outside of his own circle about this matter.

This “Roman circle” was reportedly dedicated to the slogans “God is dead” and “Jesus is fake news,” and was in “panic” when Benedict was elected.

The “Sankt Gallen Mafia,” Laporta added, was “no joke,” but is a mere fig leaf compared to this “Roman circle” that Laporta refers to as a “dome of demons.”

According to the Italian general, it was this group who “isolated” Benedict, “leaving him alone while the nescionalsecuiritiagensi [NSA] goons scourged the truth, then crucified it.”

It is not known whether this man, who at the time reportedly worked for the U.S. government, actually played a role in the resignation of Pope Benedict XVI. However, for the sake of discussing the fullest narrative of this historic resignation, it might be helpful to report on Laporta’s observations, making it a possible piece of the puzzle.

Another piece of this puzzle could be the fact that at the time of Benedict’s resignation in February of 2013, the Vatican Bank was unable to function, since it had been suddenly excluded from the SWIFT system and was thus incapable of performing necessary international transactions.

As Giuseppe Nardi of Katholisches.info reminds his readers today in his report on Laporta, Maurzio Blondet had discussed this matter in Italian, in 2015.

In light of Laporta’s blog post, Blondet, a Catholic journalist, quoted Laporta and said that it was wise that Laporta did “not disclose” the U.S. official’s name. He then re-posted his 2015 report titled “Ratzinger could neither buy nor sell,” which outlined the Vatican’s 2013 financial problems with the SWIFT system, thereby implying that he himself sees a link between Laporta’s report and this financial aspect of the history of Benedict’s resignation.

A third puzzle of the piece – which refers to the above-mentioned Sank Gallen Group – is that there might have been a conversation between Cardinal Carlo Martini and Benedict in 2012, in which the head of the Sankt Gallen group suggested to Benedict that it was time for him to resign. This story has been amply discussed by author Julia Meloni, which LifeSiteNews covered here.

Perhaps only future historians will be able to put together a fuller picture as to why a pope would resign, thus leaving the Church in the hands of modernists who are out to undermine the core of the Catholic Church’s doctrine and morals.

LifeSiteNews has reached out to Laporta to obtain further details, particularly as to why the NSA official would say that they would “soon” force him to resign, considering the alleged discussion took a place a full seven years before Benedict’s actual resignation.

This report will be updated if LifeSiteNews receives a reply.