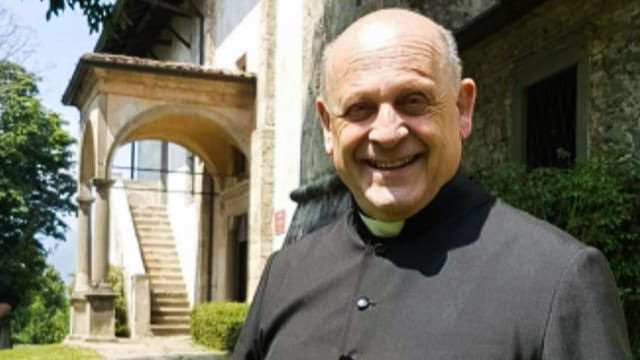 March 24, 2020, 12:00 PM EST correction: The story widely reported in Italy of a priest giving up his ventilator for a younger coronavirus patient is only partially true. Crux Now reported today that the priest declined the ventilator because he simply could not tolerate using it due to preexisting health conditions. We have amended our report to reflect this.

March 24, 2020 (LifeSiteNews) – Father Giuseppe Berardelli, pastor of the parish of San Giovanni Battista in Casnigo in Bergamo, died overnight between March 15 and 16 in the hospital of Lovere, Italy. Italian media had widely reported that he died after he had given up his own ventilator for a younger coronavirus patient.

The beloved priest who was known for his jovial character, was 72 and had been known for his many good deeds, such as the renovation of a Saint Don Bosco Oratory in his town. As a media report says about him: “Everyone remembers his smile and dynamism.”

According to the local media outlet Araberara, a long-time employee of the San Giuseppe retirement home of Casnigo relates how the parish community had bought a ventilator for their priest who had fallen ill with the coronavirus. Father Berardelli “gave it up of his own will to someone younger than he,” the unnamed employee relates, and this “even though he needed it.”

“This is perhaps the best picture of the soul of a priest,” this employee concludes.

A longtime friend of the priest, Giuseppe Foresti, told Crux Now, however, that Father Berardelli declined the ventilator for medical reasons.

“The story about the respirator isn’t true,” he said, adding that it was “half-fake news.”

“The problem is that when he got to the hospital, they tried to put the respirator on him, but he refused (to take it) because he couldn’t handle it,” he said. Foresti said that his priest friend was already in poor health when he arrived to the hospital.

Berardelli had been in Casnigo since 2006 and he had devoted much time and energy in the renovation of the local Saint Don Bosco Oratory. He also was devoted to Our Lady and her special shrine in Casnigo, which is called Sanctuary of Madonna d’Erbia. In this shrine, there is a painting of Our Lady holding Baby Jesus which is said to have once been miraculously restored over night, after an angry farmer had slashed it.

Father Berardelli was described by Giuseppe Imberti, the former mayor of Casigno, as a “pastor loved by all.”

This priest is not the only Italian priest who has died of the coronavirus. According to a CNA report, at least 60 priests so far have died this month after contracting the coronavirus. CNA quotes the Italian bishops’ conference's own newspaper Avvenire as saying that 51 diocesan priests, as well as nine priests of religious communities have so far died.

One local media report states that Father Berardelli “died on the field.” He is praised for his “smile that hid worries,” and for his “simple and outspoken way of great kindness and availability to everyone, believers and non-believers alike.” He was “loved by everyone,” the report continues, and he was still visited by parishioners of his former parish in Fiorano. He is also described as a “Marian priest.”

“I can tell you that certainly Don Giuseppe was a special person, he really gave himself to the entire community,” he said.