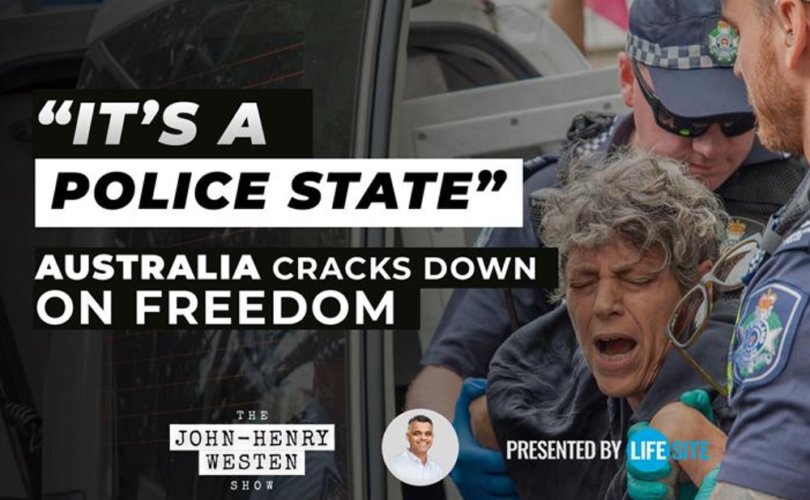 September 22, 2020 (LifeSiteNews) – It’s truly shocking to see what’s going on in Australia lately. Earlier this month, police in Victoria entered the home of a pregnant woman and arrested her right in front of her kids because she committed the grave “crime” of promoting on Facebook an anti-lockdown event.

Not long after that, a 27-year-old man — also living in Victoria — was arrested for spreading information about anti-lockdown events as well. And that’s just the tip of the iceberg!

On my podcast today, Dr. Bella d’Abrera, the Director of Foundations of Western Civilization Program at the Institute of Public Affairs in Melbourne, told me that the crushing, anti-freedom measures taken by the Victorian government during COVID-19 are reminiscent of 1960s Berlin, and that they are likely being implemented as a sort of test case to see how to control the population.

“I can't believe the police state that I've woken up in…I feel like I've woken up in 1961 on the wrong side of Berlin,” she said. “The premier, who is a socialist and a liar and corrupt, is…using communist language…[He’s] channeling 1960s Berlin.”

“I do feel like Melbourne has been a test run and a test case to see how you can control population and how you can manipulate population.”

Dr. d’Abrera was not alone in calling out the Victorian government’s authoritarian behavior. Mr. John Macaulay, a businessman who also joined us during the podcast today, echoed her sentiments.

John told me he was on a simple walk around town the other day just like he does every evening but was stopped by police who demanded to know what he was doing and who he was.

“The moment the police can stop, question, and detain people who are otherwise law-abiding citizens is very much proof-positive that the state of Victoria here in the south of Australia is a police state. It's not becoming one. It is already a police state,” he said.

These aren’t the only examples of the Victorian government taking extreme measures during the coronavirus. There is also a limit on how far you can travel from your home. And government officials have been seen surveilling priests who say private masses.

Shockingly, Dr. d’Abrera said, many Australians think this is all smart and sound policy that is helping limit the spread of COVID-19. She said that she’s deeply troubled by it all, especially by the suicides and jobs lost.

“We really have to hope that Christ is going to intervene at some point…because that's the only thing that can get you through this…when it does get back to normal, we [need to] make sure this doesn't happen again.”

John agreed. He told me that the recovery process is, in reality, an intergenerational project that will “take generations across the entire economy to rehabilitate the destruction that has befallen us.”