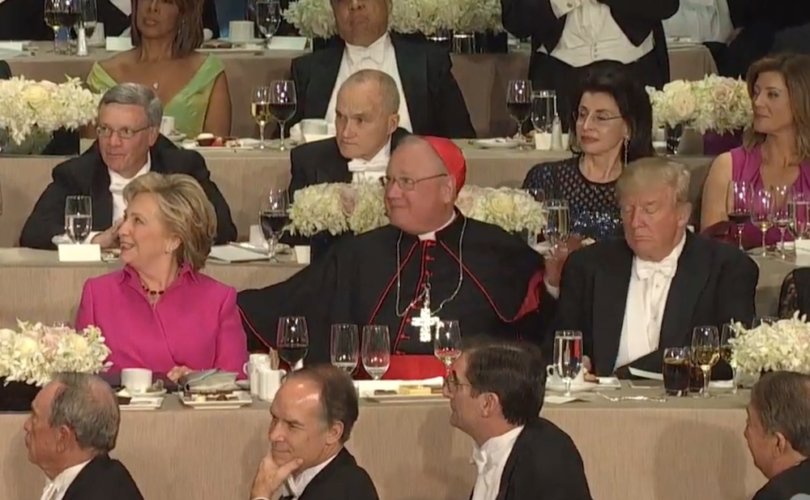 If this wasn’t clear enough already, this year’s display should make it obvious.

The dinner has been a travesty for years now. The event inevitably ends up promoting Democrat candidates who advocate the genocide of abortion, and now same-sex “marriage” and attacks on Christian freedoms. That’s because it suggests equivalence between the two candidates, when the fact is that despite any prudential disagreement the bishops may have with the Republican candidate, the Republican Party is in fact the only party that the Church can work with on the moral issues that she herself deems “non-negotiable.”

So far, the Archdiocese has been unmoved by this basic moral argument against the Dinner. But maybe this year’s display of partisan politics and acrimony will convince them.

Catholics and pro-life leaders have insisted for years that the needs of disadvantaged children can be served without giving a platform to abortion supporters in the weeks before an election, a fact that seems to fall on deaf ears, but this year the problem was compounded by the Archdiocese playing host to something cringe-worthy, beyond scandalous pro-abort photo-ops.

In particular, one of the arguments of the day is over which of the two major party presidential candidates is more detestable.

Certainly, Hillary Clinton’s rabid support for abortion and same-sex “marriage” are utterly beyond the pale, beyond her rank corruption and the now-revealed anti-Catholicism at the highest levels of her campaign.

But, arguably, Donald Trump himself has no business being given a Catholic platform of this magnitude either. The Church should not be hosting a man who would out-and-out dismiss his heinous talk about women as “locker room banter,” or someone who would deny a sexual assault allegation by demeaning the woman’s physical appearance. Specifically, he said: “She would not be my first choice.”

This presidential campaign has been ugly and incendiary, and Cardinal Dolan has dragged the Church into it. For all his talk of promoting engagement, dialogue, and amity, the candidates’ appearance at the dinner hardly exemplified any of those, even as it did benefit Catholic Charities.

Twenty-four hours after vehemently reaffirming her acceptance and advocacy of late-term abortion and homosexual “marriage” in the final presidential debate, Hillary Clinton stood before the Catholic crowd, avoiding acknowledgement of her high-level campaign staffers’ expressions of anti-Catholic bigotry, and invoked Pope Francis to counter Trump and make her case for “equality” and acceptance of manmade climate change.

Curiously, for all his faults and outward lack of piety, between the two, only Trump mentioned God and faith.

With all eyes on the dinner last week, the masses tuning in to see the next installment in the height of human ugliness in a political campaign, Catholic Charities of the Archdiocese of New York raised a record $6 million. But at what cost?