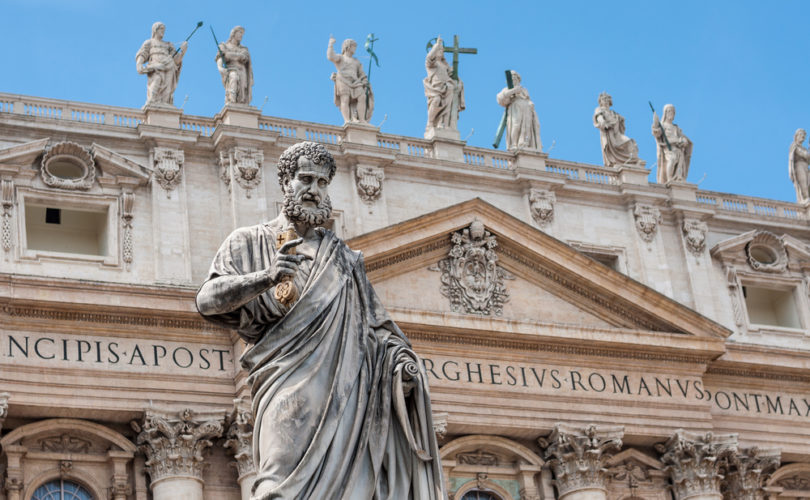 October 22, 2018 (LifeSiteNews) – The canonization of Pope Paul VI raises the question of how the Papacy is viewed. The elevation to the Altars of the Church of Pope John XXIII, Pope Paul VI, and Pope John Paul II, seems a surprising legacy of the Second Vatican Council. The Pope’s triple crown has been locked up in a museum; his Noble Guard has been disbanded; the harmless fun of ostrich-feather fans at Papal Masses has ceased; and the Gestatoria has been retired. But something has come in instead: a process of canonization which increasingly seems to be the norm and not the exception for a deceased Pontiff.

Many theological conservatives hoped that the canonization of Pope John Paul II would canonize, so to speak, his writings as Pope. It would surely be harder, they said, to ignore his fearless condemnation of abortion, contraception, and divorce, once his heroic sanctity was officially recognized. However, this has not come to pass. Pope Francis, who canonized him, seems to have made the keynote of his pontificate the minimization of John Paul II’s teaching in Familaris Consortio (1981) 84 that divorced Catholics in illicit second unions must not receive Holy Communion. It would be foolish to expect the canonization of Pope Paul VI to offer any extra protection or prestige for his condemnation of contraception in Humanae Vitae (1968), or indeed to the doctrinal orthodoxy defended with such vehemence in his Credo of the People of God (1968) and Mysterium Fidei (1965). The teaching of the Church, which Pope Paul reasserted in Evangelium Nuntiandi (1974) 5, that the preaching of the Gospel to unbelievers is of vital importance for their salvation, has long been unsayable.

The mass-canonizations of the Popes of and after the Council is not part of a movement to preserve and propagate what they taught from the Papal throne. On the contrary, canonizations emphasize a saint’s personal qualities, and in these cases it seems almost a counter-weight to or distraction from the institution of the Papacy itself. The contrast was well illustrated by Fr Bryan Houghton in his novel Mitre and Crook (1979) pp34-5. The speaker is the fictional bishop, Edmund Forester.

We are not talking about the Pope as a person but about the divine institution of the Papacy. It is abundantly clear that loyalty to the divine institution is quite distinct from loyalty to its temporary incumbent. Indeed, the two can run clear contrary to each other as history illustrates on almost every page from St Paul onwards. My favorite example is the Blessed Columba of Rieti. …

Columba was a Dominican nun who lived in Perugia. She suffered from almost every type of mystical phenomenon—ecstasy, inedia, levitation and the rest. The Master of the Dominicans felt uncertain whether her spirit was from God or from the Devil. This was about 1490, when people still believed in both. In consequence he would have the girl examined by the Holy Father himself who was on a visit to his favorite son, Cesare [Borgia]. This was duly arranged. In the great hall at Perugia, which you have doubtless visited, there sat enthroned the Sovereign Pontiff, Alexander VI, with Cesare on his right, Lucrezia on his left and the Papal Court around. Columba was introduced. Upon sight of the Vicar of Christ she immediately went into ecstasy, as should all good nuns. I seem to remember that she levitated and railed at the Pope from somewhere near the ceiling. “You who are the Vicar of Christ and act as the vicar of Satan! You who hold the Keys of the Kingdom but only unlock the doors of brothels! You who are captain of the Ark of Salvation and have a girl in every port! You who…” After twenty minutes of this sort of stuff, the Papal Court felt rather anxious for poor Columba’s safety. How do you get girls out of ecstasy? However, Alexander Borgia turned to the Master of the Dominicans: “Have no fear, my son; her spirit is certainly from God since everything she says is true.”

…the point is perfectly clear: Columba was in opposition to the person of the Pope precisely out of loyalty to the institution of the Papacy.

What I find astonishing in our days is that the situation is exactly reversed. People can attack the Papacy to their heart’s content provided that they do not breathe a word against the Pope.

Bishop Forester speaks in a somewhat jocular way, but the story of Bl Columba of Rieta is, in essentials, historically true.

Today Houghton’s words have come home to haunt us. It would seem today that for many it is admiration for the personal qualities of the current Pope, whoever he may be, which defines a Catholic, and not adherence to the Faith, which is the Papacy’s charism to preserve without addition or subtraction.