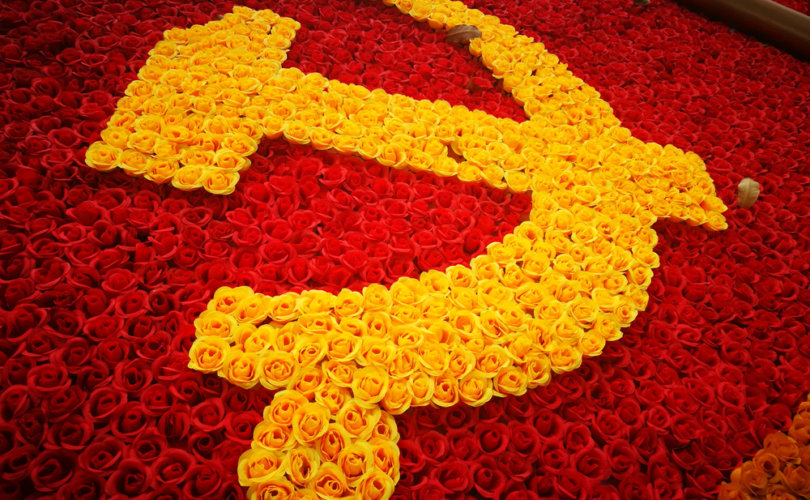 December 10, 2020 (LifeSiteNews) — Last night I went on Laura Ingraham’s show to talk about the Chinese spy who helped her lover get elected to Congress. It’s a spy story right out of the pages of Red Sparrow, the novel, later made into a movie, about Soviet-era sexpionage.

The operative in question went by the name of Fang Fang which — fittingly, given her occupation — translates into “Fragrant” Fang. Axios reported that Fragrant was sent by the Chinese Ministry of State Security to America in 2011 in order to cozy up to Democrat politicians in Northern California.

One of her most important “conquests” was then-Dublin City Council member Eric Swalwell. She promoted his political career, bundling cash for him during his successful 2012 campaign for Congress. She remained in close contact with Congressman Swalwell even after he became a member of the highly sensitive House intelligence Committee in January 2015.

As tempting as it is to focus on the story of how “Fragrant” Fang got her hooks into Eric Swalwell, the big picture is far more important. The use of “honey pots” — women who were sent into the enemy camp to seduce and compromise its leaders — has a long history in China and is still in use today. “Fragrant” Fang is only the latest in a long line of attractive young women who have been sent to America to compromise American politicians, gather intelligence, and influence policy.

John Ratcliffe, the director of national intelligence, warned in a December 3rd op-ed in The Wall Street Journal that Beijing was attempting to “dominate the world.” He highlighted how Chinese spies pose a much bigger threat to the U.S. than any other country not only because of the sheer scale of the effort that the Chinese Communist Party is making, but also because of its scope. Chinese spies, using sex, drugs, and money as bait, not only carry out military and commercial espionage, they also compromise U.S. lawmakers for the purpose of reshaping U.S. foreign policy to favor Beijing.

He expanded on his concerns in an interview with Catherine Herridge this past Sunday, stating that China was using blackmail, bribery, and covert influence to target members of Congress. The goal is to make sure that “only laws that are favorable to China are passed.”

Secretary of State Mike Pompeo addressed another aspect of Chinese spying in the U.S. on Wednesday, warning that China was aggressively attempting to influence state and local governments in various ways, including by offering all-expense-paid trips to China and seemingly innocuous sister-city agreements.

The scale of China’s influence operations inside the U.S. dwarfs anything that the Russians, or any foreign power, has ever attempted. There are literally thousands of U.S. officials at various levels of government — federal, state, and local — who have been approached by Chinese intelligence operatives and offered inducements of various kinds to become a “friend of China.” The PRC carefully tracks their response.

For example, here are lists of “friendly” and “tough” governors that were published in a report by the Chinese-run “D.C. Think” group in 2019. There are 17 “friendlies” listed versus only 6 “toughs,” which gives you some idea of just how successful Beijing has been in winning friends and influencing people. Given the way the CCP operates, these efforts always involve something of value changing hands.

Occasionally, in an unguarded moment, a Chinese official will be open about just how much leverage they have been able to acquire throughout successive presidential administrations.

For example, Di Dongsheng, a professor and associate dean of the School of International Studies at Renmin University in Beijing, recently suggested in a Nov. 28 speech that China “has people at the top of America's core inner circle of power and influence,” and that “China had influenced American policies for decades through a covert network of ‘old friends’ who had penetrated the highest levels of the U.S. government and financial institutions before the Trump administration.” He went on to say that the Chinese Communist Party had helped Hunter Biden obtain Chinese business deals.

I listened to Prof. Di’s lecture in Chinese. He was bragging about China’s ability to corrupt and control American politicians like Joe Biden and their families — and the audience was laughing uproariously as he did so. They were greatly amused at how the Chinese Communist Party had so cleverly outsmarted the naïve and stupid Americans.

Di ended his talk on China’s influence operations in the U.S. by saying that he could not provide further details about the work of Chinese agents without compromising their identities. But he did admit that President Trump’s trade war with China had upset decades of close ties between Washington and Beijing that the CCP’s network of agents had facilitated. If it were not for Trump, he suggested, China would still be having its way using their “old friends” at the highest levels in Washington.

The best evidence that Professor Di’s revealing speech was accurate came when it was quickly scrubbed from the Internet after it began to be circulated on these shores.

Chinese agents spend years, even decades, cultivating relationships that may one day pay off in terms of policy decisions down the road. And they do not hesitate to use any and all means at their disposal, from cash bribes and sweetheart deals to family members, to drugs and sex, as in the case of Hunter Biden. Most, but by no means all, of those who have been compromised in this way have D’s by their names.

One final comment on Eric Swalwell: For three-plus years Swalwell used his stature as a member of the House Intelligence Committee to give credence to his claims that President Trump was colluding with Russia. He would go before the TV cameras and say the most outrageous things about the President. He relentlessly promoted the fabricated Steele Dossier, with its phony stories of dalliances with Russian prostitutes, and intimated that Trump was being blackmailed.

Now it turns out that Swalwell himself was in bed with a Chinese spy, who was using him to gain information for China.

(When asked whether he had a sexual relationship with “Fragrant” Fang, he refused to comment on the grounds that — the information “might be classified.”)

Nancy Pelosi, who has known for the past five years that Eric Swalwell was a security risk, should immediately remove him from the House Intelligence Committee.

House Republican Leader Kevin McCarthy, who followed me on Laura’s show, suggested that simply kicking Swalwell off the Intelligence Committee doesn’t go far enough. McCarthy suggested that he should be forced to resign from Congress as well.

1
Pelosi receives Holy Communion at Mass presided over by Pope Francis
2
Pope Francis doubles down on restrictions of the Latin Mass in new letter
3
Princess Gloria: Global elites think they do good but actually serve the ‘prince of the world’
4
WATCH: John-Henry Westen, Michael Matt react to Pelosi’s Communion at Mass with Pope Francis
5
Arizona becomes first US state to offer comprehensive school choice for all families
Subscribe to Daily Headlines »