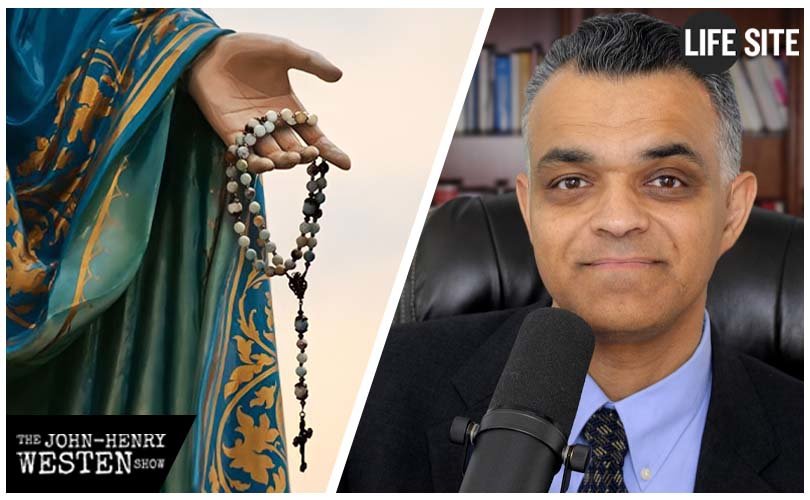 (LifeSiteNews) — Are you feeling hopeless, like the powers arrayed against us are way beyond our power to deal with? We are facing a giant and we don’t even feel like we have David’s five smooth stones, in fact it feels like we are facing an army of Goliaths. So, what are we to do?

Well, it’s time … it’s time to take up our weapons and fight. This October 7 is the feast of Our Lady of Victory, also known as the feast of Our Lady of the Most Holy Rosary. It was instituted in thanksgiving and commemoration of the greatest naval victory of ancient days – the Battle of Lepanto which stopped the Islamic Ottoman empire from taking over all of Europe.

Pope Pius V prayed the rosary throughout, as did the soldiers that fought in battle. And it was a miraculous victory. It’s now time for us to take up our weapons and fight in today’s battle against a global tyranny being foisted upon us with a health dictatorship.

There is an amazing account you can read about St. Padre Pio at the Marian Room blog. St. Pio always wore the rosary around his arm at night. A few days before his death, as Padre Pio was getting into bed, he said to the friars who were in his room, “Give me my weapon!” And the friars, surprised and curious, asked him: “Where is the weapon? We cannot see anything!” Padre Pio replied, “It is in my habit, which you have just hung up!” After having gone through the pockets of his religious habit, the friars said to him: “ Padre, there is no weapon in your habit! … we can only find your rosary beads there!” Padre Pio immediately said, “And is this not a weapon? … the true weapon?!”

I have another story to share with you about the use of this true weapon, a modern-day story of how to fight the current Communist tyranny sweeping the planet.

It is a fascinating story I was told about the fight against jab mandates. While mandates and so-called passports have been appearing across the world, England — the country once called “the Dowry of Mary” — has had remarkably few such things so far. And a small number of Catholics think that they may have found the way to push back.

In February 2021, the U.K. vaccine czar Nadhim Zahawi MP repeatedly said the government had no plans to introduce vaccine passports. He called such passports “discriminatory.”

“Vaccines are not mandated in this country,” he said, and “Boris Johnson has quite rightly reminded parliament that’s not how we do things in the U.K., we do them by consent.”

But to everyone’s surprise, in July 2021, Prime Minister Johnson announced that by the end of September, only fully-vaccinated persons — a term more open-ended than “double-vaccinated” — would be granted entry into “nightclubs and other venues where large crowds gather.” Not even a negative test would be sufficient.

Inspired by the sermon of a priest at the Traditional Latin Mass, several Catholics decided to launch a prayer Crusade with the powerful 54-day Rosary Novena.

So let me tell you a little about this powerful novena.

This novena first appeared in 1884, when a very sick young girl named Fortuna Agrelli and her family prayed a novena of Rosaries for her healing.

According to the story, Our Lady appeared to young Fortuna, who begged her for aid. Our Lady told her that she can refuse no petition made to her under the title of “Our Lady of the Most Holy Rosary.” “For this name,” she said, “is most precious and dear to me.”

Our Blessed Mother told Fortuna to make three rosary novenas to her and promised that she would grant her petition. She later appeared again and told her: “Whoever desires to obtain favors from Me should make three novenas of the prayers of the Rosary, and three novenas in thanksgiving.”

Fortuna did what the Mother of God commanded, and she was healed.

The most common way of praying this novena departs from the usual alignments of the mysteries with the days of the week, and instead we pray the Joyful Mysteries one day, the Sorrowful the next, followed by the Glorious – and it repeats this cycle for 54 days.

But our friends in England decided that desperate times called for desperate measures and agreed amongst themselves that they needed to pray 15 decades a day. “After all,” one reminded his fellows, “Do you want to avoid the Gulag or not?”

These Englishmen were joined by about 100 people from around the world. Together, they prayed for the end of this tyranny, the graces they needed for the time ahead, and for the Triumph of Holy Church.

To their surprise, on September 12 – the old date of the Feast of the Holy Name of Mary – the U.K. government announced that they were scrapping plans for vaccine passports. Zahawi’s successor, Sajid Javid MP, said, “We shouldn’t be doing things for the sake of it. I’m pleased to say we will not be going ahead with plans.”

Had the power of the Rosary kept these wicked plans at bay? It certainly seemed so. They finished their 54-day crusade on Friday September 24 — happy but still watching the skies for storms.

And so, they came. On September 27, only three days after the 54-day rosary ended — as if no longer held back by the power of the Holy Rosary — the U.K. Government published plans to introduce “mandatory COVID certification” as an option for what they are calling “Plan B.”

The proposal explains, “If the data suggests the NHS is likely to come under unsustainable pressure, the government has prepared a Plan B for England.” Given that the British papers suggest that every year is a crisis year for the NHS, Plan B seems certain to happen.

The details are clear, in spite of the euphemistic names: These are vaccine mandates and passports. The government has launched a consultation on how to implement this “certification,” which closes in less than a fortnight. At present, there are no proposed conscientious exemptions.

In the Book of Exodus, the People of Israel met and fought with the People of Amalec. Moses sent Joshua with his men to fight, while he went with Aaron and Hur to watch from the top of a high hill, with “the rod of God” in his hand.

And when Moses lifted up his hands to pray, his people overcame their enemies. But if he let them down a little, Amalec prevailed. The fate of Israel lay in Moses’s arms and prayers — they could only win while he kept his hands aloft.

But when his arms began to grow heavy, what did they do? Aaron and Hur sat the great prophet down, and they held up his hands for him. And they held them up until sunset, and Joshua put their enemies to flight.

What are we to do? What else can we do but keep our arms lifted in prayer to God, through his Holy Mother, that we be delivered from these things.

This is certainly what our English friends have decided, and they have invited me to join them – starting Thursday, October 7, the month of the rosary, and ending on November 29.

This time the intention is even simpler: Stop vaccine mandates being imposed and overturn them where they already have been.

We cannot live under a two-tier society, in which we are compelled to take vaccines against our will or our conscience. We cannot live in a “papers please” society, where basic human liberties are stripped away because we will not take rushed and dubious injections. We cannot let vaccine mandates get even a foot in the door – for while Catholics might not care about nightclubs, we know that churches and grocery stores will be next.

So join us in this worldwide crusade of prayer, this worldwide 54-Day Rosary Novena. Join us in making this sacrifice, and if you’re up for it, let’s push ourselves to say 15 decades. Yes, it’s hard; yes, we may not succeed every day; yes, not everyone can do this. But all of us can try. “After all, do we want to avoid the Gulag or not?”

Notice as in the Battle of Lepanto and Padre Pio’s own battles, praying in union with work was needed. So we may be called to confront those insisting on vaccines with our religious exemption, or conscientious exemption.

We have to walk through that door and chance a confrontation with guards, or employers. But we will do that in prayer, trusting in the help of Almighty God who will never give us anything beyond what we can bear with His help. We will be victorious. With God nothing is impossible.

Let us take heart from these beautiful words from Sister Lucy of Fatima, who saw Our Lady and was shown visions of the horrible days in which we live. Let us draw comfort and reach for our rosaries as we hear them.

The Most Holy Virgin, in these last times in which we live, has given new efficacy in the recitation of the Holy Rosary. She has given this efficacy to such an extent that there is no problem, no matter how difficult it is, whether temporal or above all spiritual, in the personal life of each one of us, of our families, that cannot be solved by the rosary.

There is no problem, I tell you, no matter how difficult it is, that we cannot resolve by the prayer of the Holy Rosary.