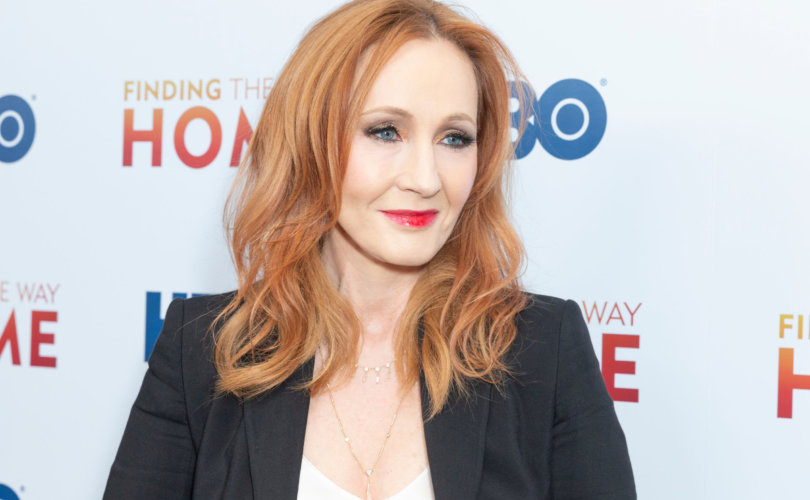 June 11, 2020 (LifeSiteNews) – I’m not a great fan of J.K. Rowling. The Harry Potter series ends with a strange apologia for the culture of death. Watching her 2016 film, Fantastic Beasts and Where to Find Them, ended any lingering doubts. A triumph of computer-generated special effects, the plot is an attack on religion, at both obvious and subtle levels: something for another post perhaps. I came away thinking that with this film, and of course her notorious post-mortem outing of her fictional character Dumbledore as a homosexual in 2007, fame and fortune had seized her for their own. She had decided to maximize her sales by serving the progressive fashions of the day. From now on, we can expect the kind of material Hollywood will instinctively love.

It is all the more surprising, then, to see her emerge as a champion of the rights of women, in defiance of the trans lobby. She has generated a few Twitter storms already and has now written an essay setting out her position in some detail. She has been ritually denounced by actors who played leading roles in her films, and, as she must realize, she is risking a lot of future revenue, as well as death threats, by leaving the winding but brightly-lit path of wokery. However she is already extremely wealthy, and has an immense fan base, so her vulnerability to the lynch mob is unusually low for a celebrity. This is of considerable significance, because people who defy the Jacobins of our age usually disappear from public view, if they refuse to back down. Rowling is not going anywhere.

Her essay addresses the trans lobby with tough love. She sets out how various feelings and social pressure can easily lead to children deciding that “transitioning” to the other sex is an attractive option, pointing out that a disproportionate number of these are now autistic girls. As another writer expressed it, many girls find the idea of “pressing the pause button on puberty” attractive, which is part of what the trans lobby seems to offer. I have written here before about the intense and abusive sexual culture in many schools which makes this very easy to understand. As Rowling points out, herding them all onto a conveyor belt of hormone treatment and surgery is not necessarily what they need, and this policy is leaving a trail of devastated lives in its wake: people who want to “destransition,” but too late to save their chance of having children of their own.

This kind of argument is invariably met by the claim that to suggest a moment for reflection and exploration of the possibilities for young people seeking to “transition” will lead to them committing suicide. Rowling responds:

In an article explaining why he resigned from the Tavistock (an NHS gender clinic in England) psychiatrist Marcus Evans stated that claims that children will kill themselves if not permitted to transition do not “align substantially with any robust data or studies in this area. Nor do they align with the cases I have encountered over decades as a psychotherapist.”

I believe that the gender debate can only ultimately be resolved by reference to a coherent metaphysical account of sex and gender: what “male” and “female” really mean. Rowling does not attempt this. However, the debate is now couched in such extreme terms, that even a mild dose of common sense has electrifying implications. Trans activists will not easily forgive Rowling for writing this:

I want trans women to be safe. At the same time, I do not want to make natal girls and women less safe. When you throw open the doors of bathrooms and changing rooms to any man who believes or feels he’s a woman – and, as I’ve said, gender confirmation certificates may now be granted without any need for surgery or hormones – then you open the door to any and all men who wish to come inside. That is the simple truth.

The deliberate conflation of psychologically traumatized trans individuals, towards whom we should feel nothing but sympathy, and opportunistic abusive men, for example rapists who “identify” as women in order to rape the inmates and staff of women’s prisons, is a key point in trans ideology. Why not condemn the rapists and invite us all to limit our sympathy to the others? Because to do so would require them to come up with some kind of objective test or criterion of gender, and that would undermine the whole project.

We owe a debt to Rowling for starting to tug on a loose thread which has the power to make trans ideology unravel.