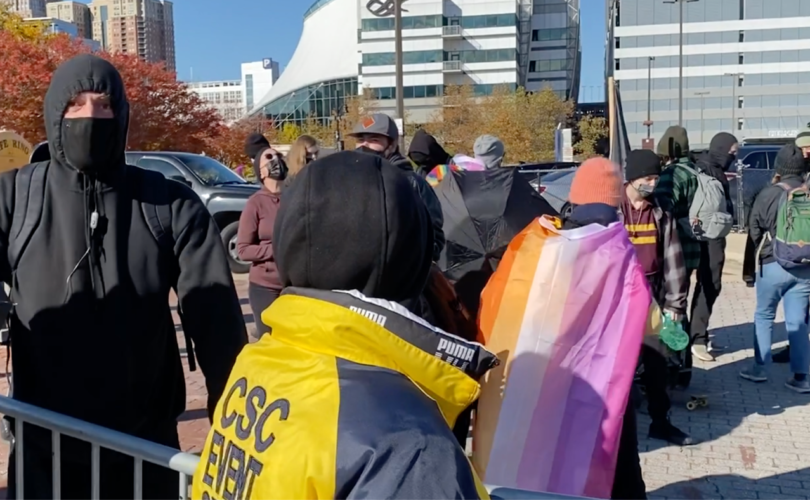 BALTIMORE (LifeSiteNews) — When I woke up on Tuesday morning, I had no idea that later that day I would face an Antifa thug yelling “F–k you, Doug” at me and denigrating LifeSiteNews while proclaiming, “I love abortion.  Abortion is awesome!”

Yet that’s what happened.

Crazed Antifa protesters looking to stir up trouble and provoke violence gathered outside Church Militant’s “Bishops: Enough Is Enough!” prayer rally taking place on a pier next door to the luxury waterfront hotel where the United States Conference of Catholic Bishops (USCCB) was holding its annual fall assembly.

As the rally proceeded with one inspiring, often fiery speech after another aimed at getting U.S. bishops to take greater responsibility for predatory clerical homosexual sexual abuse, a police helicopter could be heard circling low overhead.

I left the giant tented pavilion and headed to the venue entrance to investigate and found security officers holding off masked Antifa protesters shouting obscenities targeting the Catholic speakers.

As I approached the scene with my iPhone video camera held high, the apparently camera-shy Antifa thugs repeatedly attempted to block my view with umbrellas.  One young woman wearing a trans flag as a cape planted herself in front of me with her back turned to make sure I received her pro-transgender message loud and clear.

After being informed of my name, one of the thugs looked me in the eye and yelled, “F–k you, Doug.” Then noticing the LifeSiteNews press pass hanging from a lanyard around my neck, the same thug called out LifeSite and declared, “I love abortion. Abortion is awesome!”

If you look closely, at the same time Fr. James Altman can be spotted on the right side of the video being escorted past the protesters into the rally site. Antifa members shouted at him, “Keep your Rosaries off my ovaries.” Another screamed — inexplicably — at Fr. Altman, “Pray for the people you’ve killed, you bigot.”

The presence of Antifa at the Church Militant event raises some interesting questions:

Who put Antifa up to this?  Remember, forces within the Baltimore City government, cozy with the Catholic bishops, did everything within their power to prevent the Church Militant prayer rally from occurring.