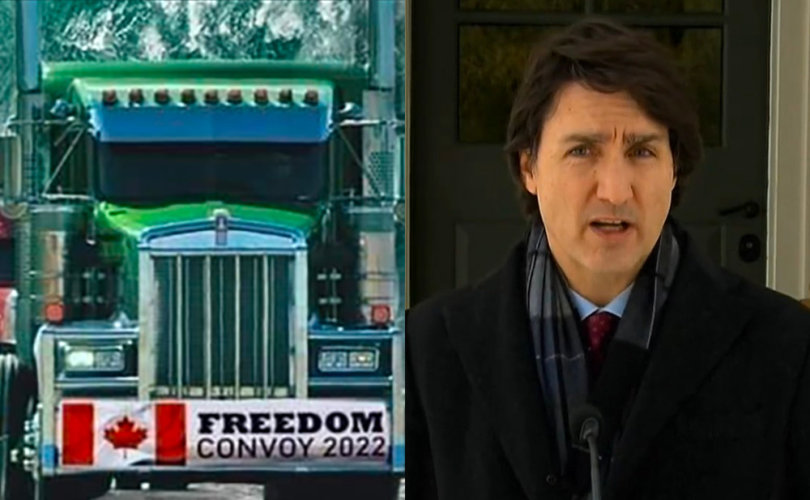 (LifeSiteNews) — I sometimes draft a Note from the Editor that is displayed at the top of the LifeSite Daily News emails that are sent to our massive list of subscribers. The Note usually highlights the significance of some of the more important news items or trends of the day. Readers often express appreciation for these Notes. However, the downside is that non-subscribers never see the Notes because they are not published to the website and I have been getting more requests from non-subscribers to be able to read the Notes. So I begin this today on my LifeSite blog.

The giant, cross-Canada trucking convoys have caused astonishingly positive Canadian and international reactions. They have become so unexpectedly massive and wildly popular that they are threatening globalist plans.  The elites have therefore had to somehow stop them from continuing to wake up the demoralized masses suffering from two years of contrived Covid tyranny.

The only news that you will be able to trust on this will be from LifeSite and many other alternative news services, and certain individuals in the mainstream such as Tucker Carlson, who has been doing a phenomenal job reporting on this incredible Canadian protest movement.

The leaders of the Trucker Convoy 2020 movement are unusually well informed about the real purposes of the lockdowns, mask and vaccine mandates and other medical tyranny policies that have been crushing freedom and prosperity around the world. They are not at all about protecting health – no matter what lying Justin Trudeau, Joe Biden, and other national leaders claim. The Canadian truckers have sparked a spontaneous international movement of hope that there may finally be a way to end the disastrous, terribly oppressive, seemingly endless government policies that are destroying health, jobs, businesses, religious worship, hope, and freedom in general.

The trucker leaders understand that this is all about imposing a Great Reset, Communist Chinese type of New World Order using COVID digital passports that are essential for their global system of total economic control and slavery.

Throughout the press conference, he continued to state falsehood after falsehood about the truckers and projected a total disrespect and hatred for these many thousands of essential workers, their families, and the millions of Canadians who have been cheering them on. There have been large cheering crowds, regardless of bitterly cold weather, from overpass to overpass and at all stops, as they traveled to the national capital of Ottawa from different parts of Canada to demand an immediate end to catastrophic government Covid mandates.

If anyone is a threat to Canada and to Canadians, it has now become very obvious it is Justin Trudeau. He is far too comfortable with constant lying and deliberately turning good Canadians against each other with the help of his bought media and obedient MPs who serve him instead of those who elected them.

The truckers realize that Canada is in great danger right now, and unless Canadians all awaken and take determined action to save their nation, it will be soon lost to a totalitarian New World Order that Trudeau has been trained by his World Economic Forum mentor and globalist Klaus Schwab to hand Canada over to.

Trudeau is NOT a sincere Canadian. He sees himself as a leader of the ruthless New World Order. He is not loyal or patriotic toward Canada. He is a globalist who is scheming to deliberately destroy the Canadian economy and culture in order to transform it into a slave state of the New World Order. He has made it very plain that he is committed to this in his own public statements containing explicit Great Reset phrases. If this man is not removed from power soon, there will be no more Canada as a separate, sovereign nation.

So please, Canadians, and citizens in many other nations as well, stop listening to and watching the poisonous legacy media. You will not get any honest news reporting from any of them on these most critical of all issues. Do not watch any television news, do not read any newspaper news, do not listen to any radio news. At this time, they are almost ALL essentially bought and owned by governments. The only news media that will tell you the truth now is the alternative conservative media.

We have now reached the stage of a needed, dramatic sea change in citizen news-gathering habits – as a dire need for political and social survival and defense of all rights and freedoms. It has reached a crisis stage.

The media today are one with government. They are an extension of government power and propaganda overseen and directed by a small group of extremely wealthy and powerful, international business and political elites. Face that reality and then we will have a chance of defending freedom. The same must be said for the citizens of the United States, France, Austria, Australia, New Zealand and most other nations.