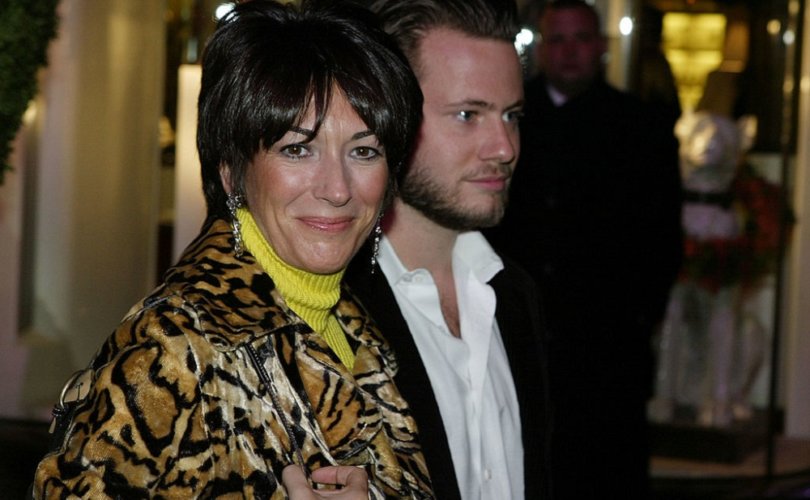 July 22, 2020 (LifeSiteNews) — On July 2, socialite Ghislaine Maxwell was arrested by the FBI in Bradford, New Hampshire. Maxwell was the longtime girlfriend of billionaire financier Jeffrey Epstein, who allegedly killed himself in prison last year, where he was awaiting trial on charges of sex-trafficking. Maxwell, who purportedly enabled Epstein’s sexual abuse of minors and procured young girls for him, has now also been charged with having “assisted, facilitated, and contributed” to the sexual abuse of underage girls. Many powerful men — including Prince Andrew, who resigned from royal duties over his relationship with Epstein, and Bill Clinton, who is alleged to have had an affair with Maxwell — are likely very worried about what Maxwell will reveal.

Earlier this month, one anonymous accuser granted an interview to Fox News, alleging that Ghislaine Maxwell sexually assaulted her between the ages of fourteen and sixteen in Florida around 1991. Jane Doe, who is a plaintiff in a lawsuit filed against Epstein’s estate, told Fox News that Maxwell was as “evil” as Epstein and that the socialite had raped her “more than 20 or 30 times.” Doe also described how Maxwell was essential to Epstein’s criminal behavior, selecting and grooming girls for him to abuse while posing as a confidante. The girls were later kept silent by a combination of litigation, blackmail, and threats.

And as is so often the case with sexual crimes, abortion is a part of the Epstein-Maxwell story as well. Pimps, rapists, sex-traffickers, and serial sexual abusers rely on abortion to destroy the human evidence that a crime took place, and the abortion industry enables these crimes to continue. Girls are taken (or sent) to abortion facilities, their pre-born babies are killed and removed, and they are returned to their abusers. Often, there are no questions asked. Planned Parenthood in particular has a long track record of failing to report suspected sexual abuse.

According to Jane Doe, she was sexually abused by Maxwell and Epstein for two years, after which she became pregnant with Epstein’s child. After she had an abortion, she alleges that she was again drugged and gang-raped by Epstein, Maxwell, and others as punishment because her tormenters suspected she had told her grandparents about the abortion and feared they would go to the authorities. She says Maxwell ordered her to stay silent about both the abortion and the abuse. “Ms. Maxwell was a participant,” Doe told Fox News, “and she made it very clear that I was to keep my mouth shut or harm would come to my family and myself and harm did come to me.”

“I had never been with anyone except for him [Epstein]. The fact that I had to kill my child really affected me and my family,” Doe stated. “Ghislaine was part of it and Jeffrey Epstein was a part of it and I was drugged, gang-raped, and left on the lawn and they put a gun to me. The man that drove me home said I would never, I would never come back alive if I spoke about it.” She dropped out of high school and went into hiding. “I basically kind of vanished.” Maxwell’s lawyer, Lawrence Vogelman, declined to respond to Doe’s allegations.

Abortion has come up in relation to Epstein before. Epstein’s lawyers would dig up dirt on victims during civil lawsuits (there were around two dozen of them), and the lawyers would question the girls about their sexual histories, social media posts, and any drug or alcohol use. One girl in particular was asked about abortions she’d had — and her parents, who were Catholic and were unaware of their daughter’s abortions — were also deposed and grilled.

It is still staggering to consider that the world’s wealthiest power brokers visited Epstein’s “Pedophile Island” while the systemic sexual abuse was an open secret. The sordid tale of Epstein and his celebrity pals would seem the stuff of conspiracy theories but for the fact that so much of it is true. Young girls were preyed upon as a matter of course, and evidence of this — even babies — had to be destroyed. Sexual abuse creates entire categories of victims, and the destruction of innocence often results in the destruction of innocents.

Jonathon’s new podcast, The Van Maren Show, is dedicated to telling the stories of the pro-life and pro-family movement. In his latest episode, Mark David Hall speaks about America’s Founding Fathers, the ideals upon which our society was established, and what this means for Americans today. You can subscribe here and listen to the episode below: