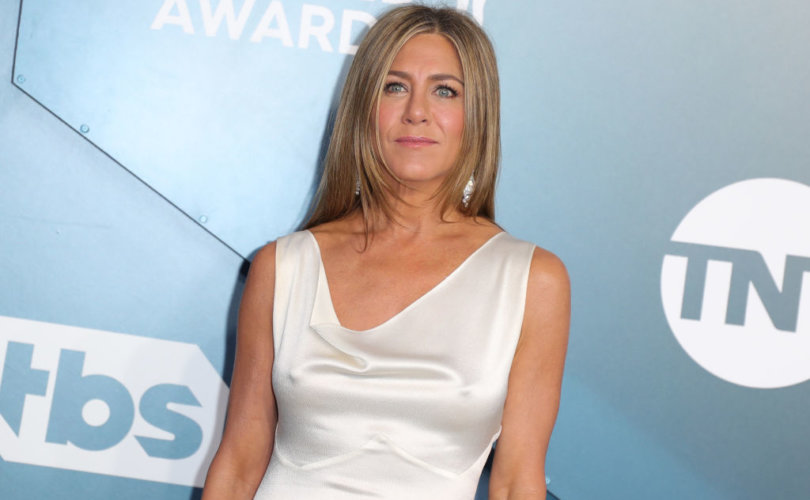 (LifeSiteNews) — The stars of the ground-breaking 1990s sitcom Friends, a cultural catalyst for the mainstreaming of the sexual revolution, have been in the news a lot of late. First there’s Matthew Perry, who wrote a memoir titled Friends, Lovers, and the Big Terrible Thing about his near-lifelong struggle with addiction that also reminded everyone just how dysfunctional and miserable the lives of most celebrities actually are. And then there’s Jennifer Aniston, America’s one-time girl-next-door and star of the big and small screen who, at the age of 53 and after two failed marriages, is sharing new details about her life.

Most of those details will only be interesting to the sort of people who buy tabloid magazines. But one detail that Aniston shared is, I think, significant. Speaking to Allure reporter Danielle Pergament, Aniston noted that she spent years trying to get pregnant, including using In Vitro Fertilization. IVF didn’t work for Aniston—meaning that none of the children created survived—although that is, of course, not the terminology that was used. “I was throwing everything at it,” she said. “I would have given anything if someone had said to me, ‘Freeze your eggs. Do yourself a favor.’ You just don’t think about it. So here I am today. The ship has sailed.”

It is a reflection on the fundamental sickness of our culture that a 53-year-old woman, looking back at her life and career and speaking about how desperately she wanted children, would not conclude that she should have tried to have children when she was young—but would instead say that she wish someone had told her to “freeze her eggs” for later, once she had accomplished all she wanted and had time for children. “Egg-freezing” involves “harvesting” a woman’s eggs from her uterus and then “freezing” them for future use, usually with IVF. The eggs are stored in a cyrobank which charges rental fees (usually more than $1,000 a year), and “thawing out and implanting” costs about $11,500 in the US.

RELATED: These Hollywood celebrities are freaking out over major pro-life victories

— Article continues below Petition —
Stand with pro-life priest Fr. Fidelis facing charges for trying to save unborn babies
Show Petition Text
11718 have signed the petition.
Let's get to 12500!
Thank you for signing this petition!
Add your signature:
Show Petition Text

As more women opt for careers and delay the possibility of children for when they are older, the trend of “egg-freezing” has grown. Google, Facebook, and other corporations actually pay women to freeze their eggs in order to keep them at their desks and away from families longer. Have a career and make your mark on the world now, women are told, and you can “have it all” later on. It is, as Aniston found out, a lie. As Evie Magazine noted: “Women under 38 have between a 2% and 12% chance that a healthy frozen egg will result in a baby.” The corporations, of course, are chuffed by this outcome. Childlessness is the point. This has given rise to an even viler industry in which wealthy women pay young women—often university aged, cash-strapped girls—for their eggs.

RELATED: Homosexual men are now demanding a ‘right’ to a woman’s eggs and womb

This brings me to one of the great lies that the sexual revolution sells—not overtly, but implicitly: that we will always be young. Fundamentally, marriage and family are long-term propositions. Forgoing decades of nightclubs, promiscuity, and interchangeable partners in favor of a husband or wife is, one hopes, investing in a future with someone who will love you more when you are old and gray, and your looks are not what they were. Those who choose to “play the field” will realize, at one point or another, that the field is occupied by the young and that there is an imperceptible line that everyone must cross in the sexual hunger games played by the porn-fuelled youth—a line that divides the players and the pathetic; the charming from the creepy.

Growing older with a spouse and family can be a beautiful thing. Growing older in the sexual marketplace glorified by the big and small screen is not. Jennifer Aniston has revealed that she spends a small fortune in her slowly failing attempt to stay looking young, and she has openly discussed Hollywood’s attitude towards aging. “There is this pressure in Hollywood to be ageless,” she said. “I think what I have been witness to, is seeing women trying to stay ageless with what they are doing to themselves.” But there is something desperately sad about Aniston’s decision to pose for a near-nude photo shoot in Allure Magazine. The title of the article announces that she “has nothing to hide.” The truth is that she is sending a message. She may have missed her chance for children; she may be single. But I’m still beautiful, she is telling us. I’m still young.

The sexual revolution isn’t kind to sex symbols who have the audacity to become middle-aged. But by the time the lies become clear, it is usually too late.