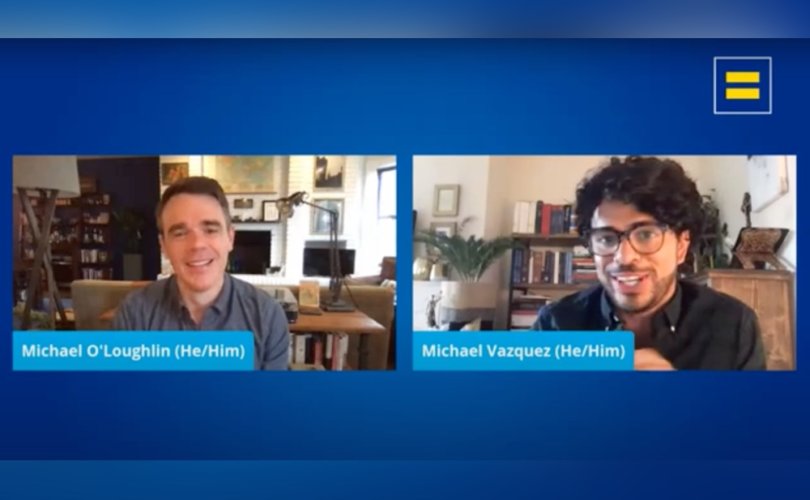 WASHINGTON, D.C., July 1, 2020 (LifeSiteNews) – A journalist for Jesuit-run America magazine has snagged this year’s “Excellence in Religion Coverage Award” from the Association of LGBTQ Journalists (NLGJA) for a podcast series about the Catholic Church’s response during the early days of the AIDS crisis.

While writer Michael O’Loughlin has done a remarkable job collecting first-hand stories from those who survived the darkest days of the AIDS epidemic, the homosexuality-as-normal perspective which frames the nearly four-hour audio series will sound foreign if not antithetical to Catholics steeped in the teachings of the Church.

That perspective is perhaps unsurprising, given that O’Loughlin identifies as a “gay Catholic,” and works for America Media which, under Jesuit guidance, has long pushed for acceptance of homosexuality within the Catholic Church.

“I want to share the stories from the height of the AIDS crisis – both those that inspire and those that infuriate – so we can remember what happens when society turns its back on those in need,” explains O’Loughlin at the outset of the series. He repeatedly suggests that only Catholics who affirmed homosexuality as they cared for those with AIDS and the “gay community” at large as “inspiring” while regarding those who sought to uphold Church teaching as problematic if not “infuriating.”

Early on in the series, O’Loughlin faults an October, 1986 Vatican letter banning gay groups from Church properties and which asserted Church teaching that homosexuality is “ordered to an intrinsic moral evil” and an “objective disorder” for alienating a generation of homosexuals from the Church.

“The timing of this letter, at the height of the AIDS crisis felt especially cruel to many of the gay Catholics I interviewed,” says O’Loughlin. “To some if felt like they were being kicked while they were already down, plus the letter seemed to blame gay men for the onslaught of AIDS.”

Yet the Church was presenting truth, offering teaching in the best interest of the same-sex attracted.

Like O’Loughlin, I am a same-sex attracted man, albeit a chaste one. During the late 1980s/early 1990s I volunteered one night per week at Mother Teresa’s home, Gift of Peace, in Washington, D.C., caring for men with AIDS whose bodies were ravaged by disease, or more often than not, multiple diseases.

My experience there served to confirm the wisdom of the Church’s teaching while revealing the heartlessness of promoting the lie that homosexuality could ever be a good thing or be reconciled with natural law.

“Congratulations to my friend Mike O'Loughlin on this award, richly deserved for his superb podcast series ‘Plague’ on the Catholic Church and the AIDS crisis,” wrote America Editor-at-Large, Father James Martin, S.J. “We’re all proud of him at America Magazine.

Congratulations to my friend @MikeOLoughlin on this award, richly deserved for his superb podcast series “Plague” on the Catholic Church and the AIDS crisis. We're all proud of him at @americamag #PrideMonth https://t.co/zpy3ERY8Dj

Martin himself has a lengthy record of pro-gay activism ranging from his many speeches and media appearances promoting homosexuality to his retweeting of a complaint that priests can’t “bless” gay unions to suggesting that the Church is full of “homophobia” and “marginalizes” the same-sex attracted. Earlier this year he addressed 150 Catholic college and university presidents, urging them to promote “inclusion” on their campuses by promoting “LGBT-affirming liturgies,” permitting students to choose their own pronouns, and holding “Lavender Graduations.”

Interestingly, the announcement of O’Loughlin’s award coincided with the release of a video hosted by Martin, titled “Outreach 2020: Catholic Leaders Speak with the LGBTQ Community,” produced after a conference by the same name slated to take place at Fordham University this month had to be postponed due to the coronavirus pandemic.

In a half-hour interview this week with the Washington, D.C. LGBT lobbying giant The Human Rights Campaign, O’Loughlin said he was hopeful that the Church will progress in its acceptance of homosexuality and transgenderism, and “adjust how it approaches these issues,” although he admitted that, “it’s just the truth, that where the Church is growing, attitudes are more traditional.”

In the collecting of this audio archive, O’Loughlin has done yeoman’s work.

Three years in the making, the podcast along with the hours of interviews which are not part of the published series are an important historical archive capturing the experiences of an aging generation who might not be around to tell their tales in another decade or two.

Titled, “Plague: Untold stories of AIDS & the Catholic Church,” the podcast explores stories of those who lived through the crisis as gay men, many of whom sought to maintain their Catholic faith as AIDS took the lives of their friends and partners; of priests and sisters who ran parishes and outreaches; and medical professionals who served on the frontlines against AIDS.

Many of the testimonies emanate from the 1980s gay meccas of New York City and San Francisco, but O’Loughlin also found compelling stories in rural America.

“Reporting on Catholicism and LGBT issues sometimes makes me feel we’re in unsettled and uncharted waters,” said O’Loughlin. “Sometimes it’s not clear to me how to stay afloat.”

Yet the Church’s teaching on LGBT issues is settled, and clearly charted. O’Loughlin is unclear about how to stay afloat because he, along with many of his America magazine comrades, rejects the Church’s wise counsel in order to justify his peculiar views.

God might want to ask O’Loughlin the same question he put to Job: “Will you even put me in the wrong? Will you condemn me that you may be justified?” (Job: 40:8).

“One thing became clear early on in my reporting: There is so much fear around the issue of LGBT people in the Church. This fear sometimes feels justified. There’s a small but emboldened movement that uses the power of social media to harass and condemn LGBT Catholics and their supporters,” he laments.

“I’m grateful that this podcast has provided space for me to report on my community, to capture some of our history,” said O’Loughlin, “and to complicate the narrative a bit.”