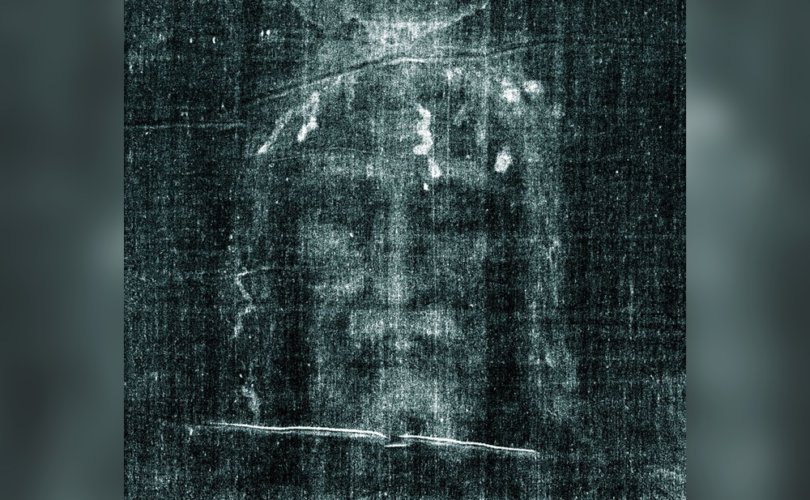 Shroud of Turin. Secondo Pia's 1898 negative of the image on the Shroud of Turin has an appearance suggesting a positive image. Universal History Archive/UIG via Getty Images

March 26, 2019 (LifeSiteNews) – On March 25th Catholics around the world celebrate the feast of the most awesome mystery that has ever taken place in the created universe: the Incarnation of the Son of God in the womb of the Virgin Mary. Everything God did for Adam after his fall, for the patriarchs and prophets, was done with a view to the accomplishment of this mystery; everything that happens in time after it refers back to it, whether for glory or for shame. It is the axis on which all of reality hinges.

That is why Christian civilization has always arranged its calendars with “B.C.” and “A.D.”—“before Christ” and “Anno Domini” or “year of the Lord,” counting from His entry into this world of time, to deliver it from slavery to sin and death. (And this is why Christians should resist, to the fullest possible extent, using “BCE” and “CE,” “before the Common Era” and “Common Era.” Talk about politically correct nonsense!)

“The Word was made flesh, and dwelt among us, and we have seen His glory—glory as of the only-begotten of the Father, full of grace and truth” (Jn 1:14). With these majestic words culminated the recitation of the Prologue of John’s Gospel at the end of every Mass, from medieval times through Pius V’s missal of 1570 all the way to the 20th century, until its undignified abolition on March 7, 1965. And yet, no matter how much worldlings and even churchmen may resist the uncomfortable proclamation of an incomprehensible mystery that forces down the pride of human reason and demands our adoration on bended knee, the mystery asserts itself again and again as the irrepressible source of the Christian Faith, just as we have seen that the Last Gospel has returned into our churches with the increasing spread of the traditional Latin Mass.

In the Incarnation, as in the Holy Eucharist that is its never-silenced echo through the ages, the invisible God has made Himself visible to us, the eternal has entered into time, the inaccessible has drawn near, the infinite has taken on limits—without ceasing to be infinite, inaccessible, eternal, invisible. God, who is pure Spirit, has in Jesus Christ a human heart, a human face. The Son who was born of the Father before all ages, is born in time of the Virgin Mary.

In this way, God responds to the human desire to see and hear one’s friend, one’s beloved. God knew that, for fallen man, He was too remote, too unreachable—although in reality He is closer to us than we are to ourselves, closer than a man’s breath or the beating of his heart. If we ask the question: What does God look like? The answer is: Jesus Christ, who says to His apostle Philip: “He who sees me, sees the Father.” Christ is the human face of God.

This, then, is the basic reason (there are others) why all Christians who maintain the faith of the apostles—not just Eastern or Byzantine Christians, but Western or Latin ones as well—make use of images of Christ, of His Mother, and of saints, in their worship. The Word who became flesh in Jesus has given us a physical reality to depict, and through that depiction we show our worship or veneration of the original, just as when we kiss a photo of someone, we are not showing affection to a scrap of paper but to the person photographed. Christians also make a sharp distinction between adoration, which is given to God alone, and veneration, which is rightly accorded to all of God’s friends, the good angels and saintly men and women. If we refuse to worship Christ as depicted in an icon, we sin against Him, and if we refuse to venerate His friends, we offend Him.

So essential to Christianity is the place of the image or icon, found throughout the entire history of the Church from ancient times on, that a denial of it is tantamount to a denial of the Incarnation and thus of the very essence of Christianity. Arguably we would be dealing with a sort of docetism. Docetism is the heresy that the humanity of Christ was only an appearance, not a reality; God, in fact, did not become flesh (that is, man), but projected Himself like a hologram, which “did” and “said” various things for our instruction.

This is not the orthodox faith. True Christians adore God made flesh, the Incarnate Word; they adore His bodily presence in the Most Holy Eucharist, in which He remains among us until the end of time in His glorified reality, under the veils of bread and wine; they adore His holy Face, His sacred Heart, His precious wounds, the perfect temple of God that is His humanity (cf. Jn 2:21), through the images that portray Him. Precisely because the image is an image—that is, a representation of something else that really exists in bodily form and, in its bodily form, demands our adoration (cf. Mt 2:11, 8:2, 9:18, 14:33, 15:25, 20:20, 28:17, etc., and especially Jn 20:28)—we are never in danger of the sin of idolatry; as St. Basil the Great (330–379 AD) famously said: “The honor that is given to the icon passes on to its prototype [i.e., original].” An unwillingness to bow before a depiction of Christ (naturally, on the condition that we recognized it as such) would mean that we do not actually believe in His divinity or His true humanity. In like manner, an unwillingness to venerate images of the Most Holy Mother of God and Ever-Virgin Mary, or of the angels and saints, would signify disrespect to them as well as to their God and Lord.

Because the Catholic faith is incarnational, the truths in our creed are meant to be woven into the fabric of our daily lives. This interweaving of transcendent and terrestrial is greatly aided by concrete and tangible reminders of God everywhere, in the home, in schools, on street corners, in public places and businesses.  All these symbols—paintings, statuary, shrines, or other such things—have the purpose of making divine realities approachable, in order that we might be called and recalled to our identity and purpose in life. The multitude and variety of these reminders are like alarm clocks to wake us up from our earthly sleep, and their accessibility to our senses ensures that the message will not be missed. When we consider how the darkness of our mind, the weakness of our will, and the cares of life make it difficult for us to dwell for long on spiritual and heavenly things, we see all the more how important it is to surround ourselves with icons, images, signposts dotting the road, guiding us to our final happiness.

Such reflections prompt sobering thoughts about the state of soul of iconoclasts throughout the history of the Church, be it the original iconoclasts of the Byzantine empire, the Protestant smashers of statues, panels, and reliquaries in the tumultuous period of the Reformation, or the postconciliar Gestapo that confiscated and destroyed books, altars, altar rails, vestments, vessels, furnishings, and every other image of traditional Catholicism on which they could lay their hands. In an age as characterized by iconoclasm as ours has been, every Catholic should heed the wise advice of Aristotle to “bend the stick in the opposite direction,” pursuing the creation, restoration, and honoring of images with all the more zeal, lest the axial mystery of the Incarnation be hidden or silenced.