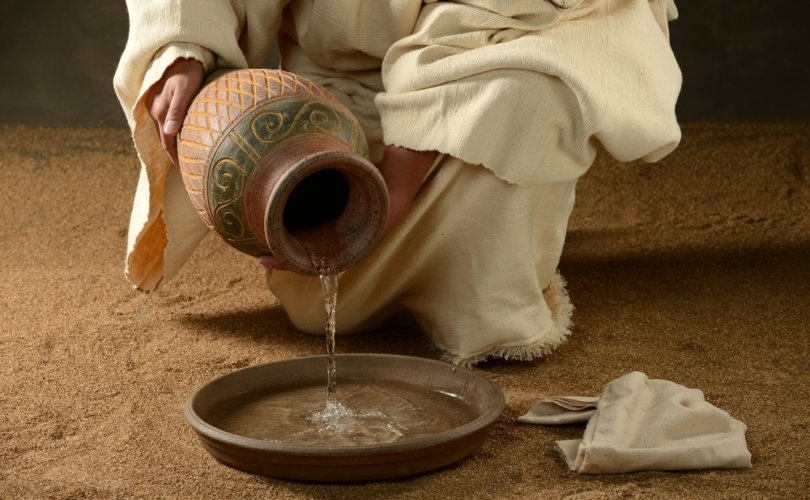 April 9, 2020 (LifeSiteNews) — In the Gospel of St. John, the focus of the account of the Last Supper is not the Institution of the Mass, but the “Mandatum”: Jesus’s command to the twelve apostles to love and serve each other. Christ introduces the point by washing their feet, usually, in the ancient world, the job of a slave. He is not setting aside His authority in doing this, but demonstrating what it is to have authority. To have authority over others is to serve them.

In the changes to the Holy Week services that took place in 1955, the place of the Mandatum, and its ritual washing of feet, was emphasized, though it remained optional. However, its focus was subtly changed. Before 1955, bishops and priests washed the feet of the poor after Mass, thirteen of them, and they were then given clothing and money. After 1955, it became part of Mass, and the people having their feet washed were more closely identified with the apostles: their number was reduced to twelve, and the connection with almsgiving was lost. The pre-1955 ritual was not a specifically clerical thing, but a survival of the once widespread practice of kings and queens, lords and ladies, abbots and abbesses, of washing the feet of their inferiors and giving them alms. British monarchs still mint special coins to give out on this occasion, though, sadly, they no longer wash anyone’s feet.

In this way, Christ’s example was understood as a model not just for clerical leadership, or the relationship between bishop and his priests, but about the nature of Christian leadership in general, religious or secular. As He says in the Gospel of St Mark, “Whosoever of you will be the chiefest, shall be servant of all” (10:44).

This is an important lesson for all those with authority: over a family, a school, a commercial enterprise, or a nation. It is not a lesson in anarchism: Christ is not saying there should be no authority. On the contrary, as He remarks after the foot-washing, “Ye call me Master and Lord: and ye say well; for so I am” (John 13:13). Christ’s authority over the apostles, over the Church, and over the world is as absolute as any authority could be. Yet this authority is exercised for the good of the community He governs. It is in this way that our Lord models all leaders: not in being laid back about His authority, not in disowning it, but in exercising it — not for His own ease and glory, but for the good of those over whom it is exercised.

Today there is a crisis of authority. Although the modern state is in no doubt about its right to control its citizens, the moral basis of that right has become entirely opaque, and as the State has increased its power, it has undermined or completely abolished the authority of other institutions. The idea that the Church exercises coercive authority over Catholics, or parents over their children, is widely regarded as horrifying, despite being obviously true. Unavoidably, the Church can and does impose obligations on Catholics — to fast, for example, or to go to Mass on Holy Days — and even the most enlightened parents determine what food their small children will eat and where they will go to school.

The Medieval state’s capacity for tyrannical rule was limited by the mass of other institutions in Medieval society that had real authority of their own, sometimes granted to them by the state and sometimes not. We are not so fortunate.

The mystery of the moral justification of authority is connected with the question of what authority is for. If it is just a matter of enriching the leader and competing with other authorities, then it is just a matter of exploitation. The Christian ideal points out another way: it is for the benefit of the community who are under authority. This being the case, being laid back about it, or letting it crumble away, is not a positive thing; on the contrary, it is an injustice to the community. The community has a right that the leader exercise authority for its good, and if he does not, then their good will suffer.

This makes it necessary to ask what the good of the community, the common good, actually consists in. At its simplest, it is the aggregate of the good of each member, but what is that? It is not the fulfilment of the desire of morally or mentally afflicted individuals to destroy themselves. Nor is it that this particular community should crush others underfoot. It must be something more objective. With allowances for the specific goals of specific communities, its leaders must acknowledge the overarching importance of the spiritual good of the community and subordinate to that every other kind of well-being or flourishing.

Christian leaders should not be afraid of their authority. They should fear, rather, the Judge before whom they will have to give an account of the use they have made of it.