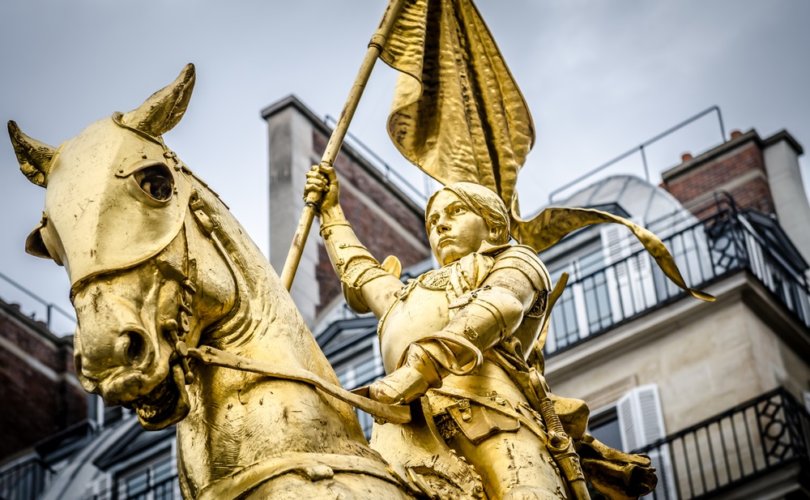 St. Joan of Arc is remarkable in so many ways. I would like to draw attention to a few aspects of her life and character that hold pointed lessons for us today.

First, as a young woman, Joan practiced a deep, humble, and serious piety. The age-old practices of the Catholic faith were enough to take her to the heights of sanctity and the gift of herself for her country and her Lord. She listened to the Lord’s voice as He spoke to her through the saints and through circumstances, and she obeyed His will unflinchingly. St. Michael the Archangel addressed her as “Jehanne the Maid, Child of God,” for this is what she was and always remained. Instead of allowing herself to be distracted by worldly motivations, she followed the path God set for her, in spite of its difficulty. She is, in other words, the exact antithesis of churchmen today who would water down the demands of God’s law, the necessity of self-denial in adhering to it, and the supernatural motives that should sustain us.

Second, Joan boldly stepped into a public role at God’s behest, but without losing her femininity. She did not wage war with the soldiers, but simply led them in formation. She would not, in principle, kill or wound anyone. There is not the remotest chance that she would ever condone women fighting in the military and being trained to kill — the absurdity of actual or potential nurturers of life taking it voluntarily. In this, she is an example of true Christian womanhood: strong and courageous, willing to stick her neck out, willing to lead (as she herself was willing to be led by her Master), but not stupidly trying to be a man. She did not think equality with maleness as something to be grasped, but emptied herself and became a servant. In this way she provided an example of being true to her identity and vocation that is resoundingly necessary for both women and men to heed in a world that has become confused about how many sexes there are and who belongs to which “division” of the human race.

(And it is indeed a division — but it need not be an opposition or antagonism, in the way that both male chauvinism and feminism imagine it to be, each feeding off the other. Real difference makes possible a deeper communion and cooperation than uniformity and replaceability, even as, in the Church, the priest’s role as mediator is seen to be essentially different from that of the laity, since he acts on their behalf in persona Christi capitis, in the person of Christ the Head of the Church. In a similar way, the husband in a family has the calling to imitate and represent the headship of Christ. As St. Paul explained so well, one cannot have a functional organic body if it’s made up only of arms or hands or eyes or, for that matter, heads. Real difference and distinction, when embraced in a spirit of servanthood, confer a mutual benefit that far exceeds what one could obtain independently. Hierarchy and unity are correlative, not opposed, as democracy falsely assumes.)

Third, Joan is a model of the virtues of chastity and purity. Feminists like to point out that she donned a man’s clothing at a time when this was considered immoral. Yet all historians are agreed that the reason Joan wore a man’s clothing during her public service, and later in prison, was to protect herself against the danger of rape from the soldiers and enemies among whom she had to dwell. The ordinary women’s clothing of the time offered no such defense, and she would not have had the leisure or the talent to create a new and better fashion de novo. She complained to the tribunal that an English lord had attempted to violate her in prison. Like St. Maria Goretti, St. Joan prized the gift of her virginity and defended it. She knew her worth and her dignity as a woman and a human being.

Fourth, Joan was condemned by an ecclesiastical kangaroo court presided over by a corrupt bishop, Pierre Cauchon, with the complicity of corrupt clergy. As everyone knows who has read Joan’s life, she was falsely charged with heresy and condemned to be burnt at the stake. The trial was later re-evaluated by the Church and found to be gravely defective and irregular on numerous counts — indeed, not to mince words, it was a wicked sham, an excuse for murdering an inconvenient and too popular figure who could not be readily controlled by those in power. We live today in a world in which most of episcopacy is corrupt on several levels — doctrinally, through failing to teach the Catholic Faith in its integrity, if not positively adhering to modernist views, or morally, due to practicing sexual abuse, or covering it up, or tolerating its existence, or liturgically, by refusing to model right worship or to correct impious deviations, or, indeed, all three at once. Joan sets us an example of a laywoman who refuses to be cowed by threats and intimidations from “authority,” even legitimate authority abusing its powers, and who would rather die for a right conscience than falsely admit to wrongdoing. She ought to be recognized as the patron saint of those who have been victimized by the Church’s hierarchy.

St. Joan of Arc, the Maid of Orléans, patroness of France, pray for us.