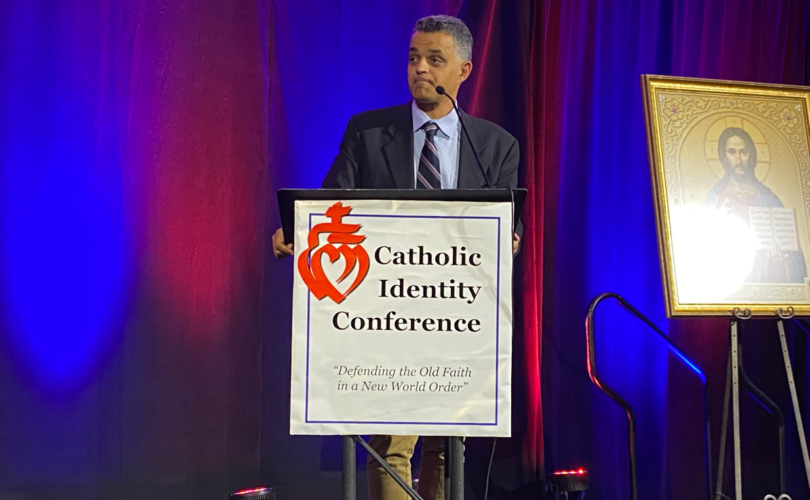 (LifeSiteNews) – Today at the Catholic Identity Conference I delivered a speech outlining a call of resistance to Pope Francis on behalf of our supporters and confreres in this crusade to resist the onset of the New World Order. Sadly, our Holy Father has acted much like a pawn or even a leader of a global movement to make the “new normal” a permanent reality.

Those of us at outlets like LifeSiteNews and The Remnant have been engaged in this controversial yet necessary fight for truth and true religion for years, even more so as the errors and dangers of Pope Francis’ pontificate have become increasingly more evident.

From the very first moment of this pontificate in 2013, there was scandal.

On the balcony at his proclamation, Francis was accompanied by none other than the dissident cardinal, Godfried Danneels. The same Danneels who reportedly encouraged the Belgian King to legalize abortion, and has openly admitted to being part of the clerical “mafia” that plotted Francis’ election.

In 2016, Cardinal Burke remarked in the wake of Francis’ controversial exhortation Amoris Laetitia that he was particularly concerned that “there are those who refer to the objective reality of the grace of marriage as merely an ideal to which we more or less seek to conform ourselves.”

This statement was of course in response to the doctrinal bomb found in the footnotes of the pope’s document which seemed to change unchangeable Church teaching on divorce and remarriage.

But Burke called on us to “resist” the temptation to accept novelties that contradict tradition, no matter the source.

That is why we can say here with full confidence and no fear, that we, as faithful Catholics, have a duty before God to resist the attempts to undermine defined dogma on moral questions which are being relentlessly attacked by faithless globalists, Vatican bureaucrats and even by Francis himself.

In 2021, Pope Francis addressed the World Bank and the International Monetary Fund at their spring meeting, calling for “global governance” in light of COVID-19, pushing strongly for “universal vaccines.”

In a book-length interview in the same year titled, “God and the world to come,” Francis called for the creation of “a new world order,” echoing the sentiments of the World Economic Forum’s Klaus Schwab who pines for a global technocratic “Great Reset” as capitalism.

To this end, Pope Francis has launched his own “Global education pact” with the United Nations and with various globalist corporations, in order to promote a new “economic system” of capitalism and to ensure the achievement of the UN’s Sustainable Development Goals (SDGs). Amongst other aspects, the partnerships promote “sustainable lifestyles,” “gender equality,” and “global citizenship,” while the SDGs themselves promote “sexual and reproductive health services,” which as we know, is euphemistic language for abortion and contraception.

While happily inviting “transgendered” individuals to speak with him in Rome, Francis has sadly denied to meet with or intervene on behalf of Cardinal Joseph Zen, who is being endlessly persecuted by the communist Chinese authorities.

He has cozied up with depopulation fanatics like Jeffrey Sachs, and has seemingly endorsed the use of contraception to prevent pregnancy in regions with the Zika virus, causing both confusion and scandal to those trying to defend the orthodoxy of the magisterial tradition of the Church.

Of course, there too is the pachamama debacle that took place in 2019 at the Amazonian Synod, when a demonic idol was processed into the heart of the Vatican.

Francis was also regrettably at the forefront of the COVID agenda, supporting the criminal lockdowns and mass vaccination campaigns that have led to untold consequences that far outweigh the harm caused by the virus itself.

Finally, and most recently, bishops – the successors of the Apostles – of the Catholic Church, including Bishop Joseph Strickland and Bishop Athanasius Schneider, issued a formal correction relating to heresy found in Francis’ June letter, Desiderio Desideravi.

We, the faithful, must continue to pray fervently for Francis. We love him enough to call him out, and it is because of this love that we must call him out frankly and encourage his brothers in the episcopate to do the same. For our sake, for the sake of our children, and for Pope Francis’ own soul – we must resist.