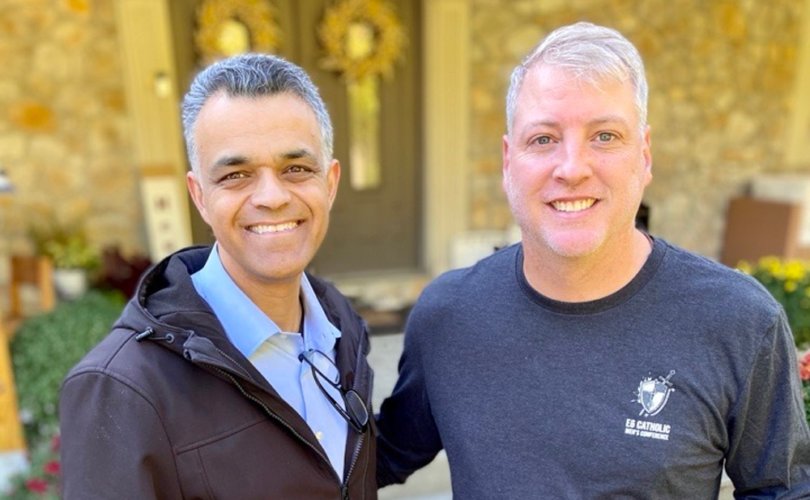 (LifeSiteNews) — Today I had the tremendously beautiful opportunity to meet and pray with Mark Houck, the pro-life Catholic father of seven who was arrested in front of his family by the Biden administration’s FBI stormtroopers last month.

Getting to meet the Houcks in person was incredible. I’d never met them before, but had seen Mark’s talks for his organization The King’s Men, which helps men live lives of virtue. It’s beautiful evangelism.

Mark has such a big heart. Though I’d never met him, as soon as I arrived he came up and gave me a hug like we were long-lost brothers. In fact we are, because we’re brothers in Christ.

It was such a blessing to meet with this godly, courageous man and his beautiful family, who have been cruelly targeted and harassed by the pro-death Biden regime’s federal law enforcement.

Mark and I prayed the rosary together, and I spent a beautiful time with him and his amazing family. They’ve all suffered so much, but I know that suffering will bear a lot of fruit for God’s glory.

During my time with the Houcks, I could understand why Mark’s wife Ryan-Marie, in an interview with Fox News host Tucker Carlson late last month, described the FBI arrest of her husband as “devastating.”

I got to meet the family’s seven beautiful children, who Ryan-Marie told LifeSite reporter Patrick Delaney have been “traumatized” by the FBI’s uncalled-for arrest of their father. It’s heartbreaking to think that such innocent young children should have had to experience the terror of that day.

Being in the family’s home I could picture the FBI agents surrounding the family home that day, as Ryan-Marie described to Delaney in our report last month. I could see where the family’s innocent children stood at the top of the stairs watching the dozens of heavily-armed FBI agents behaving like a SWAT team as they swept through the house with their guns drawn.

What on earth were they expecting? It must have felt surreal.

These are people of prayer. They have images of Our Lord and Our Lady and crucifixes all throughout the house.

As Ryan-Marie recounted in our previous reports, Biden’s FBI goons wouldn’t even let Mark get dressed before dragging him away from his home. He was gone before his wife could even bring him the sweater and rosaries he had asked her to bring.

It was just a nightmare.

This might be the beginning of a dark time, as the Biden administration seems adamant to continue using its law enforcement muscle to crack down on pro-life moms and dads just like you and me.

— Article continues below Petition —
Stand with pro-life Catholic dad of 7 raided by Joe Biden's FBI
Show Petition Text
6783 have signed the petition.
Let's get to 7500!
Thank you for signing this petition!
Add your signature:
Show Petition Text

Let’s not forget, Joe Biden himself suggested pro-lifers posed an existential threat to the “very foundations of” America in his ghastly speech in front of Independence Hall last month. It seems like with the FBI’s raid on Mark, Biden is deliberately going after the God-fearing people he’s decided are his enemies.

But I can tell you, the courage of Mark Houck and his family is already bearing fruit. His kids are proud of their dad, and they know this is all part of the battle.

Just this week, a couple announced in a touching video that they chose life for their preborn baby thanks to Mark’s fearless ministry.

I pray that Houck’s family and all of us, will always hearken back to the example Mark has set whenever we’re tempted to do something amiss from God’s plan in our own lives.

In his suffering and persecution, Mark has shown what it means to be a true Christian. I invite you all to pray for him and his beautiful family.