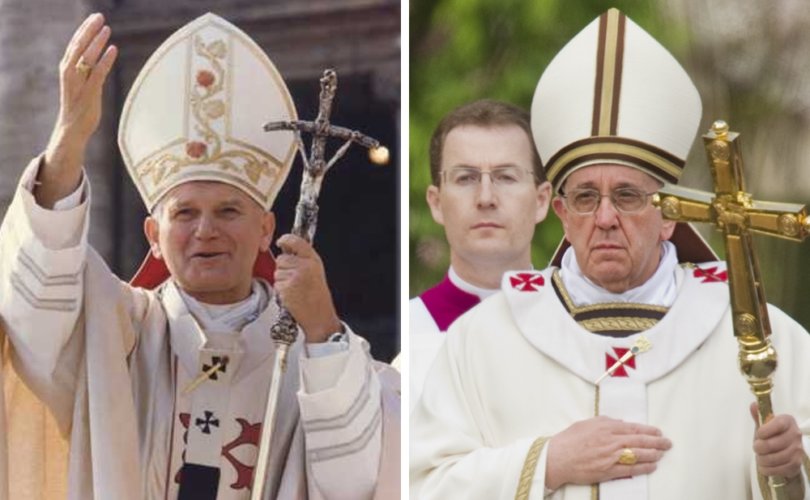 BUENOS AIRES, June 20, 2018 (LifeSiteNews) – Last Thursday the lower house of Argentina’s Congress voted to make abortion-on-demand legal to 14 weeks. Now the bill has been passed to the Senate for its own vote.

Silent on Ireland’s abortion referendum, will Pope Francis speak directly to the Senate of his birth country?

Unlike Ireland’s shameful result, this vote was a squeaker: 129 members voting for the new bill and 125 voting against. Indeed, until three Argentinian lawmakers changed their minds late into the debate, it looked as though the right-to-life of the unborn would triumph. When the debate is so divisive, every vote is crucial. What can be done or said to convince the majority of Argentina’s senators to vote for life?

Media in Argentina fishing for a comment from the Pope on the abortion legislation in his homeland interpreted a vague reference to defending “life and justice” to his stance on the bill, but there was no indication or mention of the bill whatsoever.

The letter was an acknowledgment of congratulations he had been sent from Argentina for his fifth anniversary of being elected Pope. In the letter, Francis revealed that he still loved his country and prayed for it every day. He asked forgiveness of anyone who had been offended by any of his “gestures” and encouraged his countrymen to rejoice over things he did well and to “feel them as your own.”

“You are my people, the people who have trained me, prepared me and offered me to serve people,” he wrote.

His letter concluded: “I ask for all of you to be channels of good and beauty, so that you can make your contribution in the defence of life and justice… to improve the world with your work [and] to take care of the weakest.”

Yes, well. Having just returned from a visit to friends in Kraków, I wonder what would have happened in Poland had a former Archbishop of Kraków, later known as Pope John Paul II, had been just as vague about Poland’s struggle to free itself from an oppressive communist regime.

After his 1984 tour of Canada, John Paul II told reporters that “the church cannot be involved in politics as such, but the church has a duty to express itself–herself–in all moral problems and developments.” He had, of course, also spoken out for the right-to-life of the unborn while he was in Canada, calling abortion ‘an unspeakable crime against human life which rejects and kills life at its beginning.’

But it was his visits to his own native country as pope that changed history. When in 1979, the new John Paul 2 made his first “pilgrimage” to Poland, then in the grip of the atheist Communist Party, he spoke boldly about the relationship of the dignity of man to Christ:

In a later trip, in 1987, when hope in the banned Solidarity movement was waning, John Paul gave a homily on—solidarity. In the teeth of government oppression, he told over a million Polish workers gathered in Gdansk for an outdoor Mass that “there cannot be a struggle more powerful than solidarity. There cannot be an agenda for struggle above the agenda of solidarity.”

To return to modern-day Argentina, the New York Times has opined that its Senate is conservative and that it is less likely that the lower house to support the pro-abortion bill.

It is safe to say that a strongly-worded plea for the preborn from Pope Francis will fall upon ears more willing to hear than the ears of the communist Polish government were to hear the teachings of John Paul II.

There is, shall we say, a strong precedent for contemporary popes making strong statements to and on behalf of their nations.

In 2000, Poland’s Czesław Miłosz, a winner of the Nobel Prize for Literature, published the following poem about John Paul II.  According to scholar Paweł Rojek, Miłosz was wary of nationalist and “theocratic” elements in John Paul’s work. Nevertheless, the poet paid the pope the following tribute:

We come to you, men of weak faith,
So that you might fortify us with the example of your life
And liberate us from anxiety
About tomorrow and next year. Your twentieth century
Was made famous by the names of powerful tyrants
And by the annihilation of their rapacious states.
You knew it must happen. You taught hope:
For only Christ is the lord and master of history.

How wonderful if one day a leading Argentine poet could justly honor Pope Francis for protecting women and their preborn children from the powerful and rapacious pro-abortion lobby.