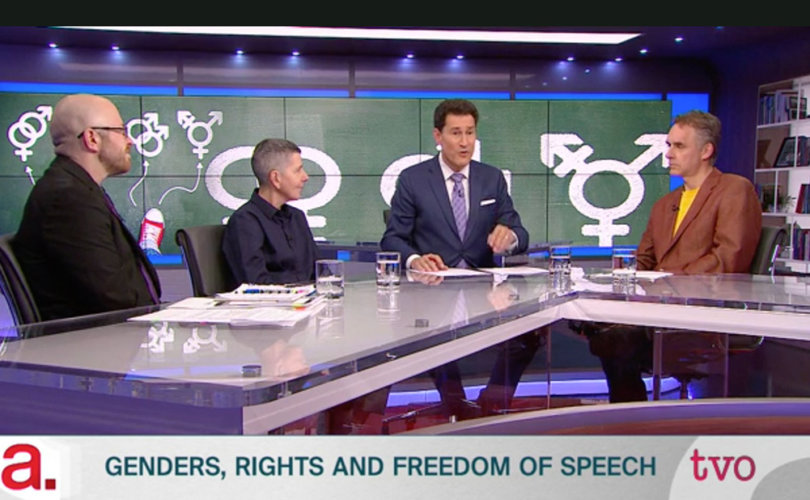 The audio-recorded assault on Shepherd was so extreme that many national and international media reported on the demonization of the tutorial leader for merely challenging her students to consider two sides of the raging gender issue. See the Toronto Star, Global News, CBC, CTV News, The Globe and Mail,  Toronto Sun, Macleans magazine, The Daily Telegraph of Australia, Huffington Post, Buzzfeed and two of the best – The Spectator in the UK and Christie Blatchford in the National Post.

The National Post’s Rex Murphy is one of Canada's most perceptive columnists and a rare guru of reason in Canada's uniformally liberal news media culture. In his column on the Wilfred Laurier mind control atrocity, Murphy starts out by writing, “These are dark days in Ontario.”

Murphy, like Peterson, is never afraid to call things as they truly are, hence his uniquely crafted articles are a welcome relief from the banality or mendacity of far too many Canadian journalists.

The crisis emerged from the consideration that the (television) fragment chosen included both of the antagonists. If she had just shown the gentleman arguing for the inflation of pronoun usage, Matte, I hazard she would have been safe. Perhaps even up for a teaching award. Poor Shepherd’s flaw was that she showed a segment from the exchange, serenely moderated as always by Steve Paikin, which also featured the person who Matte was debating, the aforesaid Peterson.

Peterson on Pronouns is a crimson cape to a charging bull for the social justice warrior class. They view him as Atilla the Grammarian.

Professor Jordan Peterson, for those who are not yet aware of this rising intellectual superstar, has been an extremely outspoken, secular prophet warning society about the dangers it faces from today’s power-drunk sexual ideologues and accompanying fascist language police.

A Nov. 4, 2016 LifeSite article explained the daring of Peterson on that Agenda television program from which Lindsay Shepherd extracted those three minutes:

For anyone who has doubts about the totalitarian tendencies of the radical left, and in particular the creeping dictatorship of gender-rights ideology, this program is a must-see. On Oct. 26th, Dr. Jordan Peterson appeared on The Agenda with Steve Paikin, and defended himself valiantly against three gender-rights activists. He was asserting his right to stick to the English language rather than adopting the various newly-minted personal pronouns, like xe, thon, zer and a singluar 'they', to refer to those who identify with a multitude of alternative gender identities. At the present time, Bill C-16 threatens to make it a violation of human rights for anyone to refuse to use these pronouns. The Agenda debate paints a very disturbing portrait of the intolerant and anti-truth society that is descending upon us

Be sure to read the entire article, especially given how especially influential Professor Peterson has become since then.

Rex Murphy also has some mighty words to say of Peterson,

Peterson (who may someday own YouTube, such has been his explosive presence on that medium) has been challenging some of the regnant dogmas of the present day university, exercising an almost Socratic skepticism towards a whole basket of its most dearly loved and lavishly unquestioned progressive practices and preachments. He is living the role—as I wrote once earlier in the Post—of a real university professor. As such, he is denoted an academic pariah by those he discomforts.

Murphy berates one of the Wilfred Laurier inquisitors for his vicious assault on Ms. Shepherd.  He questions whether any of us could ever have imagined that playing a clip from the always civilized Agenda program “would have a professor at a serious university, seriously asserting, it was equivalent to blasting Adolph Hitler in full frothing rage at a Nuremberg rally—neutrally or otherwise? “

The Post's sage ends with a question that any sane, thinking person would ask after having been made aware of any of these on-going travesties at today’s universities,

“…how long are the humanities programs of so many universities going to oblige the anti-intellectualism, heresy hunting, and ridiculous hyper-reactions of immature and overzealous students and their allies in faculty positions?”

It is time for a revolution. Enough is enough.

These crazed or perhaps just corrupted and cowardly institutions receive the vast majority of their billions from our taxes. All citizens are being taxed to pay for student ideological indoctrination and the destruction of what is left of our civilization.

Out with the frauds, cultural and economic Marxists, super egotists, ultra-sensitive, pathetic snowflakes!

Let’s start afresh with true “diversity”, true education, genuine “dialogue” and personal discipline and respect for freedom of speech without which no free society can be possible.

For those who still don't see the problem

If some who read this article still do not see the severity of the problem then let me quote below something from the New Testament that likely explains why you don't get it. It would also be very helpful to refer to Allan Bloom's revealing, best-selling 1987 book, The Closing of the American Mind, discussed in a more current context here by Nathan Schlueter.

This all has to do with the closed-mindedness or narrow-mindedness that develops within people whose consciences become numbed, as self protection, from their on-going deviant behaviour and/or their total rejection of authentic (as opposed to pagan or highly selective) religious belief and practice. Another factor, related to the preceding is the negatives affects of modern culture on conscience and critical thinking ability.

For several years in my life I held opposite views from those I have now. Then, during one weekend, I experienced a dramatic conversion back to my Catholic faith.

The conversion led to an astonishing result. You might say that scales fell from my eyes and I suddenly became far more open-minded and able to comprehend that the other side to my distorted previous beliefs were not only reasonable, but shockingly far more accurate than I could ever have imagined. I had previously been closed-minded to these possibilities.  I became angry about how I had allowed myself to be manipulated and lied to at university and how harmful that had been to my personal life.

Here are the verses that can help us understand why what is so very obvious to some, is not at all understood or accepted by others:

13 The reason I speak to them in parables is that ‘seeing they do not perceive, and hearing they do not listen, nor do they understand.’ 14 With them indeed is fulfilled the prophecy of Isaiah that says:

16 But blessed are your eyes, for they see, and your ears, for they hear. 17 Truly I tell you, many prophets and righteous people longed to see what you see, but did not see it, and to hear what you hear, but did not hear it.

The sexual revolutionaries are now overreaching to such an extent that the dangerous totalitarian impulse of their deviant agendas has become obvious.

There is the wise old saying, “Give them enough rope and they will hang themselves.” And that certainly now seems to be happening in numerous colleges and universities.