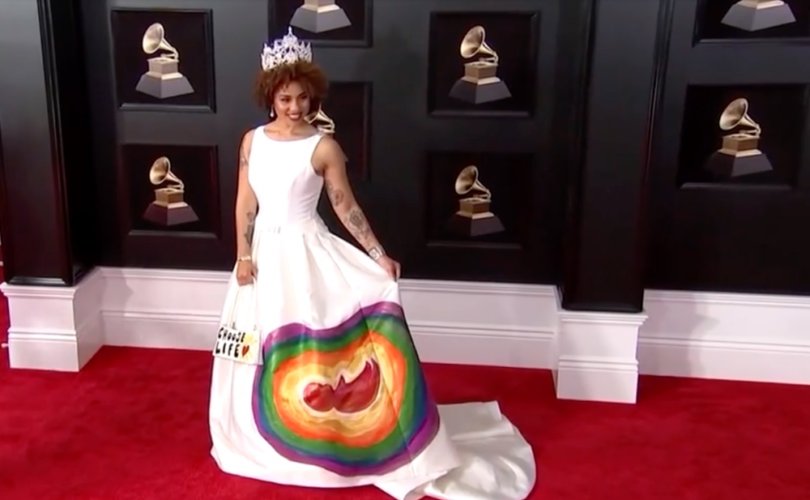 Joy Villa wears a pro-life dress to the 2018 Grammys. Inside Edition / screen-grab

January 29, 2018 (LifeSiteNews) – Singer and songwriter Joy Villa wore a dress showing a pre-born baby in utero to the Grammys yesterday and carried a purse that said “Choose Life.”

“This is a message that needs to get out,” she told Fox Business. “There’s a lot of young girls out there who don’t know adoption is an option. And I’m not putting, uh, you know, any hate against other people who choose other ways, but I’m personally pro-life and I think that needs to be represented in an area that’s frankly hostile…”

.@Joy_Villa on pro-life dress criticism: “It makes me keep going. If you tell me 'stop, go away,' I want to do it even more because this is a message that needs to get out.” pic.twitter.com/wvwSxOwChq

Villa said the image of the baby on her dress was recreated from one she painted ten years ago.

“I chose to represent a choose life, pro-life message on the Grammys red carpet,” she said. And “at the Grammys actually, I had a lot of people tell me it’s beautiful. They wanted to hear my story. I told them that I had given a child up for adoption 10 years ago. That was my choice, and that’s why I’m pro-life.”

.@Joy_Villa on pro-life dress reaction: “Social media, a lot of people are hating on me right now, but at the #Grammys actually I had a lot of people tell me it's beautiful, they wanted to hear my story.” pic.twitter.com/Sx8uUVKlom

Last year, Villa wore a pro-Trump “Make America Great Again” dress to the Grammys. Her pro-life and pro-Trump dresses are significantly more modest than dresses she’s worn in past years, such as one made of construction netting and another of fabric spikes.

Villa’s pro-life dress brought attention to the human rights issue of abortion in a very creative way. How many more people have thought about the humanity of babies in the womb thanks to her dress and all the headlines about it? How many Hollywood celebrities were forced to think about abortion in a new way? How many pro-lifers in Hollywood realized they’re not alone and perhaps were given more courage to speak out because of this?

The more unique ways the pro-life message is shared, the better.

“The fact that Villa is a card-carrying and enthusiastic Scientologist is the second red flag for conservatives cheering her ensemble and potential candidacy (the first being her naked ambition for political office, which is always its own warning sign),” Mandel wrote. “Scientology is famous for many things, or it should be at least, and one of them is its reputation for allegedly forcing its members to obtain abortions when they work for its management arm the Sea Org.”

“Those in the Sea Org work long hours for little pay; and introducing a baby into the lives of its members would greatly decrease their productivity and worth; and thus, having a baby while a member (signed onto a 10,000 year contract) is banned,” Mandel explained. “Those who find themselves pregnant are reportedly given a choice: abortion or departure from one’s job, family and home. Even those who choose the latter are still allegedly coerced into getting an abortion.”

The Church of Scientology “has been the subject of lawsuits and controversy about the practice of forced abortion previously.” It “should be a target for pro-life activists,” wrote Mandel. “We decry how authoritarian regimes in China and North Korea force its mothers to abort their babies; and we should be utilizing all of our resources to stop a so-called religion from doing it here in the United States.”

I’d like to invite Joy to the March for Life and Nellie Gray Mass after it next year. Joy, we can talk about your story of choosing adoption. You can see the hundreds of thousands of young people who travel from all over the country to protest abortion.

Dear @Joy_Villa, will you please come to the #MarchforLife next year and the Nellie Gray Mass afterwards? There are many in the #prolife movement who'd like to meet you. And I would love to personally bring you to the Nellie Gray Mass to introduce you to young pro-life Catholics!

I pray you accept my offer so that, most importantly, you can experience the beauty of a Traditional Catholic Mass.