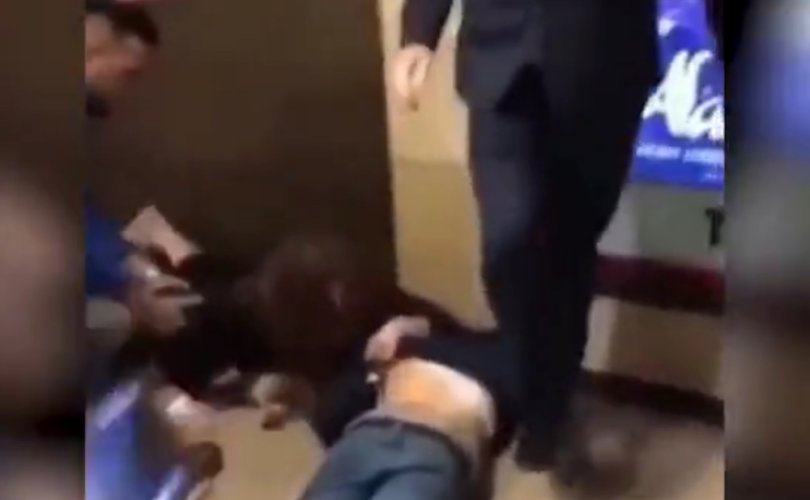 Al Shaheeb, lying on the ground, was 'drop-kicked,' 'booted,' and 'stamped' on for telling the males they lacked female parts.Instagram / thestreetblogs

November 20, 2020 (LifeSiteNews) – One of my more unpopular observations is that despite progressives claiming the mantle of diversity and inclusion and conservatives being typecast as bigots, the majority of those who hold socially conservative views are actually non-white (and often immigrants.) This is true in Canada, it is increasingly true in the United States, and in the U.K., the Church of England is attempting to find creative ways to affirm transgenderism while imams demand that public schools stop indoctrinating their children on LGBT issues.

Thus, one of the ironies of identity politics is that LGBT activists and socially conservative minorities often vote for the same politicians in weird coalitions of inconvenience (which, as I noted in The American Conservative last week, could easily collapse if an economically liberal and socially conservative option presented itself.) Progressives who call social conservatives bigots seem unaware that the same accusation applies to their own immigrant voters, who for religious, cultural, or common sense reasons have not followed their largely white counterparts down the rabbit hole.

The clash between the growing intolerance of the LGBT movement and immigrants was encapsulated this week by a bizarre story in the Daily Mail about a vicious assault by a “gang of drunken transgender women who stamped on a teenager outside a Tube station.” The victim of the attack, a 19-year-old named Al Shaheeb, had apparently gotten into a verbal altercation in the early morning hours of June 24, 2018 with three people (the aforementioned “gang of drunken transgender women”). He pointed out to one of them that “You’re not a woman – you need a fanny to be a woman.” In other words, the teen pointed out that the males dressed as women actually have no female genitalia.

This statement of fact resulted in the teen first getting “drop-kicked,” “booted,” and “stamped” on. After the beating, he was taken to the hospital, and during the recent trial of the transgender thugs, the Inner London Court heard that he had “severe abrasions and a black eye.”

In sentencing the four brawlers — three got a six-month curfew between 9 p.m. and 7 a.m., and the fourth got a conditional two-year discharge — Judge Nigel Seed then “told the gang” that he sympathized with their motives.

“The four of you … were subjected to extremely transphobic and racial abuse. Had it not been for that there would have been no violent disorder,” he stated. “However, that does not excuse what you did, you went too far in your reactions — but, of course, transphobic issues are particularly sensitive … I do not in any way condone your behavior, but I accept that what happened to you at the beginning of the incident was entirely wrong and people like you should not be subject to that abuse in the public domain or anywhere.”

Now, I accept that this teenager spoke the right words but likely at the wrong time and place. Considering the time of the altercation, he was probably drunk. But a British judge telling a group of thugs who kicked and stomped a teen into the pavement for telling biological men that actual women have female genitalia — that is ridiculous. The judge didn’t let them off scot-free, fortunately, but essentially told them that their rage was merely a slight overreaction to something self-evidently offensive.

The reality is that the progressive worldview is more than simply post-Christian now. It is an alternative reality in which one must suspend belief in basic biology, ignore what their eyes tell them, and place their faith in an ever-evolving ideology rather than common sense and the wisdom of millennia. Those arriving in the West are not only meeting different faiths (or, more often, a lack thereof) but an entirely different way of looking at the world. That is far more than a culture shock. These are disagreements about the basic premises not only of society but of fundamental facts about who we are and how we understand being human.