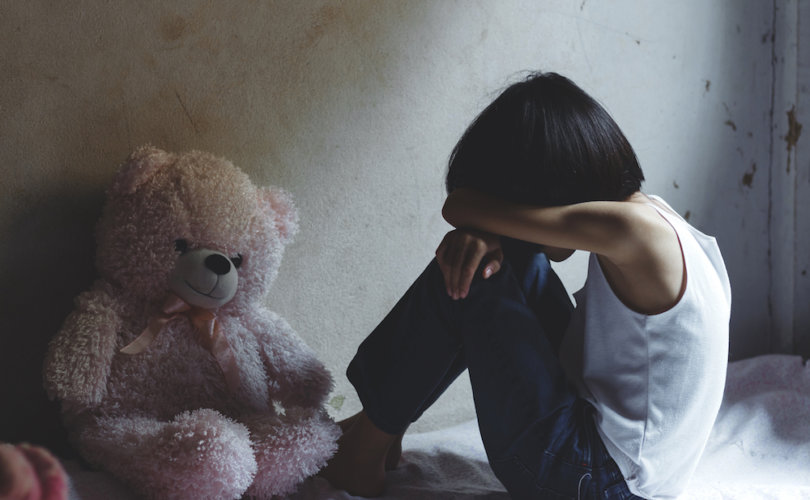 The details are too graphic for me to include here, but the story is this: A 44-year-old man sexually abused his two and three-year old adopted daughters many times, beginning when they were infants. He turned himself in to police when one of his daughters made an off-hand comment about the abuse to her mother. “A pornography addiction may have been the red flag for a rural Saskatchewan man who started abusing his daughters without empathy,” the Star Phoenix reported.

Pornography, the reporter noted, twisted this man from a normal person into a perverse sex offender: “The Court heard the man had been living a double life of an accomplished health-care professional and loving father, and a selfish addict controlled by lust.” This is true of many men in our culture, regardless of whether most of them decide to act out on or imitate the sorts of things they watch on-screen. “Women, and eventually my girls, became faceless,” the man told the court just prior to being sentenced to prison for six years. “Eventually, I crossed the last line.”

The sentence he gave his daughters is also life-long.

Most people remain unaware that pornography is not only a huge driver of sexual assault, but also plays a key role in the abuse of children. When I asked Matt Osborne of Operation Underground Railroad about the connection between porn and child abuse in an interview, he began murmuring in agreement before I could even finish my question. Operation Underground Railroad is an American organization that assists law enforcement officials around the world in breaking up human trafficking rings and rescuing sex slaves, with their operatives going undercover to pose as American sex tourists in shorts and flip-flops to lure human traffickers into revealing their brutal business.

“Then he also realized that he needed to physically have forceful sex with these kids, rape them—he’s admitting this to us,” Osborne told me. “And then he actually got in to making pornography. So you see this whole spectrum here—the ‘harmless’ magazine all the way to having to make pornography. Then some of the American would-be sex buyers we helped to arrest with the Department of Homeland Security, they admitted to us that again, they started with what they thought was harmless pornography and then it got to the point where they actually had to travel to locations to have sex with kids. A couple of them told us, ‘I don’t think I would be here if it wasn’t for pornography.’”

Bluntly put: Pornography is a cultural poison with countless victims, and these victims are largely ignored because “sexual liberation” demands that we never critique someone’s sexual interests—even if that happens to be watching violence being inflicted on women and girls for pleasure. This is a sick and disgusting state of affairs, and it is long past time for us to have an open and honest discussion about what pornography tells us about ourselves, both individually and collectively. It is time for us to take the advice of Langston Hughes:

I am so tired of waiting,
Aren’t you,
For the world to become good
And beautiful and kind?
Let us take a knife
And cut the world in two—
And see what worms are eating
At the rind.