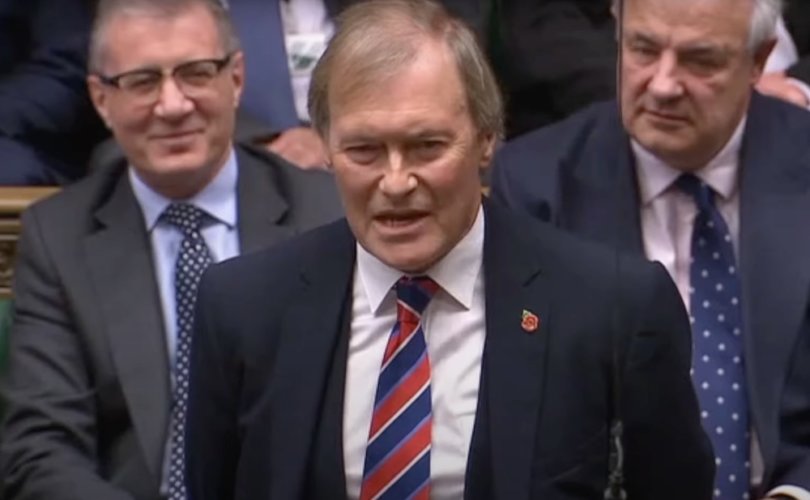 Catholic politician Sir David Amess, was tragically stabbed to death on October 15 and died without receiving the Last Ritesscreenshot

(LifeSiteNews) – It is reported that Father Jeffrey Woolnough, a Catholic priest who tried but failed to give the Last Rites to Sir Davis Amess, a British Member of Parliament stabbed seventeen times by an Islamic extremist, has quit social media because of criticisms being made of him.

He was refused entry to the scene because, the police officer in charge said, it was a “crime scene”. The BBC quotes his explanation:

“Most people have been so kind with messages of support, others have accused me of capitulating at the scene,” he said.

“The police have a job to do. When I say I have to respect it, it doesn’t mean I agree with it.

“But I have to respect as a law-abiding citizen that the police would not allow me in and I had to find plan B, and plan B for me was prayer, and I had to pray on the spot, pray on the rosary.”

There are two things about this story which Father Woolnough thought worthy of remark, which are in fact entirely predictable.

One is that many Catholics were extremely upset by the thought that a priest was refused access to a dying man — in this case a Parliamentarian well known as a Catholic — and that they would hope that a priest in that situation would move heaven and earth to overturn the police decision.

The other is that when Father Woolnough subsequently sought reassurance from what he amusingly calls “some really top priests in the hierarchy”, they told him he “did the right thing”. Of course they did: and this is very much part of the problem.

It may well be that there was nothing Father Woolnough could have done about the situation, and he made a judgement that that this was so. Again, the social media criticism may well fall short of the respect due to him as a priest.

Father Woolnough says he doesn’t necessarily agree with the police decision, but that he “accepts” it. He seems determined not to criticize the police. But couldn’t such criticism perhaps be constructive? Could it not help them do their difficult job more effectively? Especially if, as I expect, the decision in this case was based on religious illiteracy, rather than malice.

It has now been proposed by another Member of Parliament that the ability of priests to minister to the dying be enshrined in law. This proposal has been welcomed by, among others, Bishop Philip Egan of Portsmouth.

It is not long past in the collective memory that we could only receive spiritual care thanks to quite heroic efforts by the clergy and the laity who helped them. My favorite example is the group of priests who broke, not out of, but into, York prison, and managed to celebrate three Solemn Masses (with deacon and subdeacon) back-to-back, for the Catholic prisoners, in the 16th century. But considerable determination and force of character was necessary to serve Catholics is prisons, hospitals, and in the army, in quite recent times, and indeed sometimes up to the present.

In Monsignor Hugh Benson’s apocalyptic book Lord of the World, the main character has to talk his way in to a private home to respond to a request by a dying woman to be reconciled to the Church, and then has to face the wrath of her son and daughter in law. What he describes is the result of merely social hostility to the Faith. The story is set in the early decades of the 21st century, but this kind of situation was perfectly familiar to priests when he was writing it a hundred years ago. It is what good priests did, even if it made them unpopular with the authorities.

Even the more heroic efforts do not always meet with success. But it is essential, if the faithful are to have confidence in their pastors, to know that they will go into battle on our behalf when it really matters. Clerical abuse scandals and debates about COVID restrictions and vaccines have undermined the sense of many Catholics that our pastors instinctively put the spiritual good of the people ahead of other considerations. The debate about the Last Rites would be a good place to start a counter-narrative. We need shepherds willing to lay down their lives for their sheep.