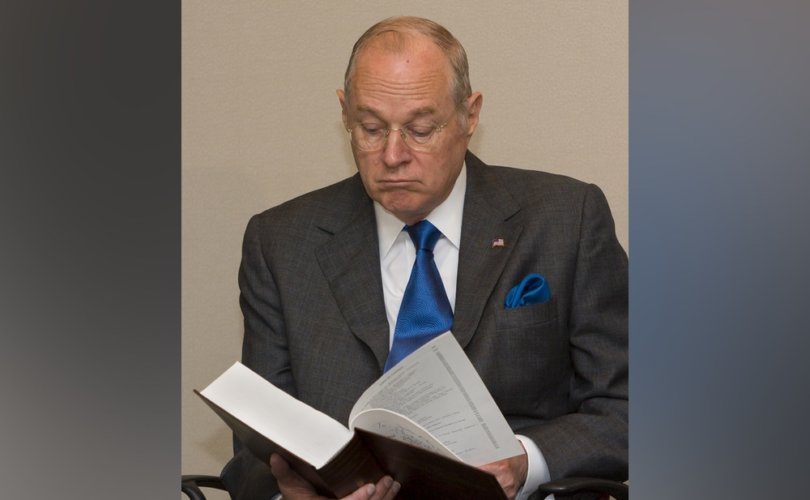 Marriage activists, as well as a few ex-gays — myself included — stood outside the court to publicly speak out about that tragic ruling.  I singled out only one justice in my remarks: Anthony Kennedy.

Kennedy was the swing vote in the Obergefell decision, allowing the peculiar notion of same-sex “marriage” to skate through on the thinnest of margins: 5-4.

Had he voted the other way, the attacks on religious freedom which have become commonplace today would most likely not be so vicious.  Kennedy’s opinion unleashed the LGBT world to vent its vitriolic anger against those who disagree with them.  And the toll on the soul of this country over the last three years has been saddening, demoralizing, divisive.

Jack Phillips of Masterpiece Cake Shop would not have had to defend his decision to decline to bake a cake for a gay couple all the way back to the Supreme Court.  Nor would florist Barronelle Stutzman, whose fate still hangs in the balance after declining to arrange flowers for a gay couple.  Nor would countless other florists, bakers, photographers, videographers, tee shirt makers and even orchard owners.

Overnight, Kennedy’s vote in favor of ‘gay marriage’ turned good citizens into targets; It turned law-abiding people who strive to live according to their faith and to their conscience into criminals, often savaged by mainstream media.

As a same-sex attracted man who also strives to live according to my Catholic faith, I stood in front of the Supreme Court yesterday and declared Kennedy’s majority opinion in the Obergefell case was “flat out wrong.”

Although appointed by a Republican President — Ronald Reagan — Kennedy surprisingly went with the far-left on important decisions regarding the social issues, producing the net effect of unraveling the social fabric of our nation, while coarsening popular culture against Christians.  Kennedy was never really a Conservative; he is a Libertarian.

He was reliably conservative on issues dealing with the size and reach of government, but Kennedy made radical departures from conservative thought––and more importantly, his Catholic faith––when it came to the most consequential of matters put before the court:  Abortion, and LGBT ‘rights.’

In Lawrence v. Texas (2003), Kennedy was instrumental in striking down the Lone Star State’s law against sodomy, which effectively neutered similar laws in other states.  While this seemed to many like nothing more than disposing of an antiquated law, the reality is that this was the first of several steps––leaps––toward the establishment of same-sex marriage and the simultaneous erosion of religious liberty.

As if to prove Kennedy’s bona fides, Libertarian Reason.com noted:

Kennedy also vigorously defended the underlying validity of the court’s tragic 1973 Roe v. Wade decision throughout his career on the bench.

In Planned Parenthood v Casey (1992), Kennedy was part of a 5-4 majority, which wrote, “At the heart of liberty is the right to define one's own concept of existence, of the universe, and of the mystery of human life.”  A more galling declaration of moral relativism has never been authored by the nation’s highest court.

Moments after the Supreme Court issued Kennedy’s retirement announcement, Judge Andrew Napolitano said, “The key issue will be abortion. Even though Justice Kennedy is Roman Catholic, and was appointed by Ronald Reagan, he has consistently sided with the liberals on abortion.”

“If President Trump nominates a pro-life nominee, you will see a titanic battle in the Senate and throughout the country, because that will create a pro-life majority on the Supreme Court.”

After Kennedy let it be known he is stepping down, National Review noted, “Kennedy’s retirement, effective July 31, will set up a high-stakes political battle over his replacement’s nomination.”

And with good reason.  If President Trump, with the help of the U.S. Senate, successfully installs another nominee in the mold of Justice Gorsuch, the complexion of our highest court will change considerably.