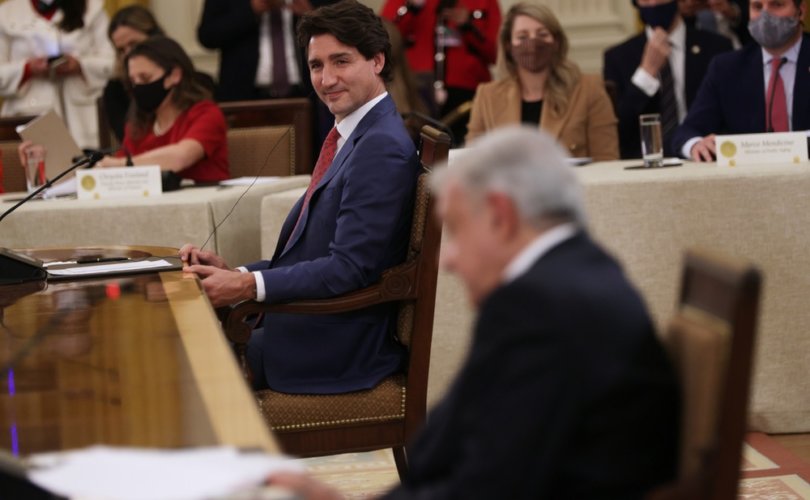 (LifeSiteNews) – While freezing hundreds of private bank accounts of citizens opposed to his regime, Prime Minister Justin Trudeau has announced he placed sanctions on Russia in a stand against “authoritarianism.”

Certainly, many people see that Trudeau is being majorly hypocritical when he calls Russia “authoritarian,” considering he has placed financial sanctions on political dissidents and employed military-style force on peaceful protestors and journalists. But I would say he is not just a hypocrite: he is intentionally mocking his own people.

Trudeau knows that he has given himself dictatorial powers. He is aware that freezing the bank accounts of private citizens without a court order is an unprecedented move in Canadian history that violates all precepts of Western society, he just does not care. He is not hiding his newfound tyrannical powers. He is not denying he has them; he is flaunting them.

Placing sanctions on Russia, calling Russia authoritarian, calling out the inhumane treatment of protestors in Cuba, all while expanding his own powers and crushing law-abiding adversaries, is not accidental or a sign of Trudeau’s obliviousness or stupidity. On the contrary, he is acutely aware that he is cut from the same cloth as these other rulers, and he wants Canadians to know it.

He calls out Russia for being authoritarian because he knows he can. He knows that the state-funded media and his World Economic Forum-aligned cabinet will allow him to gaslight Canadians. His own Finance Minister, Chrystia Freeland, has her picture proudly displayed on the WEF’s official website.

Their radical socialist global takeover plot, the Great Reset, essentially employs the tagline, “You’ll own nothing and you’ll be happy.” The slogan is not, “We will own nothing and we will be happy,” because that would imply we are to be governed under the same system as our overlords.

The left’s problem with authoritarians has never been a principled rejection of force, but rather the belief that force is being inflicted by the wrong people. In essence, the modern political left’s underlying principle is, “We should be the dictators, not these other folks.”

Everything else is a complete diversion from this underlying principle. Trudeau has made countless statements about the importance of reconciling with the Aboriginal population, apologizing for past malfeasance, and decrying any semblance of discrimination or maltreatment still occurring.

Yet, when an Aboriginal elder decides to protest her government’s COVID regime, Trudeau has no problem with a horse trampling her. When his own federal police officers are caught celebrating the fact that an elderly woman riding a mobility scooter was crushed by a thousand-plus pound horse, Trudeau says nothing.

When Trudeau condemns Russia, he is really signaling to Canadians that he is above them – that he can condemn what he himself does, decry what he himself loves, and there is nobody of institutional importance who will call him out.

Trudeau being called a hypocrite or a tyrant is not anything he does not already know. What Trudeau really needs to be reminded of is the words of Christ in Matthew 16; “What good is it for a man to gain the whole world but lose his soul.”