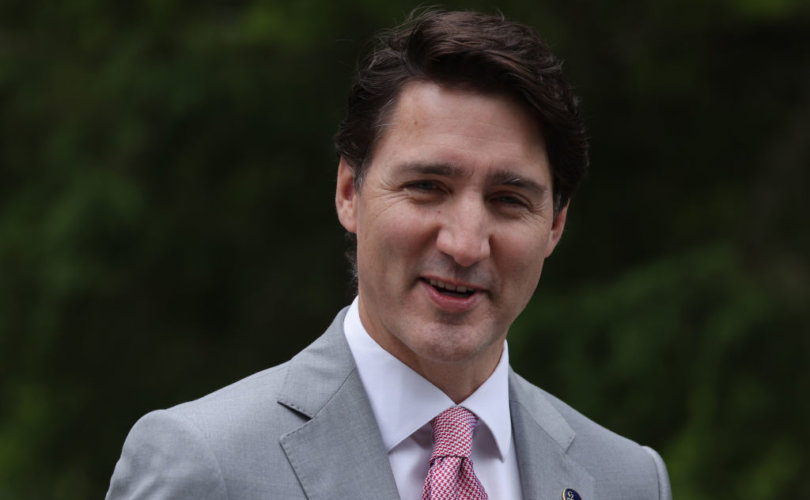 Canadian Prime Minister Justin Trudeau arrives to speak to the media on the third and final day of the G7 summit at Schloss Elmau on June 28, 2022 near Garmisch-Partenkirchen, Germany. Sean Gallup/Getty Images

(LifeSiteNews) – When Justin Trudeau struck a handshake deal with the New Democratic Party (NDP) in March that ostensibly guaranteed him a de facto coalition government until 2025, it seemed like the Reign of Trudeau would never end.

However, as I previously opined, it looks like pressure from across Canada and within Parliament might be pushing Trudeau and his conniving smirk to the edge of resignation, or at least an unwinnable snap election this fall.

As is often the case, the mainstream conservative media is behind LifeSiteNews when it comes to reading the signs of the times, but strong rumours are now circulating that Trudeau knows his time is nigh, and therefore must go or get off the pot.

Toronto Sun mainstay Brian Lilley wrote a couple of weeks ago that the “chatter keeps getting louder” that Trudeau might surprise us all and call an election this fall.

The reason? The longer he stays in power, the more people will grow to hate him, so he has to do something drastic now.

The idea is that Trudeau will call an election almost immediately after the Conservative Party leadership race is finished, and Trudeau will bank on Canadians being nervous about voting for a new government with a leader who has no real leadership experience.

This logic might have some merit, although it is a stretch. I say this because the polls and surveys continue to show us that across the country people are really starting to hate Trudeau.

A poll by reputable Canadian pollster Angus Reid recently showed that Canadians have largely had enough of Trudeau’s “sunny ways.”

The Western Standard wrote that “Trudeau’s approval rating by his most ardent supporters had dropped to a lonely single-digit.”

The poll referred to shows that only eight percent of Canadians “strongly approve” of Trudeau, and only 30 percent “moderately approve.” Compare the paltry moderate approval of Canada’s Substitute Drama Teacher in Chief to the over 40 percent who “strongly disapprove” of his leadership, and we find a nation that is sick of its prime minister.

Now, if it were the case that the amount of disdain for the leader was tempered by an equal love for him on the pro-Trudeau side, then it would be a different story, but what these numbers show is that resentment for the Liberal PM is much stronger than any affection for him.

This also means that even leftists have jumped off the Trudeau train and can only muster some “moderate approval” for the man who was their vaccine segregation hero just last fall.

Trudeau hasn’t stopped courting the left. In fact, he has done everything he can to vilify right-wingers – especially freedom-loving Convoy supporters – and he ensured that the Canadian flag was at half-mast last year for about six months to remind Canadians of the “mass graves” that don’t exist.

He tweeted strongly and unequivocally about his support for abortion, and he has expressed a deeply profound love for Ukraine.

President @ZelenskyyUa and I spoke today. We discussed Canada’s strong and ongoing support for Ukraine – and I reaffirmed our commitment to providing the Ukrainian people and government with the assistance and the equipment they need.

It would seem that Trudeau is doing everything that leftists want, so why aren’t they supporting him as strong as before?

Canadians are abandoning Trudeau for one simple reason: They are broke.

Respondents to the poll expressed how stressed out they are about money.

Almost half of the respondents said their finances are worse off than they were a year ago. And one-third expressed despair about a financial future with “no relief.”

In addition, the data collected by Angus Reid showed that over half of Canadians are “pessimistic … about the future of Canada.”

It is easy to be woke when you aren’t broke, but going woke always leads to broke.

The myth that a government can be “socially liberal but fiscally responsible” is just that, a myth. Simply put, sin is expensive, and the financial sinfulness of the Trudeau regime has led to a period of insane inflation and record gas prices.

No amount of rainbow bumper stickers can win over your base if they are too broke to fill up their tanks to drive to the community centre to vote for you.

Trudeau can clamour on all he wants about “diversity” and “women’s rights,” but when Canadians can’t diversify their portfolios and single moms can’t afford milk – talk is cheap.

Simply put, people hate being broke, and even the wokest will put aside their “isms” when they are having trouble paying for the phone they use to complain about racists on TikTok all day.

This should surprise exactly none of us, however, as leftism is a fickle ideology. The Trudeau MO has been to use public hysteria and sloganeering to hypnotize a mindless electorate into voting for him. This worked well when Stephen Harper was Prime Minister as Canadians were doing better financially than they had in a long time.

It was mildly effective last year when the COVID hypnosis still had enough voters wrapped up in a germophobic hatred of the untouchable, un-jabbed masses. But that is largely over.

COVID is passé, and now Trudeau actually has to do something and stop doing a terrible job. Sadly for him, he is not qualified to do the job, so his time might be up.

It looks like that fickle class of voters he could get to go after the unvaccinated like a hoard of zombies in the Walking Dead might have lost its attention span and instead turned its financially strapped gaze at the man who lost all their money.

It is only a matter of time before Trudeau is done for good.

He is a dead man walking.