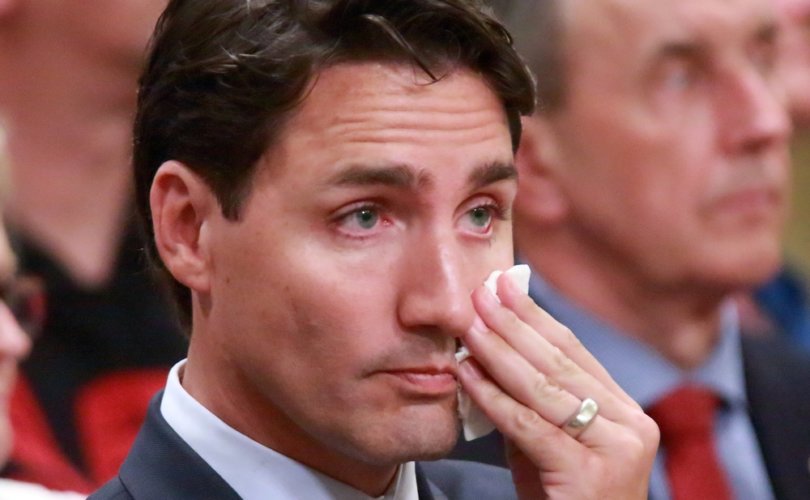 April 6, 2016 (LifeSiteNews) – Justin Trudeau has now been Canada’s prime minister for five months. Those Christians who told me that Trudeau’s term would come and go with no real damage to our country’s moral fabric—whatever’s left of it, anyway—were very, very wrong.

Things have started off rather ominously. For those who like to turn up their noses at warnings that a growing government always crowds into the space of Christians who want to raise their children in peace, consider this fact: The Liberal government has pledged to repeal Canada’s law allowing spanking.

Canada’s Criminal Code, Article 43, states, “Every schoolteacher, parent or person standing in the place of a parent is justified in using force by way of correction toward a pupil or child, as the case may be, who is under his care, if the force does not exceed what is reasonable under the circumstances.” Now, for all those who were ever physically disciplined but feel as if they had loving parents rather than abusive ones, Canadian law could soon disagree.

Then there was the committee appointed by the Liberal government to offer recommendations on ushering in Canada’s new euthanasia regime. While this was ostensibly an “all-party” committee with an aura of neutrality, inside sources have made it quite clear that it was stacked with euthanasia advocates from day one. The recommendations made by this committee shocked even the most pessimistic opponents of legalized suicide, adding further credence to these rumours.

The committee effectively ignored conscience rights by recommending that publicly funded healthcare institutions be mandated to provide euthanasia and assisted suicide, and that objecting doctors must “at minimum” provide their patients with an “effective referral.”

It also recommends that nurses and nurse practitioners, as well as doctors, be called upon to euthanize their patients, or assist them in committing suicide.

But the report also suggests that children, or “mature minors,” be eligible for euthanasia in the second of a recommended two-stage legislative rollout over two to three years…

Recommendation 4 notes that “physical or psychological suffering that is enduring and intolerable to the person in the circumstances of his or her condition should be recognized as a criterion to access medical assistance in dying.”

In other words, we’re not talking about a carefully regulated, narrow, and guarded path towards so-called “doctor-assisted-suicide.” We’re talking about a four-lane highway with no speed limit. The committee recommends that doctors be forced into an accomplice role, that minors be permitted to opt for suicide, and that those suffering from depression or other mental illnesses qualify for death. I can only assume that this will be funded by a rerouting of money that was once allocated to suicide prevention services. After all, who needs them now?

I’m sure we’ll get used to odd new phrases in medical waiting rooms. “Come on in Billy, the doctor will kill you now.”

Canada’s already-radical abortion regime is being reinforced by Justin Trudeau, as well. Prince Edward Island Premier Wade McLauchlan announced last week that his government would be reversing PEI’s longstanding policy of not offering abortions on the island, and that this would be rectified by the end of the year. Joyce Arthur of the Abortion Rights Coalition of Canada rejoiced on Facebook, referencing a source that had informed her of Justin Trudeau’s direct involvement in this development. Trudeau also tweeted out his approval, announcing, “A woman’s right to choose is fundamental in Canada.”

And now, I’m sure, eager fathers can wait anxiously in the waiting rooms of PEI hospitals for the moment when a doctor leans into the room: “Congratulations, it’s dead!”

Finally, of course, there is the killing of the Office of Religious Freedom by the Liberal government, who did not see why such a thing would be necessary. The secular Left, as we have seen since the implementation of gay “marriage” in the United States, does not acknowledge that any such concept as “religious freedom” exists in the first place. An office dedicated to protecting this non-existent liberty, then, is in the Liberal mind rather like a conservation area set aside for unicorns.

Justin Trudeau has only been the prime minister for five months. If social conservatives thought things couldn’t get worse, they were wrong. They can, and in all likelihood, they will. But over the next four years, social conservatives should be rebuilding. We should be involving ourselves in nomination races. We should be paying close attention to the Conservative leadership race, where the Red Tory faction of the party will be determined to send so-cons back to the political Siberia Stephen Harper cleverly created for us. We should be reaching the culture with the truth wherever opportunity presents itself, and we should be creating opportunities daily.

For decades, the response of Christian communities to the Culture of Death and the erosion of religious liberty has been, for the most part, pitiful. The rise of Justin Trudeau’s Canada is going to demand much more of us. This time, we don’t have a choice.

Trudeau applauds PEI: ‘A woman’s right to choose is fundamental in Canada’

Trudeau jumps into the homosexual parade

‘Canada is back’: Trudeau Liberals push abortion agenda at UN