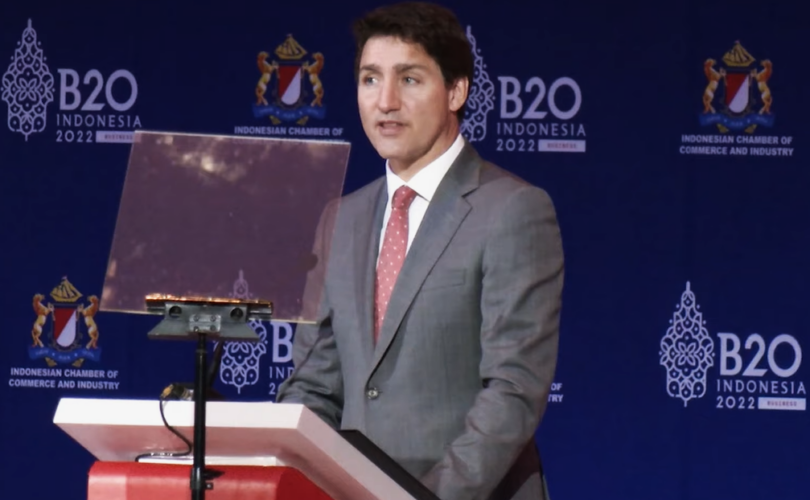 (LifeSiteNews) – Justin Trudeau said in a speech at the B20 Summit in Indonesia a week ago that he believes in “always ensuring and defending free speech,” unless people “bully and attack people online,” and he called on Big Tech to sort out the problem.

Trudeau explains that he believes in free speech unless it’s free speech he doesn’t like. pic.twitter.com/48qt10mZl6

Now, before we are accused of promoting bullying or attacking people online, let me say that of course all people should act morally, and any undue vitriol directed against another person is likely sinful and unwarranted.

However, if you understand Mr. Trudeau, then you understand that him saying anything about believing in natural rights is as much a fit of gaslighting as a hillbilly bonfire.

We are talking about the man – a loosely used term – who screamed and shouted about the unvaccinated as he declared them unworthy to travel domestically on planes, boats and trains.

So many takeaways from these two clips from last summer. Trudeau insinuating unvaccinated as dirty, promoting segregation like it’s a good idea & normal, but what stands out is how he never got called out on why vaxxed people can only be with other vaxxed people to be safe. pic.twitter.com/bw1g4DcLwv

This is the same man who said in an interview in the winter of 2021 that unvaccinated Canadians were intolerable and “take up space,” apparently taking a page from Mein Kampf in his rhetoric.

And let it not be said that his words and leadership style did not influence Canadians, as one deranged individual decided during the Freedom Convoy that Winnipeg protesters against jab mandates should be mowed down for taking up too much space and holding unacceptable views.

Trudeau called for Canadians to marginalize the unvaccinated. He said they should not be tolerated. He said they were racist, misogynist, violent. Someone heard that, believed it, and was radicalized. And committed this act of terrorist violence. pic.twitter.com/0FTxIMWsy7

But, of course, the goodly vaccinated citizens were righteously angry at the unvaccinated ones – even the ones with natural immunity and who weren’t sick – just as Mr. Trudeau said.

Reminder – Canadians are ‘angry’ with the unvaccinated: Trudeau https://t.co/iaZEbkwvKv pic.twitter.com/2lEzQ7N81p

Getting back to Trudeau’s statements about free speech, I should add that I am not a free speech absolutist, as I am not an absolutist when it comes to any set of rights. This is because rights are attached to duties. For example, I have the right to work because I have the duty to support myself and my family.

Inherent in an understanding of natural rights is that they all exist in conjunction with one another, and therefore the exercise of any given right cannot in all circumstances be absolute.

If I were to say, scream like a Trump-deranged leftist while someone else was trying to make a point during a debate, then I would be usurping another person’s right to speak, and confusing my right to speak with an unadulterated license to say whatever I want, whenever I want, regardless of decorum and social norms.

All potential and common-sense restrictions to natural rights notwithstanding, the idea that a prime minister should say that amorphous bullying or online attacking should be regulated by Big Tech is absurd.

Perhaps Mr. Trudeau can tell us what online bullying looks like …

Would it be bullying for me to post pictures of him dressed in black face?

Would it be bullying for me to say that Trudeau has failed Native Canadians and has contributed to a national division that puts him league with the 20th centuries most infamous dictators?

What if I lovingly referred to him as the Wicked Witch of the North? Would that constitute a fit of bullying and an attack on the prime minister?

Ultimately, this man is a fraud and a gaslighting charlatan who sold Canada “sunny ways” and instead brought in a winter of economic and moral despair, and who can’t stand when people call out his dictatorial nonsense for what it is.