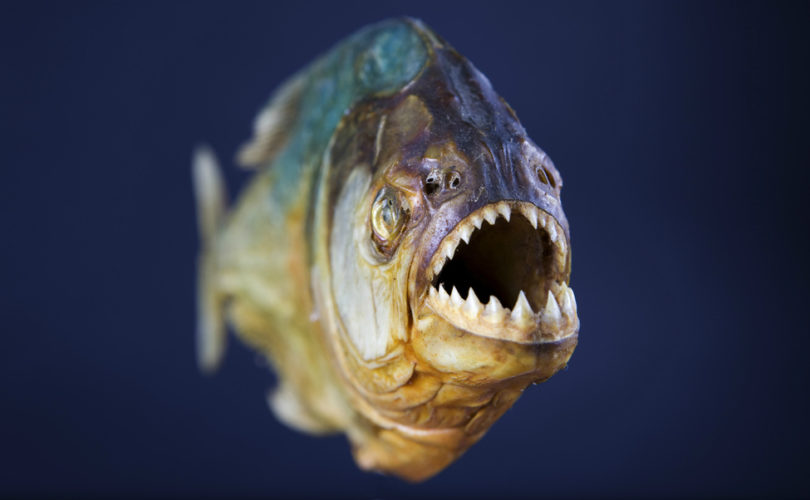 Few consider the implications of giving doctors the right to kill.Shutterstock

Jan. 27, 2015 (LifeSiteNews) – Reading the news these days, I’m reminded of a practice used for generations by the inhabitants of the Amazonian jungles. When crossing rivers with their cattle, they would need to ensure that the razor-toothed piranhas wouldn’t detect them splashing through the water. So a weak, old, or sickly cow would be led upstream and forced into the water. As the piranhas shot in for the kill and reduced the hapless animal to glistening bones in a matter of minutes, the rest of the herd would cross the river before the piranhas were done devouring the scapegoat. One dies so the others can escape without being noticed.

It’s hard not to get the feeling that the same thing is happening in our culture right now. Euthanasia, for example, is creeping in with barely a whimper. Sure, the same few tireless anti-euthanasia warriors who have fought this in the courts for decades are still trying to rouse people to action. But who else seems to care, really? Many church communities feel secure in the knowledge that they run their own faith-based care facilities and thus their beloved elderly ones will be safe. Others take their aging parents into their own homes if the time comes, and so do not think such policies will impact them.

Few consider the implications of giving doctors the right to kill.

Each time a rule is broken, society shrugs its shoulders, and says, “I’ll allow it.” And the piranhas are kept busy for just a little longer.

Because that’s what boils down to. Those advocating for truncation of human lives are carefully sanitizing every term so we won’t notice what is actually happening. The promotion and facilitation of suicide as a “medical option,” for example, is now nauseatingly referred to in virtually every media outlet as “physician-assisted dying.” Rather than pointing out that doctors are ending the lives of patients and discussing what could go wrong in such scenarios, we’re told that we would be inhumane to deny people “death with dignity.”

We should know, instinctively, that this is all rather disturbing. Andrew Coyne highlighted this brilliantly in the National Post when he asked whether doctors preparing to give the “patient” a lethal injection would have to sterilize the needle. I wondered in a column last week how doctors summon the next victim from the waiting room: “Excuse me, Ms. Adams, the doctor will kill you now.”

Those advocating for euthanasia ceaselessly appeal to our humanity, begging us to consider someone in the final, agonizing stages of dying, insultingly insinuating that there can be no dignity in such circumstances. They let slip their true beliefs, lurking just beneath the surface of their eye-watering words: Their lives aren’t worth anything anymore. They have no quality of life anymore. Let them die with dignity. Or, just as accurately: Let us kill them with medical efficiency.

In reality, it is humanity that is being lost. We no longer believe in human exceptionalism, because the underlying belief here is that we have no soul. That once the poison finishes coursing through our veins and we breathe our last, that’s it. Curtains closed. There’s no sense that death might not be the end, and that self-murder being our final action might have consequences. That’s why it’s okay to talk about putting Grandma to sleep like some beloved family pet. There’s no awe for the precious gift of life, and no solemn reflection about what implications these actions might have for the life beyond.

But we’ve come a long way down this road now. Decades of horror stories leaking out of the abortion industry have not swayed those who championed its legalization—with a few prominent exceptions. That euthanasia is being used not as a last resort, but as suicide-on-demand in Europe is ignored by those who argue that for the dying to have dignity, they must die faster. More specifically, we must kill them. And we Christians plod stolidly on, deluding ourselves in the belief that the piranhas will not eventually turn their attention back downstream.

Whether or not one believes that humans have souls, and that there is life after death, surely we can all agree that giving medical professionals the right to kill people is a horrifying mistake. Surely we can look across the ocean to countries who have already been where we are, at this moment, and chose to step forward into a world where the depressed, the disabled, the blind, the old, the very young, and even the unwilling can be dispatched by doctors. Each time a rule is broken, society shrugs its shoulders, and says, “I’ll allow it.”

And the piranhas are kept busy for just a little longer.