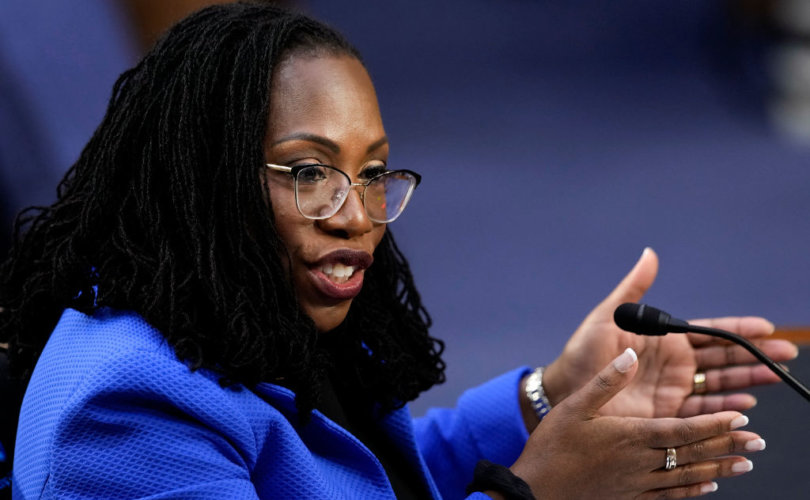 WASHINGTON (LifeSiteNews) — Were the United States Senate a serious institution, the past few days’ worth of confirmation hearings for Judge Ketanji Brown Jackson would have been more than enough to get her nomination withdrawn in favor of someone remotely fit to sit on the United States Supreme Court. Sadly, seriousness is not a concept the nation’s capital understands.

So far, Jackson has disqualified herself on at least two major grounds, the first being her record of relatively light sentencing for possession of child pornography. National Review’s Andy McCarthy has gone out on a limb to defend Jackson on this point, arguing that the sentences she handed down in representative cases were well within the range of what prosecutors and/or the U.S. Probation Department had asked for.

McCarthy’s argument might have been persuasive … until Jackson opened her mouth and suggested that the ease with which images of tormented and degraded children can be acquired ought to somehow mitigate the penalties for acquiring them. That, combined with a 1996 Harvard Law Review article in which she argued that community notification of the presence of registered sex offenders in a neighborhood “subjects ex-convicts to stigmatization and ostracism, and puts them at the mercy of a public that is outraged by sex crimes,” indicates that Jackson’s record on the issue runs deeper than some unfortunate legal technicalities.

After asking Ketanji Brown Jackson about a specific ruling dealing with child pornography, @DickDurbin refused to let her answer @tedcruz's question. And Senator Cruz wasn't having it. pic.twitter.com/6OWHRpdSGZ

The second is Jackson’s refusal to answer incredibly simple questions, from claiming not to know when life begins to claiming she can’t define “woman” because “I’m not a biologist.” If we took her responses at face value, they would mean that she’s too scandalously ignorant to preside over traffic court, let alone the Supreme Court.

It’s much more likely, however, that Jackson does know the correct answer to both questions, but is pretending not to because the correct answers are inconvenient to her ideological fellow travelers. Simply put, leftist dogma’s dominant legal and biological fictions require her to play dumb, so she’s happy to do so. After all, the only politicians, jurists, academics, and journalists whose approval she needs and respect she desires are all in on the same jokes, so it’s not as if the farce will hurt her in their eyes.

But for any senators who take their jobs seriously, they should have already seen enough. If a judge is willing to go this far to deny simple, incontrovertible facts for the sake of ideology, no more inquiry is necessary to conclude she would treat legal text, statutory history, and authorial intent with similar abandon.

Again, however, the Senate is not a serious institution. Given its narrow Democrat control, it is virtually guaranteed that Jackson will be confirmed, meaning that conservatives should focus our efforts on the two things we can influence: first, by demanding that Republicans lay down the law for their squishier senators that there will be consequences for anyone who crosses the aisle and gives Democrats the ability to call Jackson’s confirmation “bipartisan” (we’re looking at you, Mitt Romney).

Second, conservatives and Republicans need to mount a full-court press to publicly brand Jackson as an unfit extremist, any majority opinions to which she contributes as suspect, and Joe Biden and the Democrats as having abused their duty to the Constitution by putting yet another left-wing activist on the nation’s highest court. Alas, Washington, D.C.’s seriousness deficit is by no means confined to the Democrat Party, so how much of the above the GOP will do remains a very open question.