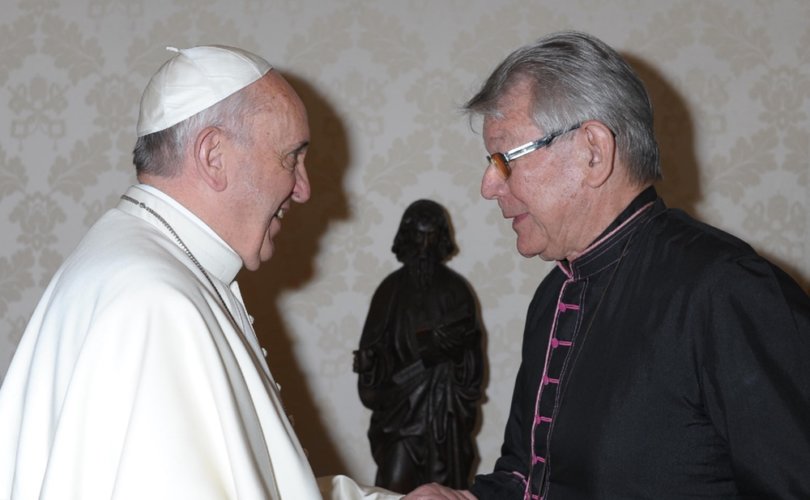 July 16, 2019 (LifeSiteNews) – Bishop Erwin Kräutler – a member of the preparatory council of the upcoming Amazon synod and a key author of the synod's controversial working document – said he has “hope” the synod will approve the ordination of female deacons along with the priestly ordination of married men.

Kräutler made it clear in his July 14 interview with the Austrian TV channel ORF, as well as in a recent talk in Austria, that allowing women to become deacons would be the “first degree of Holy Orders” and could ultimately lead to women becoming priests within the Catholic Church.

“The fact is that our 800 parishes [in his Diocese of Xingu, Brazil, where he is the retired bishop] are led by laymen, and two thirds even by women,” he said. The priest “comes by only two or three times a year, and this I consider to be a scandal.” These parishes have the Liturgy of the Word, but not the Holy Eucharist.

“When two-thirds of these parishes are led by women,” he continued, “why can they then not also obtain ordination and preside on Sundays over the Holy Eucharist? Does one then have a man [priest] who comes and pushes the woman away, even though she led the parish for years and with competence and with much empathy? And then a man comes and pushes her away. I cannot imagine this.”

When asked which ordination he is thinking of, Kräutler answered: “at least the female diaconate, that is what we hope for at the Amazon synod. The first degree of Holy Orders. And then we can see.”

When asked if he thinks such a move is “realistic,” the bishop answered: “Yes I do.”

Kräutler suggested regarding the ordination of women that the Pope could leave the decision up to individual bishops or bishops’ conferences.

When asked by the journalist as to why, during his work as a bishop in Xingu, there were so few vocations in his diocese, the Austrian prelate responded that “the real reason is celibacy.” He explained that he did ordain “a few priests,” but half of them later left the priesthood because of celibacy.

Speaking about how he lived out his celibacy, Bishop Kräutler said that he had “never wrestled with celibacy,” adding “of course it is not so easy,” and that there are times of loneliness, “where one would like to talk with someone.” But, he continued, “the decision has been made.”

Kräutler also explained that he has “absolutely no difficulties” if married priests were to be introduced in Austria, adding that “we can well imagine how it will look here in ten years.”

“The time is ripe” for such a change, he stated.

The bishop describes himself as a liberation theologist and claims that this approach is “intimately biblical” and that it is about “helping the poor and those who are excluded,” and this is a concern of “the Pope, too.”

In his recent talk in Dornbirn, Austria, Bishop Kräutler said that “the litmus test of the [Amazon] Synod will be whether we will reach the goal that at least (with quotation marks) the diaconal ordination become possible for women.”

Here, he pointed out that, since 1919, women have been permitted to vote, yet in the Church, “there are still two types of people.”

“In the Church,” the Austrian bishop said, “we have an above and a below. And this is not what Jesus meant. Jesus emancipated women.”

When the ORF journalist asked Bishop Kräutler what he thinks could come out from the Amazon synod, he answered, “that regional bishops' conferences receive the right to ordain to the priesthood married men.” He then followed up his answer by stating that women who are “totally available for their parishes, but have families,” should “at least” be “ordained as female deacons,” adding that this “would be at least a beginning.”

In his 1994 Apostolic Letter Ordinatio Sacerdotalis, John Paul II  declared that the Church has “no authority whatsoever to confer priestly ordination on women and that this judgment is to be definitively held by all the Church's faithful.”

In March of 2018, Pope Francis had called Bishop Kräutler into the preparatory council of the October 2019 Pan-Amazon Synod, and he has since been often traveling to Rome for consultations. He is also one of the key authors of the June 17 working document (Instrumentum Laboris).

The working document has been strongly criticized by a number of high-ranking prelates within the Catholic Church.

One other consultant of the Amazon Synod is Father Justino Sarmento, an indigenous priest from Brazil. He said in a recent interview with ORF  that when they came together in the Vatican for some consultations, “there was always talk about women. Subsequently, Cardinal Baldisseri asked: 'You tell us that in the Amazon, women play an important role among the indigenous people. Why is this not showing in the preparatory document?'”

Father Sarmento explained: “Thus it is important to me that women say themselves who they are, how they live and what they do, as indigenous women, also in the Church.”

The priest makes it clear that female ordination is a topic in the pre-synodal discussions: “In the meantime, there have been made also some proposals, with the help of which we want to be heard. That contains especially to the vocation of ordained ministers for the [Liturgy of the] Word and the Eucharist.”

As LifeSiteNews reported, one pre-synodal meeting that took place in June in Rome afterwards published a statement, in which it asked for female deacons and married priests. Bishop Kräutler was among the participants.