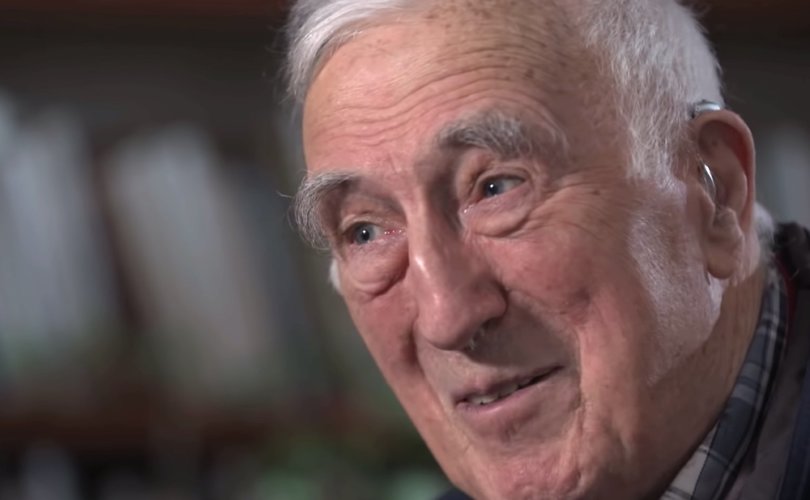 February 24, 2020 (LifeSiteNews) – With recent revelations of sexual abuse committed by the venerated founder of L’Arche, Jean Vanier, and the founder of the Community of St. John, Père Marie-Dominique Philippe, both of whom wrote many influential books and have international followings, our attention is turned once again to the mystery of iniquity: the human propensity to sin, and the need for humble reliance on God’s grace if we are not to fall into the worst vices, no matter how high we may have ascended in the spiritual life, or how proficient we may be in the science of theology.

The great masters of the spiritual life, from the Desert Fathers down into modern times, tell us repeatedly that those who have achieved a certain level of virtue become subject to new and more subtle temptations. Vigilance can never be relaxed. Pride and vanity must be suppressed every day. And those who think they have gotten past carnal temptations may find themselves surprised by the residual force of concupiscence, which can tear down years of fortifications overnight.

I used to be puzzled at some of the entries in the Roman Martyrology (see here to learn more about this little-known liturgical book), because they seemed to me to be relatively… unremarkable. In the midst of a catalogue of heroes who suffered the most devilish tortures invented by the malice of unbelievers, we find an expression like the following, on August 6: “At Bologna, the birthday of St Dominic, Confessor, founder of the Order of Friars Preachers, a man of great renown for holiness and learning, who permanently preserved his virginity unstained…”

When I first read it, I thought to myself: “Surely it’s not such a big deal that he preserved his virginity? I mean, that’s got to be pretty common, right?”

I learned over the years more—more than I ever wanted to know—about how the fallen world operates. Nowadays, when I read the same entry for August 6, I think: “Thanks be to God for preserving St. Dominic from unchastity. He was worthy to be the founder of his religious order. He lived the life that he urged others to live.”

And similarly with other entries:

“In England, the birthday of St Edward, King, famous for the virtue of chastity and the grace of miracles” (January 5). “At Bude, Hungary, St Margaret, Virgin, of the royal family of the Arpad, a Dominican nun renowned for her chastity and rigorous penance” (January 18). “At Florence in Tuscany, St Teresa Margaret Redi, Virgin, of the Order of Discalced Carmelites, admirable for purity and simplicity” (March 7). “In Iona, an island off Scotland, St Egbert, Priest and monk, a man of wondrous humility and chastity” (April 24). “At Rome, St Philip Neri, Priest and Confessor, Founder of the Congregation of the Oratory, remarkable for his virginity, his gifts of prophecy and miracles” (May 26). “At Rome, St Praxedes, Virgin, well versed in all that concerned chastity and the divine law, who after passing her life assiduously in watching, praying and fasting, rested in Christ” (July 21).

What lessons these simple entries in the Martyrology teach us! A king, a political ruler, can indeed be chaste—that is practically a miracle in its own right. Only if chastity is a difficult virtue would it make sense to call someone renowned for it; indeed, it is a virtue obtainable only through “rigorous penance,” something the Catholic Church forgot in the post-Vatican II dismantling of penitential practice. Another virgin is said to be admirable for purity and simplicity, which reminds us that a life overly caught up in externals and inadequately rooted in prayer will always fall into impurity. A monk of Iona was wondrous for his chastity because he was wondrous for his humility as well: only the humble man knows his weakness and his dependence on grace to conquer the world, the flesh, and the devil. St. Philip Neri, another great founder of a religious order, shone for his gift of virginity. This was possible only because he consistently used all the means of sanctification the Church offered him. St. Praxedes was “well versed in all that concerned chastity and the divine law”—in other words, she made it her daily study to know what God commanded and to fix her mind firmly on the living of it, come what may. And how did she succeed where others have failed? She “pass[ed] her life assiduously in watching, praying, and fasting.” There is no other way.

If one puts together the libertine mentality of the Sexual Revolution, the general rush towards hedonism and comfort in the Western world, Paul VI’s supremely foolish abolition of serious penitential discipline in the Catholic Church, and the collective turning of religious orders against the ascetical wisdom of the saints, one ends up with a hothouse environment for sins against temperance, chastity, and purity. We are reaping the rotten fruits now in stifling abundance.

Pope Francis has said that sins of the flesh are not the worst sins. He is correct; St. Thomas argues the same. The sin of pride is the worst sin; it is the sin of Satan par excellence. But sins of the flesh happen to be the easiest sins for human beings to fall into, and the most common, since we carry around with us the wound of disordered concupiscence, the lex fomitis or “law of kindling,” ready to catch fire at the smallest spark. Moreover, regardless of how common they are or how easy to fall into, these sins, if unrepented, still lead to hell. The Blessed Virgin Mary at Fatima stated that most souls go to hell because of sins of the flesh. In addition, these sins readily combine with other sins and lead to worse vices (e.g., avarice in the pornography industry, murder from abortion, arrogant rejection of the Lord’s call to conversion). In that sense, sins of the flesh are like a gateway drug.

The great saints showed us how seriously they took chastity. St. Francis of Assisi used to roll around in the snow or throw himself into a thorn bush when experiencing temptations against chastity. In his early years as a hermit, the devil once raised up in St. Benedict’s imagination a powerful temptation of the flesh; the man took off his garment and rolled in briars and nettles until he bled. After this, he was never troubled in the same manner. St. Bernard leapt into an ice-cold pond for the same reason.

We find this kind of scene again and again in the lives of the saints: they were not wimps and they knew they had to fight sin with (so to speak) nuclear weapons. No peace, no arms reduction treaty, can ever be made with the forces of evil within us or outside of us. If we abandon our weapons, we will succumb to sin.

This does not mean—not necessarily—that everyone has to go around hurling himself into thorn bushes. What it does mean, however, is that we must take seriously the need for physical self-discipline and spiritual combat if we ourselves do not want to become the next scandal splattered across the internet.

As Fr. Dwight Longenecker said in an excellent column on February 22, we should not have illusions about the depths of human wickedness when man is left to his own resources, or when, tragically, he lives according to his own inclinations. We can predict what the results will be; the pages of history are full of them. The only way a saint is made is by God—by the grace He gives through the sacraments of the Church, by our daily prayer to Him, by penance done for Him. This is what the Martyrology reminds us of; this is what Lent, each year, gives us a salutary opportunity to do.