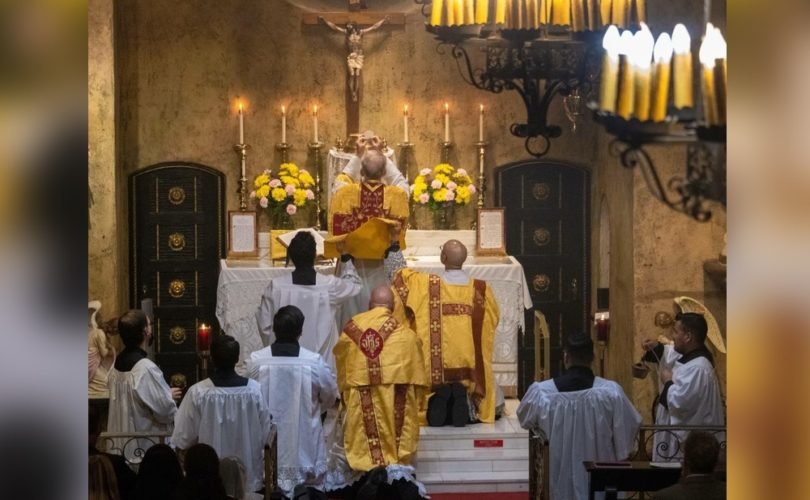 (LifeSiteNews) — An international group of lay scholars and Catholic organizations on Tuesday launched a website and published a list of prominent Catholics in support of a recent September 8 statement declaring they will not accept Pope Francis’ motu proprio Traditionis Custodes which is essentially trying to abolish the Traditional Latin Mass.

Together, they request that the Pope “reverse his decision, by abrogating Traditionis Custodes and restoring full freedom to celebrate the Tridentine Mass, for the glory of God and the good of the faithful.”

“We will not let anyone deprive the faithful of this treasure which is first of all that of the Church,” the statement said. “We will not remain inactive in the face of the spiritual suffocation of vocations laid forth in the Motu proprio Traditionis Custodes. We will not deprive our children of this privileged means of transmitting the faith which is faithfulness to the traditional liturgy.”

The statement had been originally published on September 8 by several French Catholic organizations, prominently among them Notre Dame de Chrétienté, the group organizing the yearly pilgrimage to Chartres. Among the original signatories at the time were well-known authors and activists, such as Henry Sire and Peter Kwasniewski. Philippe de Villiers, a French former minister, LifeSite’s Paris correspondent Jeanne Smits, as well as numerous other French personalities and outlets had signed. My husband and I were honored to have been able to sign, as well.

The traditional Catholic newspaper The Remnant then published the text in English with the full list of the 43 original signatories, as did other outlets, such as OnePeterFive.com and Rorate Caeli, expressing their public support of it.

On Tuesday, the initiative launched a website for others to sign, as well. Signatories now come from many different countries, including Canada and the U.S., Germany, France, Italy, Spain, South America, and elsewhere.

The intention of this statement is very clear. It tells Pope Francis that he will face disobedience and strong resistance should he try to take away the source and foundation, the very center of the traditional Catholic Faith, the Traditional Latin Mass. Catholics worldwide will not obey this false order.

On the Feast of Our Lady of Mount Carmel, July 16, Pope Francis had published his motu proprio Traditionis Custodes and its accompanying letter, in which he claims that many members of Latin Mass communities worldwide sow “disunity” by rejecting the Second Vatican Council and by believing that they are the “true” Church. Pope Francis claims that a recent questionnaire among the bishops in the world has confirmed the existence of such attitudes among the traditional Catholic communities.

However, many are questioning that those were the results of the questionnaire, and Pope Francis so far has not shown himself to be willing to provide evidence for his claim. As Rome-based journalist Diane Montagna reported in June of this year concerning the results of the Vatican questionnaire: “Approximately thirty percent of the world’s bishops responded to the questionnaire, and more than half of those who responded had a favorable or neutral response, multiple sources confirmed.”

Based on the alleged results of his questionnaire, the Pope concluded that the Traditional Latin Mass has to disappear. He told the bishops in his July 16 letter: “Responding to your requests, I take the firm decision to abrogate all the norms, instructions, permissions and customs that precede the present Motu proprio, and declare that the liturgical books promulgated by the saintly Pontiffs Paul VI and John Paul II, in conformity with the decrees of Vatican Council II, constitute the unique expression of the lex orandi of the Roman Rite.” In the end, according to Pope Francis, traditional Catholics “need to return in due time to the Roman Rite promulgated by Saints Paul VI and John Paul II,” that is, the Novus Ordo Mass.

It is clear that Pope Francis does not wish for traditional Catholic communities to flourish, but the September 8 statement — now endorsed by dozens of new signatories — makes a firm stance in defense of the traditional Mass. We will not let it be taken away from us and our children.

“The explicit will of Pope Francis, stated in the Motu Proprio Traditionis Custodes, of July 16, 2021, is to see the celebration of the Mass of the Tradition of the Church disappear,” the September 8 statement reads. “This decision drives us to great dismay.”

Marco Tosatti, one of the signatories, told LifeSite “I think that it is really important to try and defend the right of the Catholic people to worship according to a rite which has been performed for many centuries, and in which they find a way of spiritual enrichment.”

“The Church should be, must be, a place of freedom,” he added. “Not of irrational, whimsical despotism.”

“I signed the statement for two reasons,” said Catholic author, podcast host, and teacher Taylor Marshall. “Firstly, the Traditional Latin Mass was never abrogated. Because of this historical fact, the Catholics priests of the Roman Rite can and should celebrate the ancient Mass of the Ages as guaranteed by Pope Benedict XVI. Secondly, the draconian measures of Traditionis Custodes essentially sideline the former Ecclesia Dei bodies (FSSP, ICKSP, etc.). These good priests and religious have grown in size and influence and must continue to grow. The motu proprio appears to freeze them as well.”

Dear Brothers and Sisters in Christ,

It is with great sadness that we learned of Pope Francis’ decision to abrogate the main provisions of the Motu Proprio Summorum Pontificum, promulgated by Pope Benedict XVI on July 7, 2007. After decades of divisions and quarrels, that Motu Proprio was, for all the Catholic faithful, a work of peace and reconciliation.

Rome violates the word given by Pope Benedict XVI with brutality and intransigence, far from the much vaunted fraternal welcoming.

The explicit will of Pope Francis, stated in the Motu Proprio Traditionis Custodes, of July 16, 2021, is to see the celebration of the Mass of the Tradition of the Church disappear. This decision drives us to great dismay. How can we understand this rupture with the traditional Missal, a “venerable and ancient” actualization of the “law of faith,” which has bore fruit through so many nations, so many missionaries, and so many saints? What harm is done by the faithful who simply want to pray as their ancestors had done for centuries? Can we be unaware that the Tridentine Mass converts many souls, that it attracts young and fervent assemblies, that it arouses many vocations, that it has given rise to seminaries, religious communities, monasteries, that it is the backbone of many schools, youth groups, catechism activities, spiritual retreats, and pilgrimages?

Many of you, Catholic brothers and sisters, priests, and bishops, have shared with us your failure to understand this and your deep sorrow: thank you for your many testimonies of support.

To promote peace within the Church, in order to build unity in charity, and also to lead Catholics to reconnect with their own heritage by making as many people as possible discover the riches of liturgical tradition, the treasure of the Church: those were the goals pursued by Summorum Pontificum. Pope Emeritus Benedict XVI witnesses his work for reconciliation destroyed during his own lifetime.

In a time steeped in materialism and torn by social and cultural divisions, liturgical peace appears to us as an absolute necessity for the Faith and for the spiritual life of Catholics in a world that is dying of thirst. The drastic restriction of the authorization to celebrate Mass in its traditional form will bring back mistrust, doubt, and it heralds the return of an agonizing liturgical war for the Christian people.

We solemnly affirm, before God and before men:

We will not let anyone deprive the faithful of this treasure which is first of all that of the Church.

We will not remain inactive in the face of the spiritual suffocation of vocations laid forth in the Motu proprio Traditionis Custodes.

We will not deprive our children of this privileged means of transmitting the faith which is faithfulness to the traditional liturgy.

As children to their father, we request Pope Francis to reverse his decision, by abrogating Traditionis Custodes and restoring full freedom to celebrate the Tridentine Mass, for the glory of God and the good of the faithful.

Bread rather than stones.

on the feast of the Nativity of the Blessed Virgin Mary