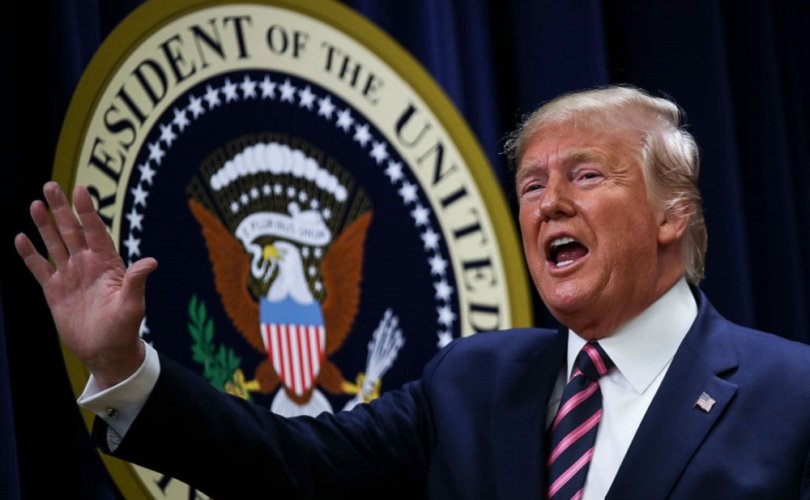 December 20, 2019 (Radiance Foundation) — Christianity Today — which relies on the name of its founder Billy Graham but increasingly not his wisdom or character — has called for the removal of President Donald Trump because of his “immoral behavior.” The Editor in Chief, Mark Galli, was not ambiguous in this proclamation: “Trump Should Be Removed From Office.” Well, we don't remove Presidents for mere immoral behavior. That would've required the removal of all of them. There's a reason why the Constitution is the Law of the Land and not our subjective and misapplied understanding of Scripture.

Franklin Graham called out the magazine on social media saying, in part: “Yes, @BillyGraham founded Christianity Today; but no, he would not agree w/ their piece. He'd be disappointed.” He later tweeted this revealing fact about his father: “I hadn't shared who my father @BillyGraham voted for in 2016, but because of @CTMagazine's article, I felt it necessary to share now. My father knew @realDonaldTrump, believed in him & voted for him. He believed Donald J. Trump was the man for this hour in history for our nation.”

Christianity Today didn't call for the removal of a Presidential Predator — Bill Clinton. In their 1998 article entitled “The Prodigal Who Didn't Come Home”, they lamented his inadequate “apology.” According to CT, Clinton merely “missed a truly historic moment” with what could've been a “straightforward admission.” But the conclusion of the article really showed the “progressive” magazine's hopes for the impeached President: “At this writing, we expect Clinton to hang tough, to remain the comeback kid he is known to be.”

Then there was the 1974 CT editorial that asked the question “Should Nixon Resign?” In it, there is never a call for removal. “The transcripts show him to be a person who has failed gravely to live up to the moral demands of our Judeo-Christian heritage. We do not expect perfection, but we rightly expect our leaders, and especially our President, to practice a higher level of morality than the tapes reveal,” writes CT. I agree with those sentiments exactly. We should expect so much more from our elected leaders. It is tragic how Christians, too often, repeatedly justify political corruption over personal character all in the name of Party allegiance. The following two sentences show CT's blatant contradiction, though: “Yet the Constitution does not provide for the removal of a President because of moral flaws. To resign would be to leave the presidency for other than a constitutional offense.”

Christianity Today, and many other liberal evangelical outlets, rightfully point out the moral failings in (select) elected leaders. Yet they often fail to apply the same standards to those on the Left, especially when those politicians are advocating issues that CT champions. But where was the call for removal of President Barack Obama? For the first time in history, an American President keynoted a fundraising gala for the leading killer of those made in God's image — Planned Parenthood. Though Obama campaigned on “middle ground” rhetoric regarding abortion, he never sought it as President. In fact, he was the most radically pro-abortion President in history. Eerily echoing Democrat Governor George Wallace's famous segregation declaration, Obama proclaimed at the gala: “Planned Parenthood is not going anywhere. It's not going anywhere today. It's not going anywhere tomorrow.” The response from the crowd was thunderous applause. He ended the speech to the organization that kills over 330,000 of the most marginalized and most victimized in our society: “God Bless Planned Parenthood!”

But enabling and supporting the shedding of innocent blood apparently isn't enough for Christianity Today to have called for the ousting of President Barack Obama. That behavior wasn't immoral enough for his removal.

I wish the evangelical Left were just as concerned about Christians' support of the immoral behavior of movie and music celebrities, whose lifestyles are heavily funded by those who should value “loyalty to the Creator of the Ten Commandments.” Why is this outrage relegated only to political leaders?

CT does the same thing as mainstream media. They promote a simplistic narrative in order to demonize an entire demographic. In this instance, they claim that evangelicals who support Trump “brush off Mr. Trump's immoral words and behaviors in the cause of political expediency.” I never have. I find his past and even some current behavior reprehensible — whether it's marital infidelity, unpresidential rally remarks or demeaning tweets. I find the Left's obsession with demonizing and distorting his every action and word equally as immoral. Slander is a sin, too, people. I'll never be invited, like many of my colleagues, to the Trump White House. I've never been a Trump apologist, but I will defend the rule of law. I know the alternative to a Trump presidency would've been a Hillary Clinton presidency. I didn't choose the lesser of two evils. I chose to vote my conscience with a Party platform that aligns with my faith and common sense.

I'll keep praying for Trump…and every other morally flawed politician who doesn't have the privilege of daily denouncements.

As a Christian who happens to be an evangelical, I'm not worried about what CT laments as the consequence of not removing Trump from office: “It will crash down on the reputation of the evangelical religion.” I don't live for an “evangelical religion.” I live for Christ. If Trump, or any other President, were actually found guilty of high crimes and misdemeanors, I would fully advocate his or her Constitutional removal. This sham impeachment process is not it.

Until then, I consider this partisan feigned outrage more of the predictable noise from the Left that we'll continue to hear through the 2020 elections and beyond.