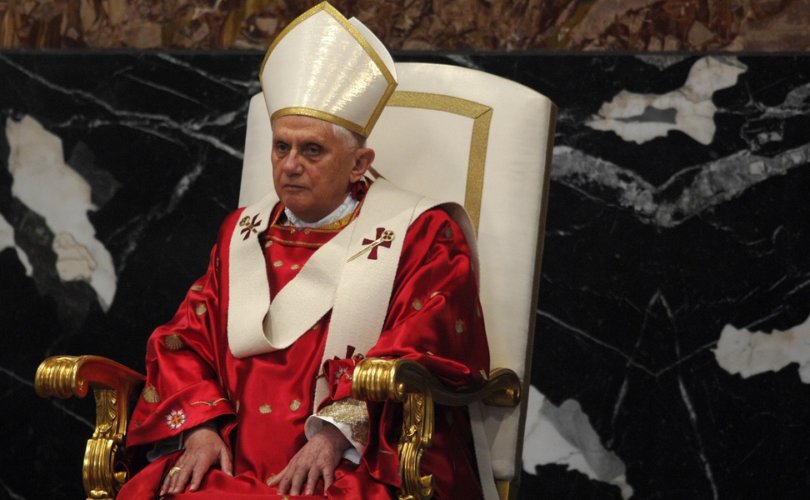 Update Sept. 21: One of the quotes from Benedict's letter has been amended in light of the full release of the letters published here. Die Bild had put in brackets “[than to resign]” in one of the quotes. Providing this context was not, in fact, accurate. These brackets have been removed.

September 20, 2018 (LifeSiteNews) – Today, the German tabloid newspaper DIE BILD published excerpts from a letter that Pope emeritus Benedict XVI wrote in November 2017 to a German cardinal who had criticized him for his 2013 decision to resign his papal office. In this letter, the retired Pope defends himself, showing himself even angry.

He writes: “I can very well understand the deep-seated pain that the end of my papacy has inflicted on you and many others. However, for some people and – it seems to me – also for you, the pain has turned into an anger that no longer merely concerns my resignation, but increasingly also my person and my papacy as a whole. By this, a papacy itself is now being devalued and melted into the sorrow about the situation in which the Church currently finds itself.”

With these words, Pope Benedict acknowledges some sorrow about the Church's current state. That had been exactly one of the comments made by the unnamed German cardinal, who has previously said that the Church entered a major crisis because of the Pope’s resignation. In this cardinal's eyes, a resignation by a Pope was unprecedented in Church history and has seriously damaged the Church.

However, in his letter, Pope Benedict seems more vexed that the cardinal criticized him for his resignation. He wrote: “If you know a better way and therefore think that you can judge the one [actually] chosen by me, please tell me.” The letter is signed “Benedict XVI.”

Additionally, the retired Pope also comments, “Let us rather pray, as you did at the end of your letter, that the Lord will come to the aid of his Church.”

It is interesting to see the Pope's response to the cardinal's criticism. It seems that Benedict still does not have any afterthought that his resignation might be the cause of a piercing worsening of the Church's situation which causes the anguish of many Catholics, laypeople and clergymen alike. Why does he not think today, that it would have been better for the Church if he had stayed in office and instead directly faced some of the corrupt networks in her very ranks?

It might have been more encouraging if we would see now a Pope with a troubled conscience, rather than seeing one who is more concerned that his decision to resign could hurt the reputation of his papacy. Yet, one must say that the resignation did affect how we now see the whole papacy, because Pope Benedict decided not to stay with his flock and defend it. Rather, he surrendered. As with a military battle, the whole battle will finally be assessed according to the outcome of that event.

Pope Benedict continues his self-defense in his letter when he also points to other popes in the history of the Church who stepped down. He even dubiously refers to Pope Pius XII (1876-1958) who, in 1944, supposedly aimed to avoid being “arrested by the Nazis” by stepping down.

As the BILD comments: “What is interesting is the comparison to a Pope threatened by the Nazis. Whom did Benedict feel threatened by?” It then reminds the readers of a prayer said by Benedict XVI at his own inauguration: “Pray for me that I may not flee for fear of the wolves.”

Armin Schwibach – who is a professor of philosophy and the Rome Correspondent for the Austrian news website Kath.net – explained what the Pope might have meant with these words: “By ‘the wolves,’ he probably meant the network of high-ranking Church dignitaries who have created a system of power, and abuse of power, in the Vatican, and whom he felt unable to cope with.”

Since we are now more and more faced with a system of doctrinal, moral, and financial corruption that is coming to light and that has enmeshed or encysted itself into the very bosom of the Church, the discerning words by Professor Schwibach ring true and make more sense.

However, what does not make sense is that Pope Benedict would now merely refer us to prayers to God for help instead of also considering his own conduct – his cumulative acts of commission and of omission – in light of the crisis, which worsened after his resignation. As some would say, this reminds us of a father who abandoned his family which afterwards fell into deep distress, and who, when criticized for his own conduct, asks, “What else could I have done?” and merely refers us back to our prayers.

If I picture myself being Pope Benedict XVI, I think I would have issued an apology in my letter to the unnamed cardinal.

1
Canadian doctor sounds alarm over 13 ‘sudden’ deaths among physicians since COVID jab rollout
2
The jabbed aren’t just unprotected against COVID, they’re also suffering the most
3
Cdl. Burke warns of ‘advancing apostasy’ in the Church during Latin Mass homily
4
After raid heard ’round the world, the choice is between Constitutionalism and de facto Communism
5
4-year-old girl announces her ‘gender transition’ at ‘pride’ parade
Subscribe to Daily Headlines »