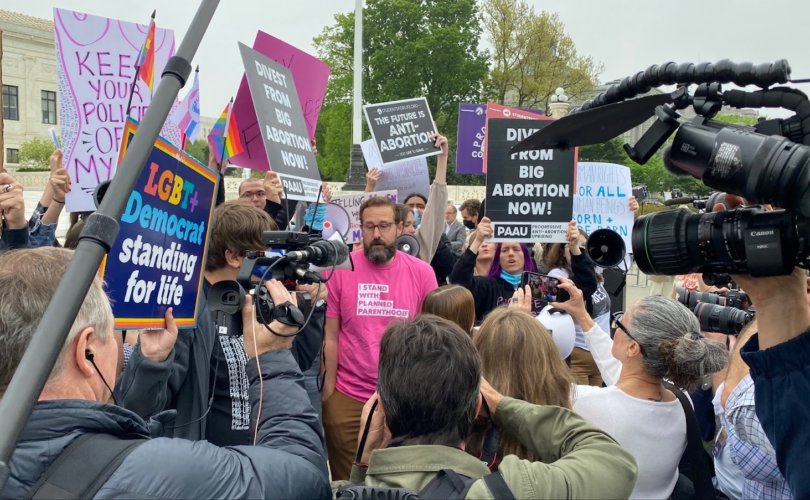 (LifeSiteNews) — Following the leak of the U.S. Supreme Court’s draft abortion decision overturning Roe v. Wade on Monday evening, media and law school academics are apoplectic over what may be the fragile future of same-sex “marriage.”

Liberal elites are right to be scared because they know that, like Roe, the court’s 2015 Obergefell decision preventing states from banning non-conjugal “marriages” was built on sand.  As such, the right to “gay marriage” exists on shaky ground. As a matter of law and constitutionality, it should be overturned.

In order to amp up public emotion, progressive pundits and academic activists quickly went even further, suggesting that contraception may be outlawed and civil rights in general may be taken away.

“This opinion, if it becomes official constitutional law, would be a tipping point in a direction quickly sliding us backwards, really almost to the early part of the 20th century in terms of what the Constitution protects and how it limits state action that trammels what we now take for granted as fundamental rights,” said Columbia Law professor Katherine Franke, who directs the school’s Center for Gender and Sexuality Law.

Here’s a sampling of the hair-on-fire headlines that have been published in the last 24 hours. Each one is meant to sound more alarming than the next in order to attract attention:

Court decisions based in the Twilight Zone, not the U.S. Constitution

Let’s face it: In the same way that the Supreme Court of the United States performed a feat of magic in 1973 and pulled a “constitutional right” to abortion from what some lawyers call the “penumbra” surrounding the U.S. Constitution, the right to same-sex “marriage” has an equally shadowy origin.

“Penumbra” is a term that, until the court’s Griswold v Connecticut decision, belonged pretty much exclusively to the world of astronomy. From the Latin “paene umbra” meaning “almost a shadow,” it is a word that describes the fuzzy, partially shaded outer region of a shadow, for instance, as cast by the earth or moon over an area experiencing a partial eclipse.

The so-called right to take the life of an innocent unborn child could not be found in the Constitution, but the authors of Roe v. Wade were able to justify it according to their own shadowy interpretation of our founding document.

Similarly, the Supreme Court’s 2015 ruling on same-sex “marriage” — and let’s call it what it really is: genderless, anti-conjugal, anti-complementarity, anti-rational “marriage” — has no anchor in the Constitution. It too was pulled from the shadowy twilight surrounding our Constitution, despite the enormous cumulative mass of human history, of every single major world religion and tradition, of biology, of human reason and natural powers of observation that weigh against what five men and women, robed in black, seated on the highest court in the land, have wrought.

One wonders: How had the so-called rights to abortion and to homosexual “marriage” eluded the nation’s brightest legal minds for centuries, until a few justices finally “discovered” these “rights” hidden in the shadows of the U.S. Constitution?

Interestingly, these two landmark decisions that have most damaged society were based not on the Constitution but on a miasma engulfing it in the minds of a few men and women robed in black.

Has Justice Alito drawn a road map out of the Court’s Constitutional Twilight Zone?

“And it is beyond dispute that the right to same-sex marriage is not among those rights,” Alito wrote seven years ago in his dissent to the Court’s Obergefell ruling.

Some legal experts are saying that “the draft opinion in the abortion case provides a ‘road map’ for the court to hold that same-sex marriage is not a fundamental right,” according to the The Washington Post’s Marisa Lati.

“[A]dvocates who oppose same-sex marriage could use Alito’s logic as guidance for new lawsuits attempting to overturn Obergefell.”

Amazingly, pundits are now admitting that Roe and ensuing court decisions are vulnerable to being overturned because they establish rights not found in the Constitution.

“[L]urking just below the surface of that already fraught debate [over the constitutionality of abortion] are questions about other rights experts say could be implicated if the high court overturns its landmark Roe decision, including access to contraception and the legality of same-sex marriage,” wrote USA Today’s John Fritze. “[T]he legal principles that the Supreme Court said in 1973 are the basis for the constitutional right to abortion are the same ones it relied on to recognize other rights not explicitly noted in the Constitution but understood by many to exist.”

Jordan Woods, faculty director of the LGBTQ Law & Policy Program at the University of Arkansas, expressed the same concern.

Alito’s logic in the draft opinion largely mirrors his dissent in Obergefell v. Hodges, which established the right to same-sex marriage in 2015. In both documents, Woods said, Alito mentioned the lack of an explicit reference to the right in the Constitution, the idea that voters should decide, the lack of historical recognition of the right and the problems purportedly caused by the court recognizing the right.

In what amounts to a stunning public recognition that Obergefell, like Roe, are court decisions built on sand, Franke, Director of the Columbia Law School’s Center for Gender and Sexuality Law, told Bloomberg Law:

“Once you kick out the stilts underneath Roe there’s nothing to rest those other decisions [LGBTQ+ rights and the right to access contraception] on … There’s no constitutional foundation for the Lawrence decision saying that criminalizing same-sex sex is unconstitutional, or the Obergefell decision that says same-sex couples have a constitutional right to marry.”