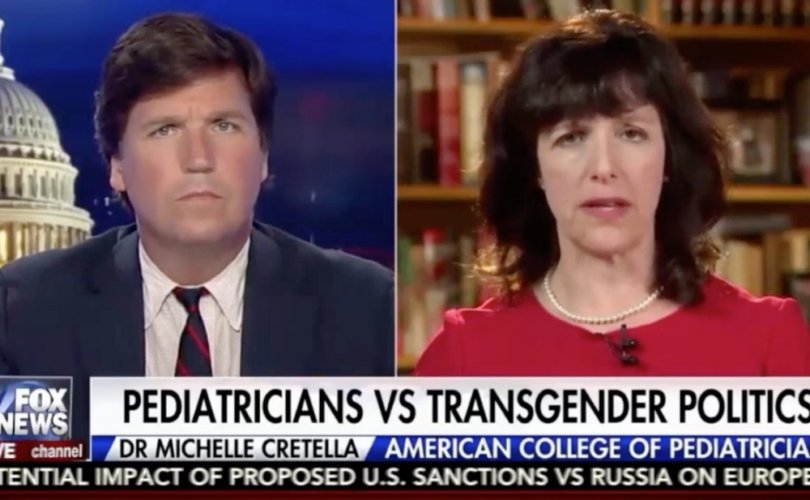 July 27, 2017 (LifeSiteNews) — Fox’s Tucker Carlson brought on a pediatrician in his show this week who discussed the dangers that surgery and hormonal treatment poses to kids trying to make their bodies look like the opposite sex. And, of course, the Left went crazy.

Dr. Michelle Cretella, founder and president of the American College of Pediatricians (ACPeds), told Carlson about the risk of sterilization for such kids.

The American College of Pediatricians holds that the “treatment of GD [Gender Dysphoria] in childhood with hormones effectively amounts to mass experimentation on, and sterilization of, youth who are cognitively incapable of providing informed consent.”

How did the Left respond to Cretella highlighting these concerns on the Fox show? In a piece tellingly headlined, “Tucker Carlson teams with hate group to spread junk science about transgender kids,” Brennan Suen of the left-wing group Media Matters accuses Dr. Cretella of spreading “the myth that puberty-blocking treatment for transgender youth is dangerous and akin to ‘sterilizing children.’””

Carlson had evidently never heard about the risk of sterilization for such kids. But is it a “myth” as Media Matters claims?

Suen’s authority on the matter is none other than Zack Ford, the “LGBTQ Editor” at the leftist, Democratic site Think Progress, who identifies as “Gay, Atheist, Pianist, Proud SJW [Social Justice Warrior].”

Now here’s the kicker: Media Matters, in trying to belittle Cretella and refute her warning that “transgender” “cross-sex” hormone therapy can make one sterile, includes this gigantic caveat: “According to Ford, it is ‘technically true that if a young person goes directly from taking puberty-suppressants to cross-sex hormones, they could risk never being able to produce children of their own, but infertility is not guaranteed.’”

Yeah, you read that right. Such kids “risk never being able to produce children of their own.” Can’t get much more assuring than that!

For the record, here are some more thoughts from an openly “gay” doctor on “transgender” hormone therapies and infertility, from the Buzzfeed article cited by Ford:

“Every medical body that looks at this basically recommends that any consideration of fertility is undertaken prior to initiating cross-sex hormones,” [Dr. Juno] Obedin-Maliver says. “The rationale for that is that we just don't know what long-term effects testosterone would have, say, on egg production and ovarian function over the long-term.” It certainly has happened that trans people have gotten pregnant after years of taking hormones, Obedin-Maliver says, “but I would never counsel someone that if they knew they wanted to have children that that was a surefire bet.”

“For trans women [men attempting to live as “women”], similarly, estrogen does effect [sic] spermatogenesis,” she says. “Have there been trans women who have been on long-term estrogen and have come off of it and been able to produce sperm? Yes. But it takes a long time for the testes to recover, and we're not sure that they will. It's not guaranteed.”

Juno Obedin-Maliver, M.D., M.P.H., is described by Buzzfeed as “an OB-GYN at the San Francisco VA and researcher at the University of California San Francisco, and founding member of the Stanford Lesbian, Gay, Bisexual, and Transgender Medical Education Research Group (LGBT MERG).”

It is no great revelation to assert that major media have been intimidated by the aggressive LGBTQ lobby into freezing out social conservatives from appearing on TV to oppose homosexual and “transgender” activists.

All I can say to Tucker Carlson is: keep digging, you'll be alarmed at what you'll find.