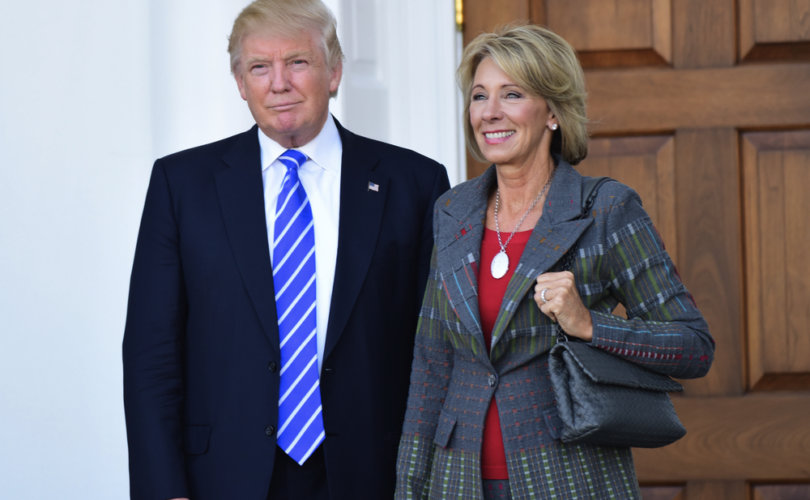 September 20, 2019 (LifeSiteNews) – Every so often, the mainstream media hands us a story that so perfectly displays their contempt for Christians in the United States that it almost necessitates an educational diagnosis. Earlier this week, NBC News produced one such story, sporting the foreboding title “Betsy DeVos visits school with explicit anti-transgender policy.” Trump’s transphobes are on the move, and NBC is on the case.

As it turns out, Education Secretary Betsy DeVos has been visiting various schools this week for a “2019 Back-to-School” tour, and one school she dropped in on was the Harrisburg Catholic Elementary School in Harrisburg, Pennsylvania. While there, she joined a round-table to promote the Educational Improvement Tax Credit, which is designed to assist students from lower-income brackets with scholarships so that they can attend private schools.

But there is more to the story. According to NBC:

While DeVos’ visit most immediately involved the future of the tax credit, it also made a statement about the treatment of transgender students in school, according to education experts.

As HuffPost first reported, Harrisburg Catholic Elementary School has a straightforward policy against transgender students and staff, likening them to those who commit “self-mutilation.”

You’ll notice here that this story is written in such a way that the reader will automatically reach a series of conclusions. First of all, we’re supposed to believe that DeVos specifically selected this particular Catholic elementary school because it has a policy that—shockingly—excludes non-Catholics or those who reject Catholic teaching. The “self-mutilation” the policy takes note of is the surgical severing of the penis and other procedures now referred to casually as “transition” by activists who are positively breezy about these permanent changes to young people (remember, this is an elementary school.)

Even the wording of the policy attracted the ire of NBC’s crack reporter:

If a student undergoes or contemplates undergoing a “sex change procedure” — terminology that has since been deemed out-of-date — the policy states, the student will no longer be able to attend the school as doing so would “violate” the agreement parents make with the school to “not act in opposition of Catholic teaching.” Such students would not be able to enroll at Harrisburg Catholic Elementary School in the first place, or would be effectively kicked out should a student come out as transgender and “chemically and surgically alter their given biology” during their enrollment.

It needs to be pointed out, again, that NBC is complaining that a Catholic school wants to hold its students to Catholic standards, which is sort of the entire point of a Catholic school to begin with. They want to be the sort of institution that Catholics send their kids to in order to ensure that their kids get a Catholic education, which, it must be stressed, involves being informed by Catholic teaching. This is obvious to any reasonable person, and thus we are left with two conclusions regarding the writer who produced this drivel: She is either mean-spirited and prejudiced, or fantastically ignorant.

You’ll notice, too, that NBC was even offended by the term “sex change procedure,” which, as I pointed out a few weeks ago, has been changed to “gender affirmation surgery” in order to reassure people that the amputation of healthy penises and breasts and the prescription of hormone blockers and other drugs is a perfectly natural thing, which it obviously is not. This is all brand-new—many of the reporters who write about these issues had no idea about any of this the day before yesterday. But that was then and this is now, and those who refuse to tow the party line must be publicly named and shamed. Even Catholic elementary schools who stubbornly insist on being Catholic. In fact, NBC even sent a follow-up request for further comment from the school, wanting to know if they permitted cross-dressing (which is also a new must.) These journos would be a joke if they weren’t so dangerous.

The school understandably declined to grant interviews to bad-faith actors with an anti-Catholic agenda, but of course, NBC managed to find some appropriately shrill Democrats and LGBT activists who did the trick nicely:

Eliza Byard, the executive director of the LGBTQ education nonprofit GLSEN, said by using the Harrisburg school as the setting for Thursday’s roundtable, DeVos is “lifting up the school and sending a discouraging and dangerous message.”

“It’s difficult to say whether this decision was one of sheer incompetence, but given DeVos’ track record to direct funds to schools that discrimination, it appears a deliberate decision to champion a school with an anti-trans policy,” Byard told NBC News.

Rep. Katherine Clark of Massachusetts, who serves as the vice chair of the Democratic Caucus, has called for DeVos either to be fired or to resign over her recent school visit.

“The Department of Education is responsible for ALL students. Why are you on a constant crusade against our #LGBTQ students & teachers?” Clark wrote on Twitter, adding the hashtags #FireDevos and #ResignDevos.

Got that? Betsy DeVos’s decision to visit a Catholic elementary school is now a “crusade against our LGBTQ students and teachers,” and her outreach to faith-based schools is “a deliberate decision to champion a school with an anti-trans policy.” When these people regain power, they’re coming after Christian schools, and they will be doing so with a vengeance. Elementary schools—elementary schools, people—are “dangerous” because they oppose attempting to change little boys into little girls and little girls into little boys.

That should tell you everything you need to know about who poses the real danger to religious liberty, freedom in education, and the impressionable minds of young children.