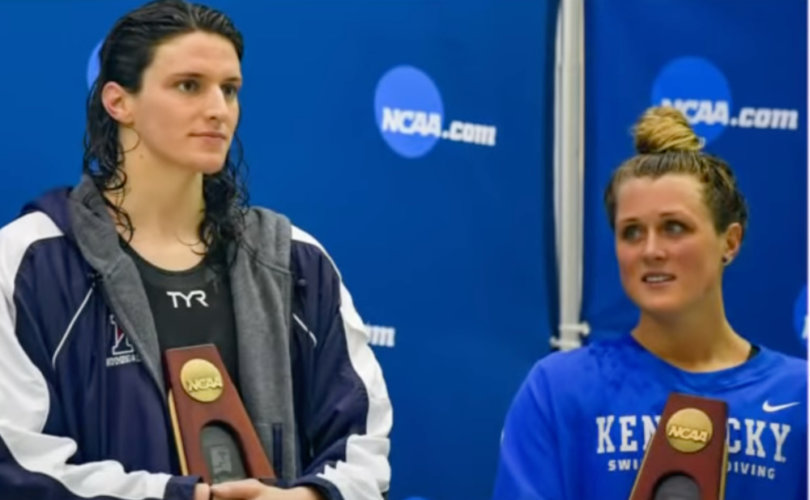 (LifeSiteNews) — On September 17, The Atlantic — a liberal magazine that prides itself on being a bastion of common sense and good writing — published an essay titled, “Separating Sports By Sex Doesn’t Make Sense.”

As one could gather, it was yet another capitulation to the transgender movement’s demands, but this time it provoked outright shock even among liberals.

READ: The ghastly truth about ‘gender transitioning’ is coming out, and liberal elites can’t stop it

The reality is that males have a competitive advantage over females, regardless of how they choose to identify. We saw this with Lia Thomas, the male swimmer who cleaned house in the women’s swimming matches after mediocre placements in the male races.

The same is true in volleyball, where one investigation at an international competition “showed that the serve most used by males was the intimidating and forceful power jump serve. Females, by contrast, utilize the standing serve. The momentum of the body of the server generates extreme power when jumping serves, and that’s naturally a benefit for male athletes.”

In another study, male players “far outperformed females on attacks,” which consists of tips, sets, spikes, or over-the-head hits.

The consequences of transgender policies have become clear time and time again, most recently in North Carolina. From the Education First Alliance:

During a girls’ tournament last month, a Highlands High volleyball player struck a Hiwassee Dam High player in the forehead with a ball. It is reported that the Hiwassee Dam player, a biological girl, suffered severe head and neck injuries, resulting in ongoing concussion symptoms, including vision problems. The girl has still not yet been cleared to play again by her primary care physician or a neurologist.

With a 5-1 vote, the Cherokee County Board of Education declared the event a ‘safety issue’ and canceled all remaining games against Highlands High. The perspective of a longtime coach swayed Cherokee Board Member Joe Wood: ‘I’ll never put a child in a position to be seriously injured,’ Wood said. ‘I think the odds (of injury) in these non-contact sports aren’t high. But in particular, in this meeting, a coach of 40 years said they’d never seen a hit like this. That was really what sealed the decision, at least on my part.’

The coach who had ‘never seen a hit like this before’ saw up close the power of a biological male’s overhand serve into a female’s face, which is apparently what happened.

Board vice chair Jeff Martin: ‘The competitive advantage issue certainly has to come up in any scenario with that type of transgender conversion, per se. I can tell you that the board wasn’t searching out this kind of thing. It was brought to our attention based on safety concerns.’

Of course, these safety concerns are either completely dismissed by trans activists (the implication being that the cost to female players is a price worth paying to admit male players who identify as female) or denied outright.

READ: Girls at Vermont school banned from changeroom for objecting to presence of ‘transgender’ male student

As I noted recently in a column, that attitude extends even to changerooms and bathrooms. In Vermont, a girls’ volleyball team was accused of transphobia after complaining about a male player using their changerooms and making inappropriate comments. The girls were kicked out of their own locker room for raising safety concerns.

The Daily Signal headed to Vermont to interview some of the girls. Listen them describe their sense of panic when a male student watched them take their shirts off and how the school treated them:

NEW: @DailySignal spent this week in Randolph, Vermont, speaking to high school girls who face heavy criticism + potential punishment from their school for pushing back against a biological male using their locker room. Here’s what these girls have to say for themselves: pic.twitter.com/trYW8c6e1z

The female players explicitly call out school officials for lying about what happened, noting that they were, in fact, changing when the male student came into the room, and that they felt uncomfortable that a male ‘with a penis’ was viewing them in a state of undress.

How can any sane person not understand why these girls feel the way they do? How can educators treat them this way? Do none of them have daughters of their own?

READ: Parents are scoring victories against LGBT ideologues who want to corrupt their children

Parents, at least, are outraged. Parental protests have successfully defeated such policies at several schools recently. Hopefully that will be the case here, too. In the meantime, the safety and comfort of girls is, once again, dismissed by trans activists.