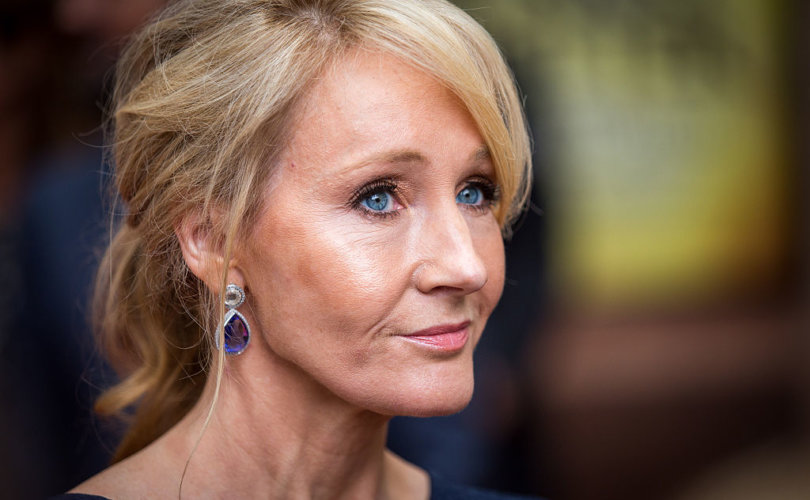 December 19, 2019 (LifeSiteNews) – When I see that J.K. Rowling is trending, I generally assume that she’s said something particularly “woke,” as she is often wont to do. Perhaps a restatement of her support for abortion and the funding of feticide overseas, or another snarky comment about President Donald Trump, or maybe even another revelation concerning the sexuality of one of her famous fictional Harry Potter characters.

But today, to my surprise, it appears that J.K. Rowling has also walked into the tolerance buzz saw, and trans activists are setting “woke” Twitter ablaze with accusations that Rowling is a trans-exclusionary radical feminist (TERF).

Her crime? This tweet: “Dress however you please. Call yourself whatever you like. Sleep with any consenting adult who’ll have you. Live your best life in peace and security. But force women out of their jobs for stating that sex is real? #IStandWithMaya #ThisIsNotADrill“

You can probably spot the mistake she made. Her tweet notes that she is on board with almost the entire LGBTQ agenda—except for the last little bit, where people can be persecuted for saying that men are men and that women are women.

This is a new heresy, and Exhibit A is Maya Forstater, a 45-year-old tax expert who was recently fired over a series of tweets in which she questioned the government’s plan to permit people to identify as whichever gender they choose. She took her case to an employment tribunal and lost, triggering the hashtag #IStandWithMaya. A strange coalition is forming behind the mantra, made up of angry feminists, fed-up conservatives, and, as it turns out, J.K. Rowling.

The details of Judge James Taylor’s ruling against Forstater are particularly concerning. Taylor stated that Forstater’s statements on men being unable to change the biological sex—which is a simple statement of fact—were “absolutist,” and that as such her stated belief that there are only two biological sexes is not a protected belief under the 2010 Equality Act. Even further, Taylor stated that Forstater’s statement of scientific fact was “incompatible with human dignity and the fundamental rights of others,” which apparently include having women like Forstater recognize them as whichever gender they choose.

Taylor went on to say that Forstater was not allowed to ignore the “enormous pain that can be caused by misgendering a person,” and then concluded that:

If a person has transitioned from male to female and has a Gender Recognition Certificate (GRC), that person is legally a woman. That is not something Ms Forstater is entitled to ignore. Ms Forstater’s position is that even if a trans woman has a GRC, she cannot honestly describe herself as a woman. That belief is not worthy of respect in a democratic society. Even paying due regard to the qualified right to freedom of expression, people cannot expect to be protected if their core belief involves violating others’ dignity and creating an intimidating, hostile, degrading, humiliating, or offensive environment for them.

Re-read that again, and let the implications sink in. The belief that someone cannot change their biological sex is, according to this judge, a “belief…not worthy of respect in a democratic society.” Worse, it is not even worthy of protection, and thus someone can be fired for stating something that everyone believed roughly fifteen minutes ago. Forstater, understandably, was stunned by both the decision and the tenor of the judgement:

I struggle to express the shock and disbelief I feel at reading this judgment, which I think will be shared by the vast majority of people who are familiar with my case. This judgment removes women’s rights and the right to freedom of belief and speech. It gives judicial licence for women and men who speak up for objective truth and clear debate to be subject to aggression, bullying, no-platforming and economic punishment.

Keep in mind here that Forstater does not even want to “misgender” anyone, and actually accepts the premise that people can identify however they want, she just does “not believe it overrides their sex. I refuse to believe that human beings can change their sex.” Her lawyers are examining the case to determine if anything can be done, and in the meantime, the judgement has triggered widespread outrage.

And J.K. Rowling, a prominent progressive and one of the UK’s richest women, has apparently also had enough, and she’s joined the #IStandWithMaya campaign. A quick survey of the vitriol she is receiving in response indicates that Rowling is getting a good look at what the #LoveWins crowd is all about, and perhaps she—and the others who are finally putting their foot down and saying that the LGBTQ movement has gone too far—will realize that the ideology they have been supporting not one of tolerance, but of totalitarianism. If you step out of line, they will come after you with a level of hatred and contempt you did not know they were capable of.

Jonathon’s new podcast, The Van Maren Show, is dedicated to telling the stories of the pro-life and pro-family movement. In his latest episode, he speaks with the editor of the National Review Rich Lowry about his latest book, The Case for Nationalism: How It Made Us Powerful, United, and Free. Lowry has authored other books, including New York Times bestseller, Lincoln Unbound and Legacy: Paying the Price for the Clinton Years. Van Maren and Lowry speak about Lowry’s book, where America is headed, “the age of Trump”, the rise of division in our political climate, and the need for maintaining culture in order to maintain a democracy.