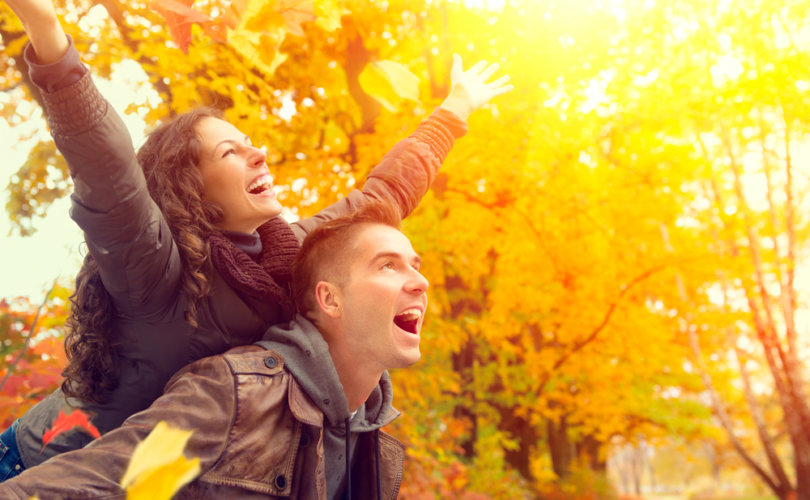 October 8, 2019 (LifeSiteNews) – One of the most consistently interesting things about our cultural debates surrounding marriage and sexuality is the resistance that many of those on the secular side of the spectrum exhibit towards the slowly growing mountain of evidence supporting the fact that our Judeo-Christian values are often essential to both social stability as well as personal happiness. While the soft-core porn mags sold at supermarket checkouts urge young men and women to engage in sizzling sexual experiments and public sex education teaches children to believe that anything is on the table, social studies tell us that we are robbing them of the future many of them desire—or will desire in the future.

Let’s take a look at just two recent reports. The New York Times, as The Blaze noted at the time, “caused an avalanche of anger” after they published a report by the Institute for Family Studies and the Wheatley Institution finding that “the happiest of all American wives consider themselves religious conservatives.”

A tweet sent out by New York Times Opinion was apparently particularly galling: “It turns out that the happiest of all wives in America are religious conservatives, followed by their religious progressive counterparts.”

It turns out that the happiest of all wives in America are religious conservatives, followed by their progressive counterparts https://t.co/jaxXzMkEf7

At first glance, this would seem to be an odd thing for people to get upset about. After all, aren’t strong and happy marriages in any demographic something to celebrate, especially where children are involved? The source of the ire, however, may be found in the title of the report: “The Ties That Bind: Is Faith a Global Force for Good or Ill in the Family?” For many in today’s age of aggressive secularism, the idea that religion could be a potent force for social stability and personal happiness is an offensive one, perhaps because it forces people to address those niggling doubts that perhaps they might be wrong about a very important thing.

In the report, researchers detailed the fact that women who report having “above-average satisfaction with their marriages” are often both religious and conservative, and the New York Times op-ed on the findings noted that “Fully 73 percent of wives who hold conservative gender values and attend religious services regularly with their husbands have high-quality marriages. When it comes to relationship quality, there is a J-curve in women’s marital happiness, with women on the left and the right enjoying higher quality marriages than those in the middle—but especially wives on the right.”

This should not be particularly surprising. Those who believe that marriage is a sacred institution constituting a life-long, monogamous commitment to one person are, generally (and statistically) speaking, going to enter marriage with a radically different perspective than those who believe the whole thing can be called off with less difficulty than a cell phone contract.

If, as many religious people believe, marriage is a covenant rather than a contract, this has obvious implications for both entering marriage and exiting one. If divorce is not seen as the exercise of the opt-out clause in a civil arrangement but rather, as Peter Kreeft once put it, “the murder of the one flesh” union, then the severing of the marital bond is obviously far more significant than our current social norms would have us believe.

The same is true for sexual activity prior to marriage. I recall one older fellow I worked with years ago asking me, with disbelief, how I could conceive of entering a marriage without first sleeping with my partner. After all, he explained, you wouldn’t purchase a car without test-driving it first. Side-stepping the offensiveness of his comparison of a spouse to a car and marriage to the purchase of one (the unspoken and perhaps unrecognized implication that a “newer model” might be preferable down the road did not come up), the evidence simply does not bear out the idea that multiple sexual partners prior to marriage is beneficial to committing to one person for a lifetime. In fact, it is rather bewildering that so many seem to believe that promiscuity is good practice for monogamy.

This, too, was once again proven by sociologist Nicholas Wolfinger of the University of Utah over at the Institute for Family Studies. He found, unsurprisingly, that Americans who had only ever slept with their spouses were by far the most likely to report that their marriage was “very happy.” Conversely, women who had between six and ten sexual partners in their lives reported the lowest odds of marital happiness (thirteen percentage points lower than women who had only reported one partner.) The same proved true for men, who also reported lower marital satisfaction after one partner, although their satisfaction did not dip as low as it does for women.

According to The Atlantic’s report on the study:

“Contrary to conventional wisdom, when it comes to sex, less experience is better, at least for the marriage,” said W. Bradford Wilcox, a sociologist and senior fellow at the Institute for Family Studies. In an earlier analysis, Wolfinger found that women with zero or one previous sex partners before marriage were also least likely to divorce, while those with 10 or more were most likely. These divorce-proof brides are an exclusive crew: By the 2010s, he writes, just 5 percent of new brides were virgins. And just 6 percent of their marriages dissolved within five years, compared with 20 percent for most people.

Other studies’ findings have also supported the surprising durability of marriages between people who have only ever had sex with one another. In this latest study, women who have had one partner instead of two are about 5 percentage points happier in their marriages, about on a par, Wolfinger says, with the boost that possessing a four-year degree, attending religious services, or having an income over $78,000 a year has for a happy marriage. (In his analysis, he controlled for education, income, and age at marriage.)

If our governments were genuinely interested in promoting personal happiness and social stability, public sex education would be conveying the findings of these reports and many, many others that concur.

The ideologues running our education system are not committed to doing what is best for those in their charge, but instead promoting their own set of beliefs—beliefs, it must be pointed out, that have led to a polarized culture with rates of family breakdown unheard of in human history outside of war or natural disaster. Many young people in our society today are searching for answers, and those answers will not be found in what the secular establishment is offering. They can be found in the beautiful traditions we cast aside.

Jonathon’s new podcast, The Van Maren Show, is dedicated to telling the stories of the pro-life and pro-family movement. In his latest episode, he interviews Fr. Frank Pavone, the National Director of Priests for Life, the largest pro-life ministry in the Catholic Church. Van Maren speaks with Fr. Pavone about his experiences as a pro-life priest and leader. Fr. Pavone shares how his dedication to the pro-life movement starting in high-school and continuing while he was in seminary. After he was ordained a priest, he preached about abortion almost every weekend from the pulpit, leading to a profound impact on his parish. You can subscribe here and listen to the episode below: