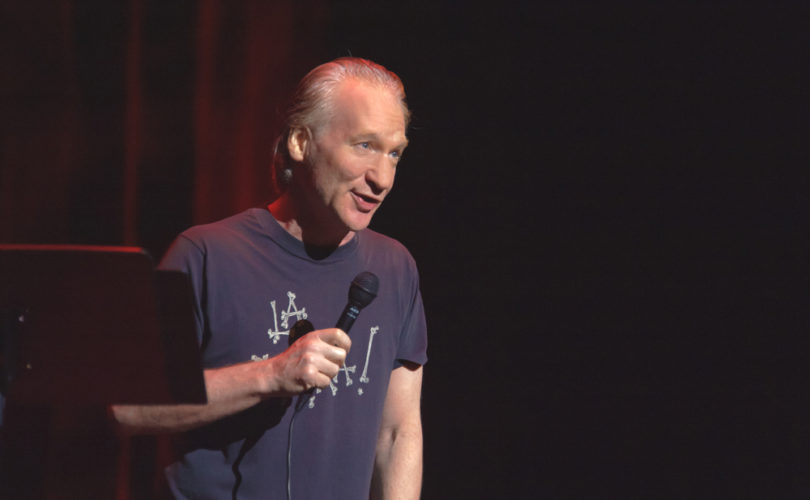 April 26, 2021 (LifeSiteNews) – These days, the revolution is moving so fast even the old school liberals can’t keep up. It’s interesting to see pundits who championed the moral upheaval of the past several decades with gusto and enjoyed mocking the views of the religious discover that the revolution they helped midwife is actually a religiously zealous one, and that the heretic-hunters of our new orthodoxies are lacking the forgiveness that characterizes Christianity.

Late night, host Bill Maher is getting trashed again for “transphobia” for telling jokes about Bruce “Caitlyn” Jenner with his usual crudeness. The former Olympian and trans activist is running for governor of California, and Maher couldn’t resist taking a few shots, noting that Jenner is “trans, rested, and ready” and stating snidely that “I know you think of her as a reality-show star, but come on, people change.” He then joked about Jenner’s surgical castration.

Maher is the sort of atheist who delights in blaspheming, and his noxious anti-Christian sentiments are frequently on display. But mocking Christians to a late-night audience is like preaching to the choir — telling jokes about “transition,” the extreme LGBT baptismal rite of passage that must be treated with the utmost respect, is downright dangerous. His jokes about Jenner were promptly headline news not only in the United States but worldwide, with his “cruelty” and “transphobia” condemned in chorus.

Joy Behar, The View’s reliable leftist, also stumbled onto the tolerance buzz saw on the subject of Jenner’s gubernatorial run. Several times during the April 23 show she referred to Bruce as a “he,” which, to be fair, was what he called himself for the majority of his life. After a commercial break, she promptly apologized. “So first of all let me apologize for my pronoun mixup. I think I just didn’t get enough sleep last night,” Behar clarified. “I had no intention of mixing them up, and I tried to correct it immediately, but whatever, it just came out. So I’m sorry if anyone was upset by that.”

Predictably, people were. Despite Behar’s attempts to correct herself as well as her apology, the Twitterati thundered with moral indignation. “Misgendering” Jenner, she was reminded, was a sin, a concept that no longer applies to the sorts of things we used to call sin but very much applies to not using the appropriate pronouns.

Maher, at least, knows this is all ridiculous, and has thus far refused to stop saying whatever he wants. He does, I suspect, find it somewhat uncomfortable that those on his side of the aisle are the ones attempting to cancel him while conservatives defend him, but strange times make for strange bedfellows. Behar knew immediately she had to apologize but failed to be appropriately groveling and made the mistake of sounding mildly irritated. Self-flagellation is essential to prove the rainbow high priests that sufficient guilt is felt.

But consider for just a moment: A pundit accidentally — accidentally — refers to a biological man who decided, well past middle-age, to identify as a woman as “he” because for nearly his entire public life, that is who he was. These throw-away comments take place on a daytime show for women, and are made by someone who has been a fervent supporter of the LGBT movement for years. And yet, this slip-up is actually headline news in prominent publications across the United States.

I wonder if folks like Maher and Behar ever look at what America has become and somewhere, deep down in their being, wonder if they made a mistake.