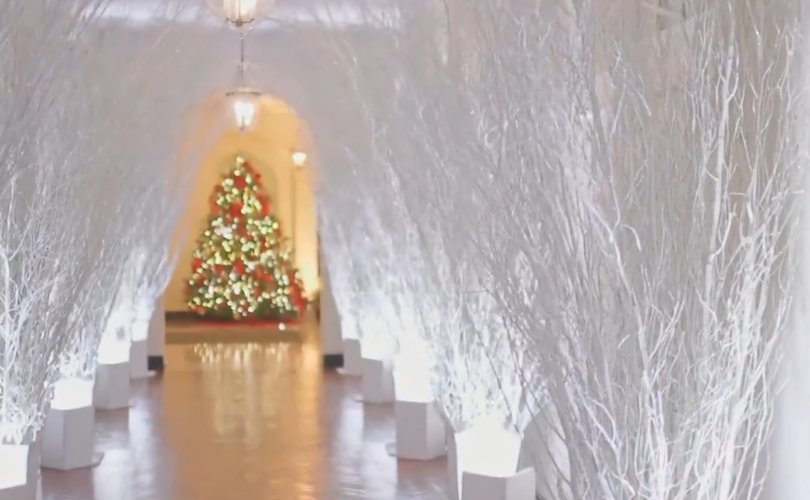 WASHINGTON, D.C., November 30, 2017 (LifeSiteNews) – Liberals, especially those in the media, are using a strangely-lit photo taken inside the White House this Christmas to freak out over the Trump administration.

This Trumps’ first presidential Christmas decorations include a hall filled with white Christmas trees, a 350-pound gingerbread house designed like the South Facade of the White House, and a tree decorated in gold and patriotic ribbon specifically dedicated to service members.

There are rooms filled with cookies, Christmas trees, crafts, and classic decorations.

The Trumps’ Christmas card has also been released. Unlike any of Obama’s Christmas cards while in office, President Trump’s says “Merry Christmas.”

Photos of one of the halls in the White House, which is currently decorated with barren winter branches, have been labeled by the Huffington Post as “spooky.” Leftists on twitter have compared the hall's look to a handful of horror movies.

An image of the hallway lit shows it looks like a normal part of the Christmas decorations.

The holiday decorations are “very, very white,” Vogue observed, wondering if perhaps it “could be interpreted as a snowy and desolate manifestation of [Melania's] own isolation.”

Is she trying to tell us something? Indeed, some of the decorations brought to life an apocalyptic, barren landscape similar to what some of us imagine lies in America’s future, or the calming white walls of a mental institution. One grim hallway in particular, lined with white branches lit from below, created a shadowy portal into, well, who knows?

PJ Media compiled a list of the most hysterical reactions, which suggested the decor are the “walls of the damned,” “nightmarish,” or a scene from “The Shining.”

The multitude of photos available of the White House this Christmas show it’s anything but “spooky” – it appears festive and joyful.

And far from being upset by the winter wonderland decorations, children visiting the White House repeatedly told Melania that she looked like an angel.